'Everyone is in it Together': Running from the Lake District to Mongolia for Climate Action

How far would you go to tackle climate change? In Rosie Watson’s case, pretty far.

In two weeks’ time, the 24-year-old activist will run from the Lake District to Asia in an attempt to change the narrative around global warming.

On 17 August, Watson will leave her parents’ home in Cumbria and take a ferry to the Netherlands, before running up to 40 kilometers a day over the Alps and the Dolomites, across the Balkans and the Black Sea to Georgia, through Kazakhstan, before finally ending up in Mongolia.

Along the way, she plans to tell the stories of people finding solutions to climate change, as well as those having to deal with its impacts. She’s already got plans to look at food waste in the UK, responsible tourism in Albania, permaculture in Switzerland, and the effects of climate change on the livelihoods of Mongolians. While she mainly plans to focus on positive stories of change, she also wants to highlight stories of protest and activism taking place in regions outside of the public eye.

“I’m hoping that it might be good in reaching a different audience. I think, quite often, you end up being in an echo chamber of people who all agree on similar things,” she says. “I think the fact that it will be a personal adventure will access a different group of people. I think that will have an impact. And focusing on individual stories, I hope that will as well.”

She’s not sure of the total distance she’ll travel – she plans to be flexible so she can follow where ideas and contacts take her – but she plans to keep running for at least a year. This means the somewhat daunting prospect of wild camping throughout the winter, although she says she’s been trained by a friend who has spent time in the Arctic.

She’s not the first person to decide to travel long distances on foot in the name of climate change. Climate pilgrimages have become something of a movement among Christian activists: in 2015, Yeb Saño, the former negotiator for the Philippines delegation, walked from Rome to the UN climate conference in Paris. Alongside fellow Catholics, he undertook another 1,500-kilometre journey in 2018 to the UN talks in Poland. 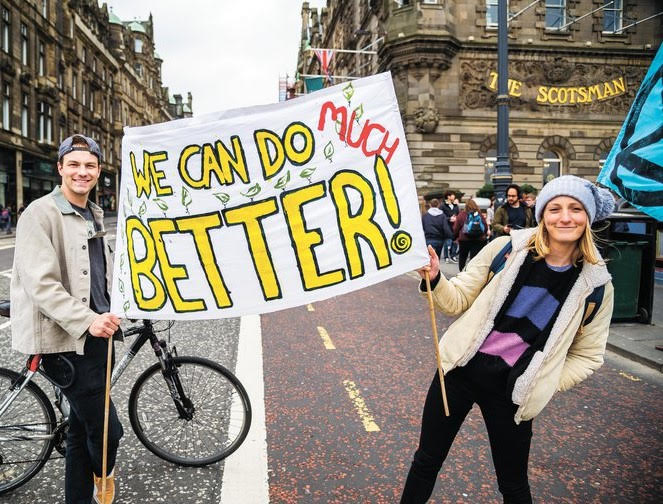 They, however, were walking. Watson has been planning this most ultra of marathons for a couple of years. Initially, she intended to start after finishing her degree at the University of Leeds last summer. However, she admits she “wasn’t really prepared” and took a job at the 2050 Climate Group, an Edinburgh-based charity, instead. Now, she can’t wait to get started – particularly as she sees the impacts of climate change growing more severe.

“I think the protests we’re seeing happening has definitely changed something and it’s pushing momentum forwards,” she says. “But it all needs to happen really quickly, because the world is also changing really quickly. That’s a reason why I just want to get going, because I feel like everyone needs to get on with whatever they’re doing faster.”

Throughout the trip, she will publish stories of the individuals she meets and the stories of their work on her website and across other social media. She believes that highlighting the tales of people across Europe and Asia could help to stem the rise of racism and xenophobia that has increasingly become a part of political discourse.

“There’s been a rise of almost fascism. Lots of politicians have been voted in, like Donald Trump, who paint refugees in a really bad light. I think that’s actually quite linked, because to manage solutions to climate change, we need to see it as a global problem, and there has to be a huge amount of collaboration. We have to really care for people who we might never see on the other side of the world, and see them as human beings,” she says.

“I’m hoping that, by having this personal focus of stories from all over the world, it will show that people care about the same things all over the world and everyone’s in it together. Everyone’s facing the same issues, but we all need each other’s help.”