Comment: Why was the Blackout Used to Attack Renewables? Because Some Media Still Have an Anti-Climate Action Agenda

England recently experienced its most severe blackout in more than a decade, leading to a cacophony of calls from the usual suspects to scrap windfarms and abandon plans to turn the country’s electricity supply from brown to green.

The blackout was caused by two power plant outages last Friday – at the Little Barford gas-fired power plant and the Hornsea offshore wind farm. While National Grid was quick to explain that this was a “rare and unusual event”, the breakdown was used to push an anti-climate action agenda under the auspices of debate over energy policy.

The Mail on Sunday was quickly into its full-swing with an article titled ‘Experts Blame Blackouts on Renewable Energy’.

It contains much that would be expected.

The paper quoted one (and only one) “leading expert”: Jeremy Nicholson of Alfa Energy, and formerly a lobbyist for the Energy Intensive Users Group. Apparently Nicholson said he feared there might be worse to come because of Britain’s growing use of renewable energy.

“Has the National Grid been taking the actions that are necessary to keep the lights on when there’s not much conventional generation on the system?” he added. “This is going to be increasingly frequent in future as our dependence on wind and solar grows.” 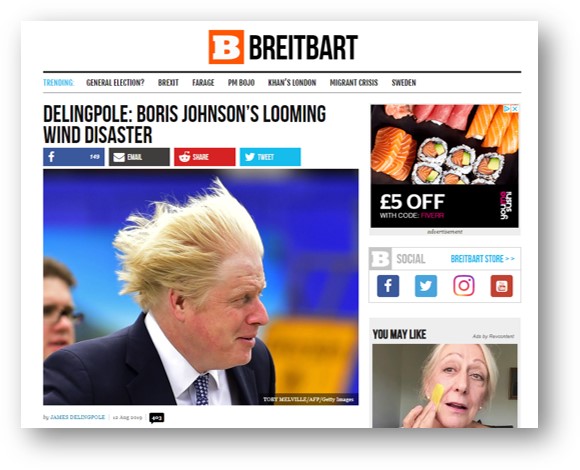 It will come as no shock at all to hear that Nicholson is a regular attendee at shindigs put on by the UK’s number one climate science denial campaign group, the Global Warming Policy Foundation (GWPF).

Playing to form, the article also contained the nugget: “The National Grid pointed the finger of blame at the two foreign companies which own the affected power stations”. Foreign companies, you see. Unreliable.

Delingpole and the circling climate science denialists are keen for a public inquiry to crush the renewables industry:

“The key here will to be ensure that the review is fair, transparent and not a greenwash — something that seems rather unlikely given that the National Grid is a parti pris organisation fully committed to the green agenda.”

“If the review is conducted with any rigour, I find it hard to imagine it could reach any other conclusion than that renewables are making the grid less and less stable and that the idea of incorporating still more wind projects into this overloaded system should be an absolute no-no.”

Energy Secretary Andrea Leadsom came under fire for daring to state government policy: “Only the day before the blackout, Leadsom herself was busily retweeting some nonsense from the Department for Business, Energy and Industrial Strategy (BEIS), bigging up Net Zero, COP26, and the wind industry. She can’t surely believe this drivel. Leadsom’s South Northamptonshire constituency has been hideously blighted with bat-chomping, bird-slicing eco-crucifixes.”

Delingpole much prefers “pragmatists within the Cabinet such as Priti Patel, Jacob Rees Mogg, and Liz Truss.” Funnily enough, all three have a history of climate science denial and/or strong ties to a network of campaign groups based in and around 55 Tufton Street working to slash the UK’s environmental regulations through a hard Brexit.

Bearing in mind that a large part of the blame for the blackout lies at the feet of a gas power plant and chronic under-investment in infrastructure, what then is the solution?

For Delingpole: “Friday’s blackouts could yet prove a blessing in disguise … Even the Prime Minister knows in his heart of hearts that renewables are a disaster and that fracking is the way forward.”

But no anti-renewables furore is complete without Ross Clark at the Spectator, and he didn’t disappoint, cutting straight to the (factually dubious) chase in a piece headlined: ‘How renewable energy makes power cuts more likely’. 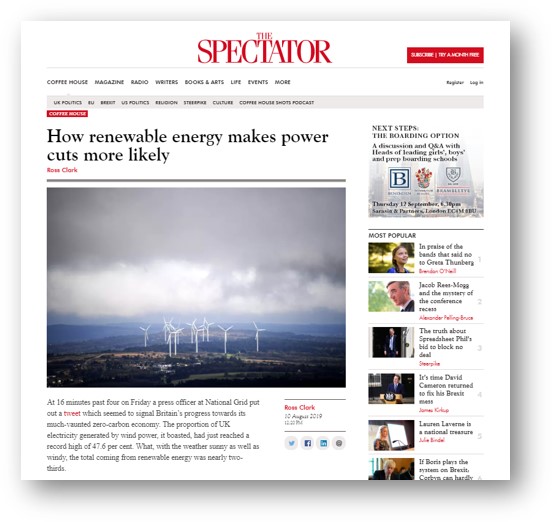 Sure, high volumes of renewable energy can make it more difficult for National Grid to balance the frequency of the grid, which was originally built to accommodate fossil fuel power plants. But to prepare for the UK’s energy transition, National Grid has developed a wide range of tools to ultimately prepare for the full phasing-out of fossil fuel power.

Apparently missing this memo, The Conservative Woman (which largely publishes articles by very right wing men) got in on the action with a doom-laden article about the costs of wind power. The author, Kathy Gyngell, explained with a sort of contorted logic: “a number of large wind farms have contracts to supply power at extraordinarily low prices, ‘but the cost and performance data suggest that they will be unable to cover their costs.”

Once again, the analysis is based on a report from the climate science deniers at the GWPF. Coincidentally, Gyngell  has just been made a director of the GWPF – a fact curiously absent from the text.

So as ever the hyperbole of the climate science denial brigade has been published by the usual suspects under the cover of ‘energy policy analysis’. But it is quickly deflated.

As the Guardian puts it in a handy explainer: “Experts have been clear” that “there is no suggestion that wind power is an unreliable source of electricity.” Some questions do remain, however – just not ones that ideology of the above outlets would permit them to ask.

For instance, why do we have to have a huge national grid? Many people argue for a district heating system and a more devolved system of regional grids.

And should we be looking to nationalise the national grid? Many people believe that the failures stem from cost-cutting not the form of energy supplying.

Finally, how will a government hell bent on pursuing economically ruinous policies actually deliver on the UK’s ambitious climate promises?

These are legitimate questions. But as millions of children know, asking ‘How quickly should we abandon green energy?’, in 2019, with a looming climate crisis, is not one.