Millions of children and adults are expected to strike across the globe today, inspired by Swedish activist Greta Thunberg’s call for climate action.

The strikes are happening ahead of the UN Climate Summit, which is taking place in New York on 23 September.

Climate strikers are calling for a “rapid revolution” to prevent global warming, with fossil fuels phased out fairly and swiftly and everyone has access to a safe future. The concept of “climate justice” is at the heart of their demands, so that vulnerable people aren’t hurt by the dramatic shifts required to transition to a zero carbon world. 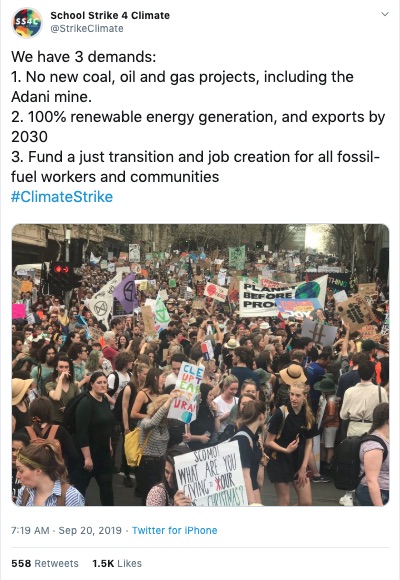 While the idea of school strikes began with students, today’s protest is supported by all sectors of society, with unions, politicians and headteachers all pledging their support.

Australia and the Pacific

Some 300,000-400,000 people turned up in Australia to protest, with strikers posting images of packed streets in Melbourne, Sydney, Perth, and others.

David Ritter, head of Greenpeace Australia-Pacific, hailed the “historic turnout”: It was, he said, “the largest climate rally in Australian history”. 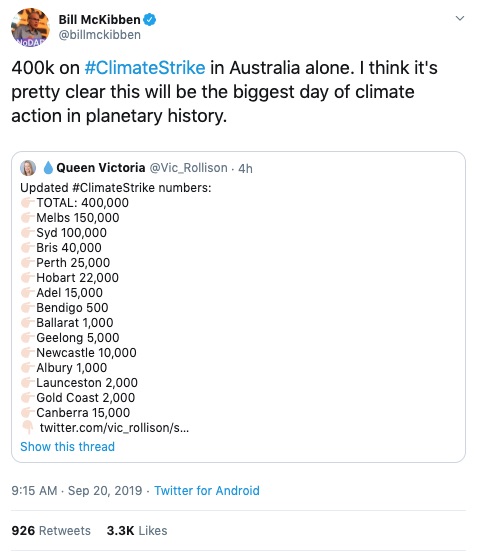 The Adani mine was a major feature of the strikes in Australia. The controversial coal mine got its final approval in June this year. Young people assembled outside the offices of Australian environment minister Sussan Ley, chanting “Stop Adani”.

Protesters also showed up across the small island states dotted throughout the Pacific. For many of these low-lying islands, climate change is already an existential threat, thanks to rising sea levels. The NGO 350-Pacific posted images of strikes across several of these small nations, including Kiribati, Vanuatu, and the Solomon Islands — in the latter case, with activists arriving from neighbouring islands by boat. 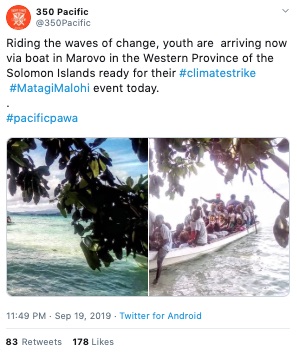 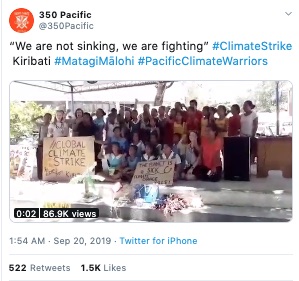 There have also been strikes across Asia.

Journalists posted photos of marches taking place in Dhaka, the capital of Bangladesh. Local news reported that thousands of children had gathered in the city to urge world leaders to act on climate change. 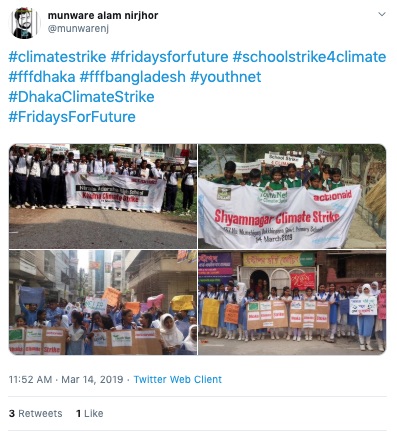 In India, children chanted “I want to breathe clean!” while standing outside the Ministry of Housing and Affairs in New Delhi. The city has a serious air pollution problem, thanks to vehicles and industry, as well as dust from building sites and smoke from burning waste. In Amritsar, a solo striker proved true Greta’s mantra that “no one is too small to make a difference”. 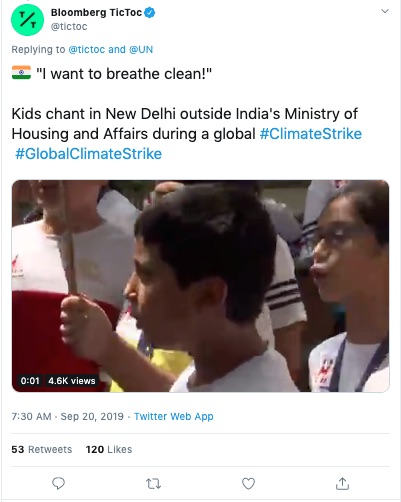 In Tokyo, Japan, protesters assembled at 5:00 p.m. local time (does that make it a strike? I’m not sure), and marched as darkness fell. The local Fridays For Future group encouraged its protesters to wear green. It seems to have been more muted than the protests taking place in other major cities, however. Greenpeace Japan said that just 2,800 people turned up. 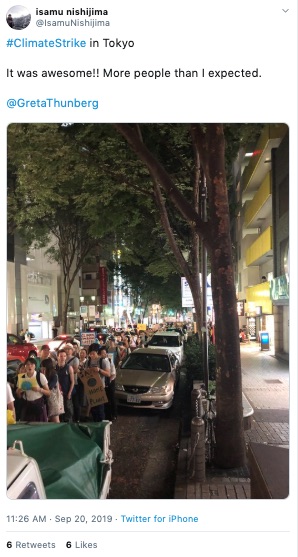 At least seven strikes took place around Nigeria. The BBC reports that turnout in Lagos, the country’s largest city, was low, with around only 30 protesters. But in the capital city of Abuja, hundreds turned up to the strike. One Nigerian youth activist wrote that today marked her 45th week of protesting for the Fridays for Future movement.

Photos showed a large turnout in South Africa, including in Cape Town, Durban, and Johannesburg. 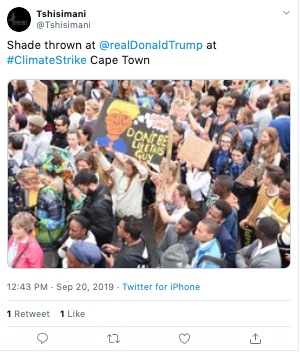 According to a journalist in Uganda, children not only joined the protest there but also planted trees. Another video showed a large march taking place through Wakiso District. 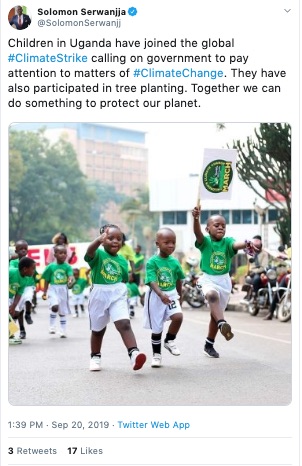 Strikes have been taking place throughout Europe today.

DeSmog’s Soila Apparicio has been meeting protesters in London, UK. Read her report, and see her photos, here.

The issue of climate justice seems to have become really cemented in protesters’ demands. “It’s an issue that deeply affects those who are poor and people of colour especially,” one striker told Soila.

“The failure to act to avert climate catastrophe is the greatest moral failure of our times, and when people look back at this time, it won’t be those blockading roads or striking from school that history judges badly. It will be those that shut their eyes and blocked their ears,” said Lucas, to cheers.

Thousands of people also took part in the capitals of Scotland and Wales.

In Edinburgh, the Scottish Green Party declared the day of action “easily one of the biggest marches ever seen at the Scottish Parliament”.

Around 2,000 people marched through Cardiff, arriving at the Senedd (the National Assembly for Wales) to demand action. Sophie Howe, the Future Generations Commissioner for Wales, accused the government of failing to fund action to tackle the recently-declared climate emergency.

“It is still our younger generations who are leading the debate and holding governments to account on their lack of action to combat climate change,” she said.

Jeremy Leggett posted this video with a note: “Where indeed is the government? I find it agonising to imagine being in the minds of these kids. My God, how my generation has let them down. I and many of my compadres have fought to save them from the worst excesses of global heating and the climate chaos it causes. But we have been pretty ineffectual, and so many others seem to care little or nothing about their future. Time to let the younger generation reset the rulebook, I think.”

Strikers in Berlin are, of course, extra cool. “If you don’t jump, you’re for coal,” say two bouncing men on a stage, in front of a hundred thousand bouncing people below them.

While thousands of people are protesting across other cities in Germany, my favourite protest staged by a German has to be this: a lonely Antarctica striker (At least, I haven’t seen any others.) This picture was posted by Fridays for Future Germany. 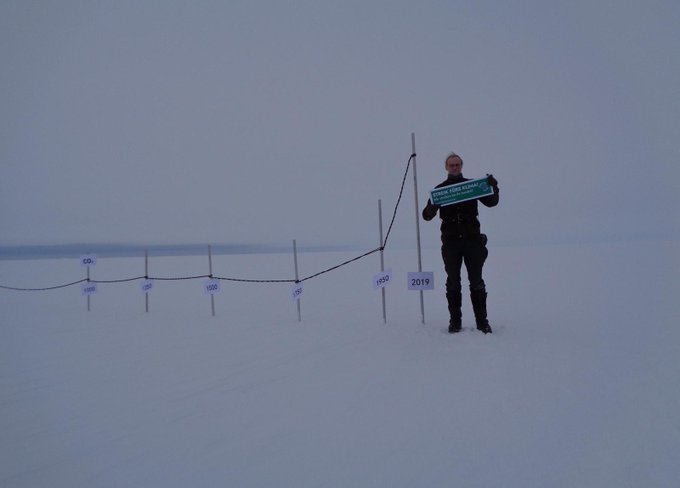 Berlin didn’t have a monopoly on climate strike dancing. According to Greenpeace Poland, thousands of young people from 68 Polish towns turned out to strike today. In Warsaw, 10,000 young people marched through the streets and ended with a dance party in front of the Palace of Culture.

In Russia, the atmosphere was more muted. Protesters in Moscow could not get approval for a rally, so instead had to queue up for individual pickets, which did not require permission. Other cities apparently did give permission, according to Greenpeace Russia.

Still, the restrictive atmosphere didn’t stop the Moscow employees of the NGO, who posed with a #climatemergency banner. “It remains to get agreement 🙂 ,” they tweeted cheerfully.

And now, with the day drawing to a close in Europe, I am going to pass over to Ashley Braun, who will report on strikes across the pond. Climate strikers gather outside the Capitol Building in Washington, D.C.

Things are getting warmed up under perfect blue skies in Washington, D.C., where crowds have been amassing at the Capitol Building with plenty of politically charged signs, as well as calls for a Green New Deal to address climate change with a just transition away from fossil fuels.

A divided Congress, the House dominated by Democrats and the Senate by Republicans, was implored by protesters to “Do your jobs!” Yesterday, Senate Democrats released a list of climate studies buried by the Trump administration, from the U.S. Environmental Protection Agency to the U.S. Department of Agriculture.

Protestors chanting before in front of the capital to government leaders “DO YOUR JOBS!” #ClimateStrike #ClimateStrikedc #ClimateChange pic.twitter.com/LMOtLeq2Tw

According to the New York Times, the New York mayor’s office estimated this afternoon that tens of thousands of demonstrators poured through the city’s streets, which years earlier were flooded by Hurricane Sandy. The teen who inspired the school strikes movement, Greta Thunberg, who sailed to the U.S. to attend Monday’s UN Climate Action Summit, spoke to the energetic masses.

“This is the biggest climate strike in the history of the world,” she declared.

So much energy at the #ClimateStrike in New York! pic.twitter.com/HKeXRMBmpU

Climate demonstrators in Madison, Wisconsin, took over the state capitol, chanting, “People, not profits” beneath the rotunda.

Thousands in Seattle, Washington, marched to city hall, with calls that “This is what democracy looks like!” The climate strikers included an estimated 3,000 tech workers from companies such as Amazon and Google, who took their employers to task for contributing to the climate crisis.

Outside Amazon’s iconic glass-and-steel greenhouse known as “The Spheres,” near their Seattle headquarters, CNN reports that strikers had pointed messages for their employers, including “Great start, Jeff,” reportedly “a reference to an announcement CEO Jeff Bezos made on Thursday that Amazon plans to be carbon neutral by 2040.”

“Hey hey! Ho ho! Fossil fuels have got to go!” Thanks to the thousands of brave tech workers from @Amazon @Google and others who joined today’s climate walkout. https://t.co/AMSoCPMIJy
–#ClimateStrike#ClimateStrikeSeattle pic.twitter.com/M9kVqhU9fy