Climate activists have very visibly taken over central London once again, climbing onto planes and spraying government ministries with red paint. But some are taking a quieter, more legal, approach that looks at the problem from a different slant.

On 9 October, during another week of protests across the world, a group of legal professionals and law students allied to Extinction Rebellion sounded the climate alarm on behalf of their profession by making a formal ‘declaration’ of climate emergency outside the Royal Courts of Justice.

‘Lawyers Declare’ want to highlight how the legal profession and system are key contributors to the climate crisis. The group is calling for climate justice for all people on earth – especially those in the Global South – intergenerational justice and ecological justice for the natural world.

Like our coverage? Keep our reporters on the frontline of the climate crisis by becoming a patron today!

The group had also hoped to make the declaration inside the Inns of Court – the privatised streets in central London that house professional associations for barristers in England and Wales – but was barred from doing so.

One of the group’s founders is Natalie Barbosa, whose journey into climate campaigning began with animal rights activism. She grew up in the “beautiful” Ribble Valley, surrounded by meadows and inspired by the conservation story of Diane Fossey’s Gorillas in the Mist.

But she realised that climate change threatened other efforts to protect the planet: “The stuff that Diane Fossey was doing is not going to be enough in the face of the behemoth that is climate change,” she tells DeSmog.

Barbosa, who has worked as a lawyer for 15 years and was recently listed in the industry’s prestigious Legal 500, describes the legal profession as very conservative and says it hasn’t played as positive a role in tackling the climate crisis as it could. “I was one of those lawyers that when they joined law school I really believed it would make a difference,” she explains. Unfortunately, “UK law has a tradition of looking to the past, not the future.”

The XR Lawyers declaration states that lawyers are “deceiving” themselves that they must wait for others to make law which they will merely interpret. “From the invention of the tort of negligence to the circumstances in which judicial review can challenge executive power, lawyers and judges have historically been innovative in interpreting, developing and even creating whole new areas of law,” it states. 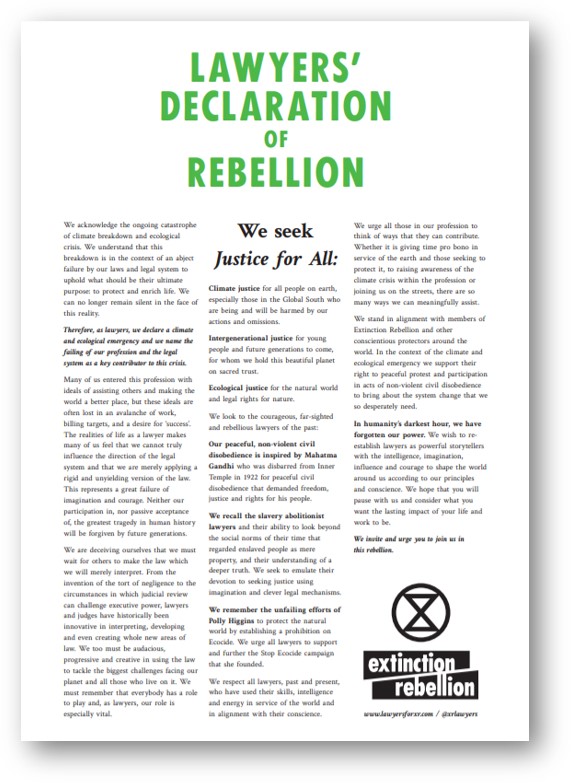 Farhana Yamin, a well-respected environmental lawyer and consultant who has provided legal and policy advice to many different countries and constituencies, is another signatory of Lawyers Declare.

Yamin told the group assembled outside the Royal Courts of Justice that she had thought she was working with other people to create a system that would prevent climate chaos. But she was disappointed, saying all national laws are wholly inadequate to deal with the problem.

In 2009, Yamin was involved in climate talks in Copenhagen, advising the Alliance of Small Island States to push for a 1.5°C warming target. But it took more than ten years for the Intergovernmental Panel on Climate Change (IPCC) took to stress the dangers of exceeding 1.5°C. When it finally did, in October last year, she had had enough and became involved in Extinction Rebellion.

In April, she was arrested after gluing herself to Shell’s headquarters. “Sometimes breaking the law is more important in raising the alarm about how out of kilter the legal system is,” she said.

Although her law firm has been supportive of her interests and activism, Barbosa is aware of the risks to her career of getting arrested – a key Extinction Rebellion tactic. She says prosecution would not automatically result in being struck off but the Solicitors Regulatory Authority is investigating at least one other lawyer involved in Extinction Rebellion after their second arrest.

But Barbosa is more optimistic about the law’s ability to leverage action on climate: “I’m really hopeful that if XR Lawyers and public law projects and other things like that, if we all get our heads together then we might be able to do some really great things.”

Richard Lord QC, a barrister with Brick Court Chambers and another signatory of Lawyers Declare, agrees, saying that across the world progress is being made in the areas of tort law, human rights, administrative law, judicial review and public trust. “When I started writing and speaking about climate change litigation in 2003, it was seen as some far-fetched and fantastical notion. A great deal has changed.”

Climate litigation has become a hot topic over the past five years. The Urgenda Foundation’s win against the Dutch government in 2015, where a court ordered the state to do more to meet 2020 emission targets, was a pivotal moment for the movement. Although the decision is still under appeal (a final decision by The Netherlands’ highest court is expected soon) it inspired similar cases across the world including in Ireland, Switzerland, Pakistan and New Zealand.

The US has seen the biggest swell of cases brought against governments and corporations, but there have been over 50 in the UK too.

Maya Campbell got involved several years ago when she was a politics student at Newcastle University. “I wasn’t that well aware of issues pertaining to climate change at the time. I picked up a book that I thought was sci-fi and it turned out to be Six Degrees by Mark Lynas. That was quite a big adjustment for me in terms of my thinking.”

In 2017, she was asked by environmental charity Plan B to be a claimant in a case against the UK government alongside ten other people – one of them a nine-year-old child. They were trying to force the government to strengthen its emissions reduction targets in line with the Paris Agreement. “I thought it was the perfect opportunity to utilise the courts for something powerful and important because the politicians weren’t picking up the slack,” she says.

Campbell was particularly motivated by the idea of delivering justice for a problem that has disproportionate impacts around the world. She says:

“As somebody that has family in the Caribbean, you hold your breath every hurricane season because you don’t know what’s going to happen.”

“So I liked the way that we did it in terms of a class action, speaking for people that didn’t necessarily have the voice or opportunity to leverage the courts in the way that we attempted to.”

Although the Plan B case was ultimately unsuccessful in court, Campbell feels it succeeded in influencing domestic climate policy. “By the end of the case the government basically had to say ‘We’re going to seek advice on amending our climate change targets’. We shone a light and showed that people are actually watching and actually care.”

After the case Campbell completed a masters degree in law and now works as a legal researcher. She is still a climate campaigner with Plan B and other local organisations.

She says that while climate change litigation is still a niche area of climate activism “it feels like every case, every piece of evidence is a step towards having the right people have those kinds of conversation. I think it will go hand in hand with the unrelenting wave of climate activism.”

And as a young woman of colour, she wants to challenge the image of who can get involved. “When Boris Johnson talks about uncooperative crusties I imagine he’s thinking about a white man with dreadlocks. But I think climate activism is for everyone.”

Many people involved in legal climate activism were inspired by the work of environmental lawyer Polly Higgins, who long campaigned to have ecocide made a crime against humanity. Rather than stalling her efforts, Higgins’ death earlier this year seems to have given them fresh life.

The Stop Ecocide campaign is headed by Jojo Mehta, who worked closely with Higgins for the past four years. “My wake-up moment from armchair activism and signing petitions to actually being on the street was fracking,” she says. 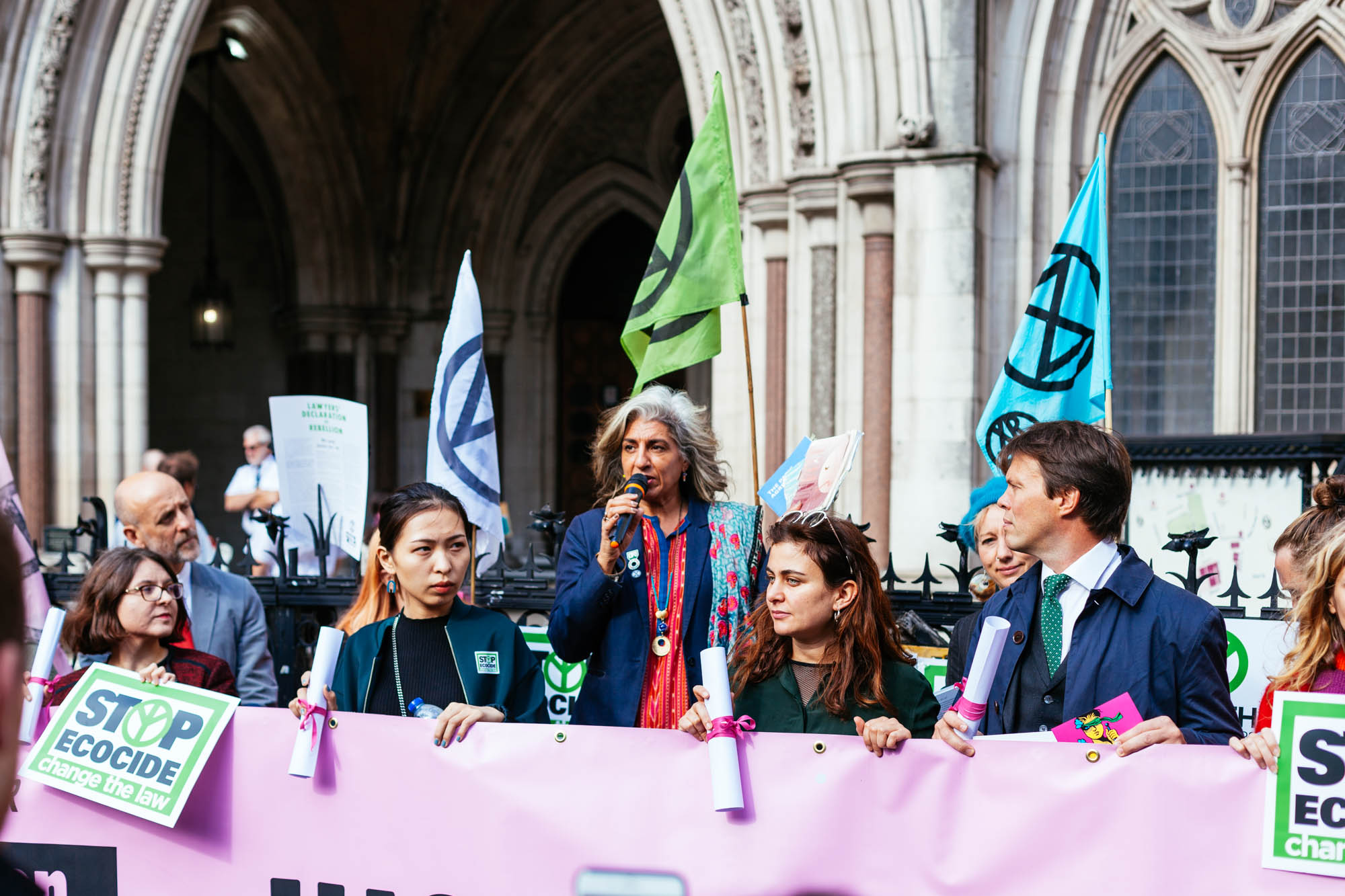 When she met Higgins in 2014 they really clicked and Mehta was inspired by the “elegant simplicity” of her idea. She is now working with criminal lawyers, campaigners and diplomats to try to get ecocide formally recognised as a crime at the International Criminal Court.

“We do sometimes encounter resistance from people who are in the legal arena, because your average lawyer is trained to approach the law in a certain way. We get lawyers coming up to us saying ‘you can’t do that because it’s never been done’. But laws change because someone makes those changes.”

Since April, the campaign has really taken off. “We had these crazy two weeks where we redid the website and branding and during that, what turned out to be Polly’s last week, what she was seeing on the internet was actually our messaging getting out properly on the streets for the first time. That was really exciting.”

The organisation has now grown from a handful of volunteers to a campaign team of around 16, an international diplomatic team of seven or eight, and thousands of signed-up members. “When people say how they got involved it was always because they were inspired by a specific conversation, a meeting, the overall purpose of the thing. People feel so passionately about an issue that they want to dedicate their time, energy and activity to that,” says Mehta.

“They’re not necessarily someone that goes out on the streets – Polly wasn’t an activist in the classic boots-on-the-ground sense – but in terms of what she was doing it was fundamentally activist. It aimed to effectively change the world for the better.”

Main image: © John Paul Brown. Updated 15/10/29: It was clarified that Barbosa has been a lawyer for 15 years, not specifically a solicitor.