The emissions from a new Anglo American underground mine project in Chile could be catastrophic for the host nation of the next UN climate talks, DeSmog can reveal. The multinational company has so far avoided scrutiny of the project by hollowing out regional environmental organisations and sharing erroneous information with the scientific community.

“This project poses a risk to Santiago’s fresh water supply and wilderness areas,” Ezio Costa, the Executive Director of Chilean environmental justice NGO FIMA, told DeSmog about Los Bronces Underground (LBU) expansion project. If it goes ahead, “they would be failing to consider the impact on the global climate system, and risking Chile’s commitments for its protection.”

Anglo American submitted its environmental impact study in July 2019 for the US$3billion project, just 52km from where Chile is preparing to welcome the world to the next annual UN climate talks, known as COP25, in Santiago this December.

Like DeSmog’s investigations? Please support us by becoming a patron today!

Anglo American, a London Stock Exchange listed company, has tunnelled under a Chilean glacier, with a plan to excavate copper and approximately 166 million tonnes of raw material from beneath the Yerba Loca Nature sanctuary. This is equivalent to the volume of 127 Costanera Centre towers – South America’s tallest building, which sits at 300 metres and is located in Santiago. It then plans to backfill the entire mine with approximately 114.9 million tonnes of concrete.

The carbon footprint of the 3.4 million tonnes of cement required will be equivalent to 3.2 percent of the South American nation’s 2016 carbon dioxide equivalent emissions, or the collective carbon dioxide emissions of 20 of the world’s least polluting countries. The number rises to 9.7 percent if Anglo American’s plan to extend the life of the LBU mine from 2036 to 2065 as agreed.

DeSmog analysed Anglo American’s own estimates of how much the company can mine per day over the 14-year lifespan of the mine, with the help of Chilean mining engineers. When approached with the estimates, Anglo American did not dispute the carbon footprint of the cement required, or the total associated carbon dioxide emissions it implies.

Anglo American also plans to build diesel emission chimneys at 3600 metres on the north face of the Paloma mountain. Here, they will ventilate emissions from the 20 tonne diesel lorries that will be working at altitude to remove an average of 32,500 tonnes of copper per day for at least 14 years. Anglo American confirmed by email that these emissions would be ventilated at the tunnel entry/exit point.

The emissions site is only 800 vertical metres below and 2.1 kilometres from the Paloma glacier. Black carbon emissions from combustion have been linked to lowering the albedo of ice sheets and further increasing their melt rate over and above the effect of climate change.

On 9 June 2019, Anglo American’s lead in Chile, Felipe Purcell, was asked by glaciologist Fabrice Lambert about the potential effect of emissions from LBU on glaciers. Purcell replied that the mine exhaust at the tunnel entry/exit point would be horizontal, and because of the distance between the exhaust and the glaciers, they would not be affected.

Santiago-based air pollution scientist and mountaineer Dr Zoë Fleming has serious concerns about the plans. “The turbulence caused by the mountain and local atmospheric effects would often lead to the air rising upwards, clinging to the side of the mountain,” she told DeSmog.  The air from the mine exhaust “despite being the other side of the mountain, is highly likely to pass over and hence deposit particulate matter onto the glacier,” she added.

Fleming confirmed that warm underground air is likely to rise, regardless of Purcell’s suggestion that horizontal exhaust orientation would continue to affect the behaviour of underground air once it is released in a mountain environment. She also raised concerns that Anglo American’s nearest station for measuring particulate matter is 21 kilometres from the tunnel exit in Farellones – 10 times the distance particulate matter would have to travel to reach the Paloma glacier. “There seems to be no plans to take in situ measurements of the pollution at the [tunnel] exit,” she says of the project’s environmental impact study.

When DeSmog asked Anglo American about Purcell’s statement, the company initially denied any use of chimneys with surface ventilation at LBU, then retracted the statement once DeSmog referenced explicit mention of them in Anglo American’s own environmental impact study.  “The terms that are used in an environmental impact study are important,” Chilean independent mining engineer Tomás Briones told DeSmog. “A chimney is vertical.”

To gain the necessary social licence for the LBU project, Anglo American has developed a network of payments to civil groups and conservation organisations in exchange for knowledge of their operations, finances and objectives.

One such group is Outlife, a private company which develops and manages mountain recreational spaces including Yerba Loca Nature Sanctuary. “Honestly that’s the first time I’ve heard about it,” Josefina Hudson from Outlife told DeSmog about LBU’s proposal to backfill the mine with concrete beneath the Yerba Loca Nature Sanctuary that she is responsible for managing. When asked about the funding Outlife receive from Anglo American, Hudson replied “I’ve got orders not to talk about that,” adding, “it’s not authorised by the landowner.”

The Yerba Loca Nature Sanctuary falls within the district boundary of the Lo Barnechea municipality. Local Mayor Felipe Guevara of Lo Barnechea has received US$4.1 million in municipal donations from Anglo American during his 10-year tenure, according to a freedom of information request seen by DeSmog. Guevara’s press team stated that they have not received funds from Anglo American since 2016, and that Anglo American had been the principal sponsors of direct payments to Outlife for recent remodelling of the Yerba Loca wilderness area. 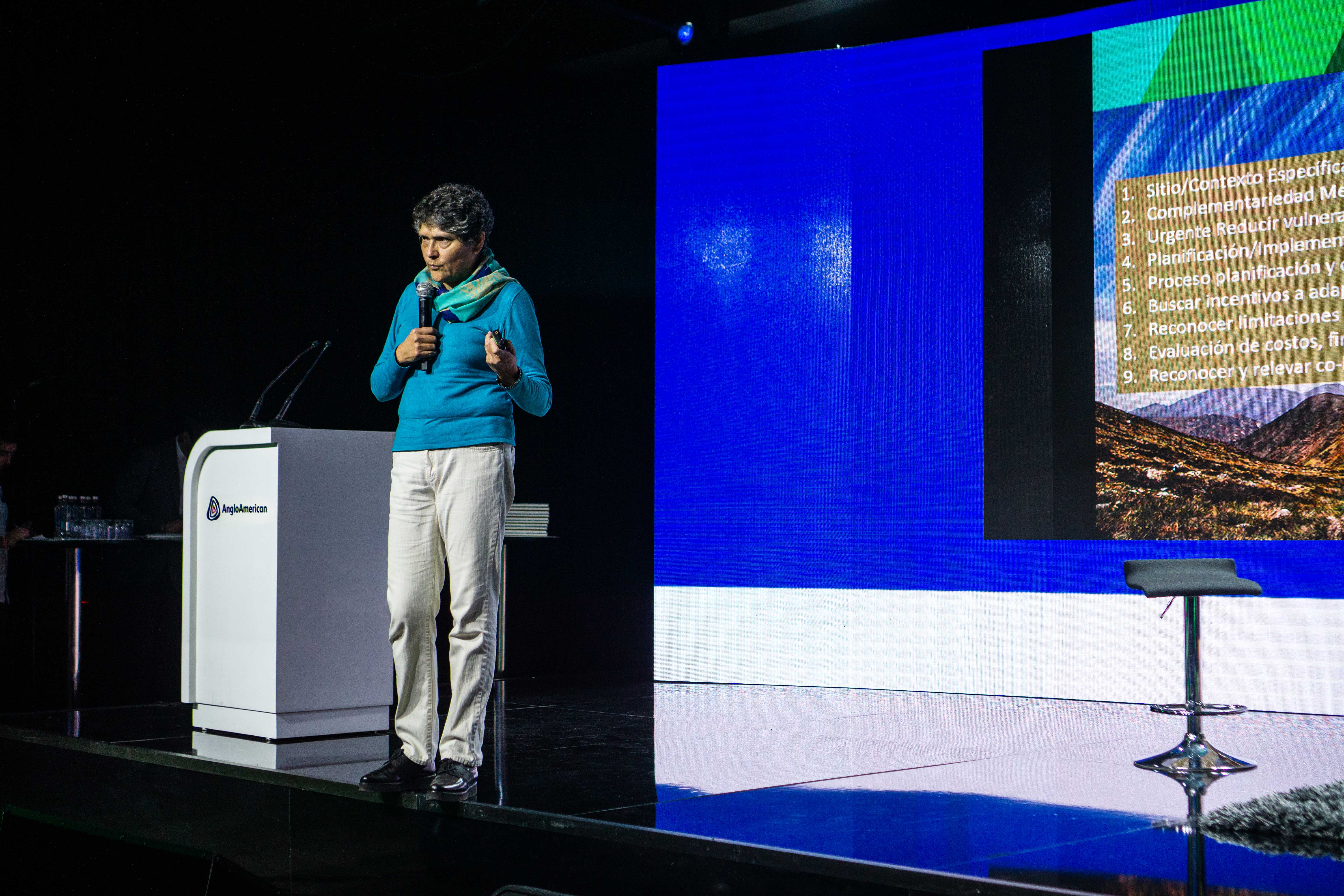 On 21 June 2019, the depth of Anglo American’s relationship with Chile’s environmental guardians was brought into sharp focus.  The multinational company hired the Santiago Inter-Continental hotel’s largest conference salon for their Mountain Conservation Seminar, directly across the road from their 47th-floor office in the iconic Titanium building.

On a stadium-sized screen, the mining company projected condor-eye view landscapes of ice-fields and mountain tops with an earth-shattering sound system to an invitation only crowd. Speakers that day included representatives of Parque Cordillera, a non-profit association working to protect and conserve the mountains of the Metropolitan region; Fundacion +1000, a public-private organisation promoting the value of mountain landscapes; and the Chilean branch of the US-based Wildlife Conservation Society (WCS).

Together, the groups have the potential to significantly impact the management of Andean mountains, resources and citizen experiences. Now, however, these environmental groups have been compromised due to a funding arrangement that sees them reporting to Anglo American. At the seminar, Wildlife Conservation Society Chile Director, Barbara Saavedra, presented a slide detailing the biggest environmental threats caused by Chilean economic activity. Mining wasn’t on the list.

Anglo American confirmed that organisations such as Fundación +1000, WCS Chile and Outlife must share both general and specific project objectives with the company as well as their results, timelines, activities and associated budgets in order to receive funding. Anglo American also reserves the right to audit them to “verify that monies are invested in accordance with the (unspecified) agreement” it reaches with the environmental groups.

WCS’ Executive VP John Gwilym Robinson in New York confirmed with DeSmog that he was aware of the Chilean monetary relationship with Anglo American, stating “there is a formal contract between Anglo American and WCS to deliver on their projects.” He claimed WCS does not receive donations and that funding is in exchange for mitigation consultancy. “We play with a lot of bad actors out there,” he said of WCS’s mitigation services, adding “Anglo American is in the business of tearing up the world.”

Robinson, however, could not provide any evidence of services rendered by WCS Chile to the mining company. Robinson was also unaware of the details of the environmental impact study for the US$3 billion project or even of it being filed. When Desmog shared analysis of the document with Robinson, he doubted if WCS had the capacity to assess the project’s environmental impact despite claiming that WCS was receiving funds to measure and mitigate Anglo American’s activities.

When asked if the Anglo American LBU project on the outskirts of the next city to host the annual UN climate talks was compatible with climate action, environment minister Schmidt – who will be COP25 president – replied: “There’s not a single country in the world that has solved its environmental issues.”

Schmidt also suggested that environmental impact studies are legally robust enough to ensure that each project is appropriately vetted. On 19 September 2019 Schmidt’s statement was made to look over-confident. Recordings of internal discussions at multinational mining company Barrick Gold, reported by Chilean news site El Desconcierto, revealed executives acknowledging they were unable to meet requirements of the environmental impact study they had filed for their Pascua Lama open-pit gold mining project, adversely impacting glaciers in the Atacama.

Publicly available information from over the last year shows Purcell and other Anglo American employees lobbying key LBU playmakers from the Ministries of Social Development, Mining and Geology, regional directors of water services, faming and livestock services, as well as Lo Barnechea Mayor Guevara and Schmidt.

Chile is preparing to hugely ramp up its climate ambition: The country has outlined its intention to reduce emission to net zero across all sectors by 2050.

The Anglo American project could jeopardise that goal. “The Environmental Evaluation Service has not adequately addressed the emissions of greenhouse gases,” FIMA Director Costa told DeSmog. Given Chile’s role of host to the next UN climate talks, and its expected update to the Paris Climate Agreement of reaching net-zero emissions, “a project like this, at this moment in time, unequivocally needs to be evaluated under this logic,” he said.