Activists from theatrical protest group BP or not BP occupied the British Museum overnight in protest of the fossil fuel company’s sponsorship.

The protest titled ‘BP Must Fall’ began the day before, when activists dressed as warriors with BP’s logo emblazoned on shields, snuck a giant wooden trojan horse through the museum gates and parked it in front of the main entrance.

The theme for the protest was taken from the museum’s current exhibition Troy: Myth and Reality, which is sponsored by BP. Two activists then braved the cold and rain staying overnight in the horse to stop it being removed.

Hundreds of people took part in numerous protests around the British Museum all afternoon on Saturday 8 February, from creating origami paper swans with messages of protest written on them to learning anti-BP song lyrics. The organisers reported to have 1,500 people involved across all the actions.

BP or Not BP’s protest grew to a crescendo when the main hall was filled with hundreds of people all singing “It’s time to take it down, to tear away that logo, this horse is not a gift, it only leads to sorrow, BP must fall, BP must fall”. Organisers had earlier distributed lyric sheets and paper with the BP logo on. In unison, all the protestors raised the paper logo above their heads and symbolically ripped it in half. 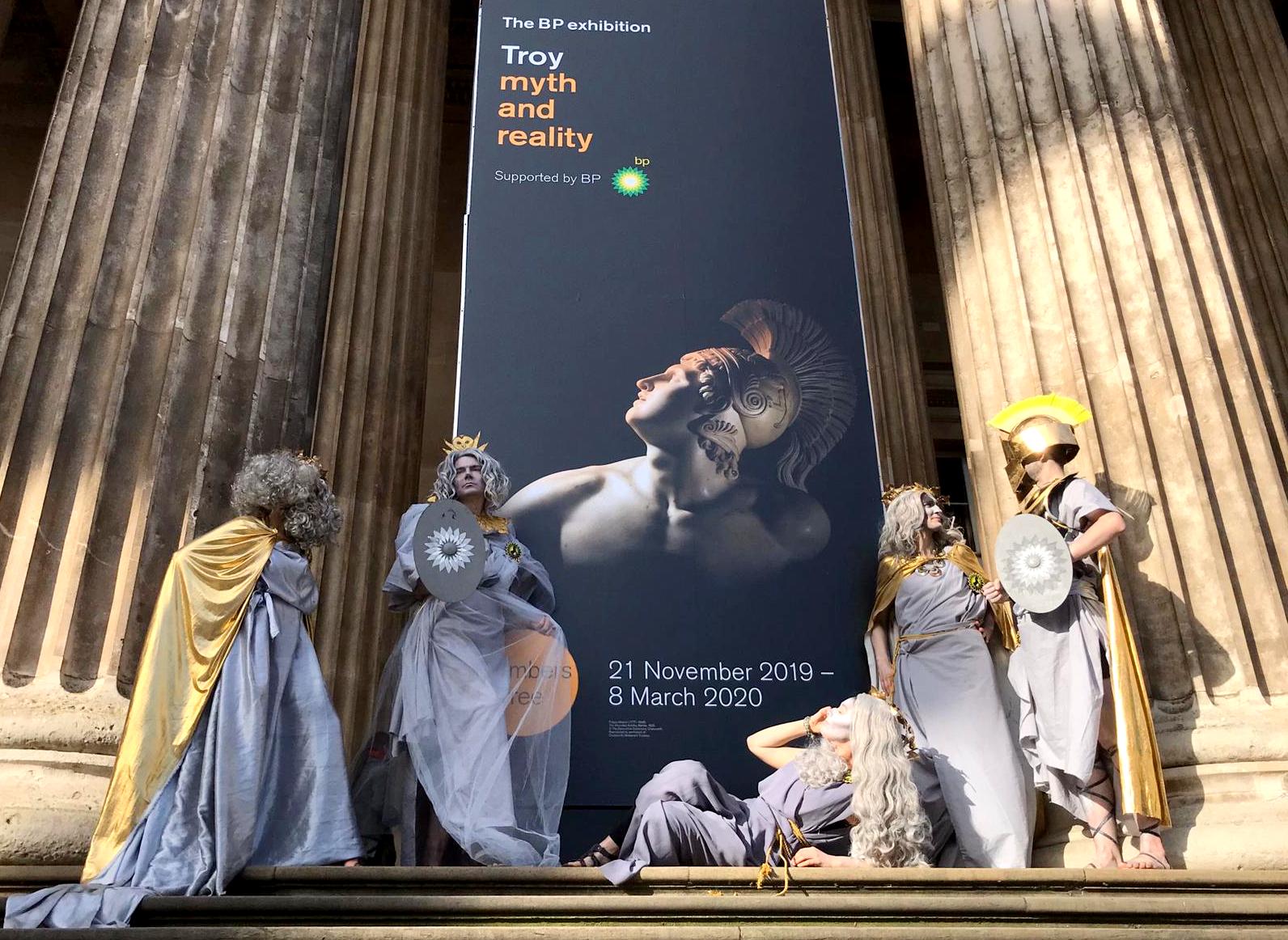 BP or not BP said in a statement they want the British Museum to follow in the footsteps of Tate, the Royal Shakespeare Company, the National Theatre and others that are, “no longer giving legitimacy to fossil fuel companies” through corporate sponsorship of their exhibitions.

Other affiliated groups including the Red Rebels and Youth Strike 4 Climate were also involved in the action. The Red Rebel’s drew the attention of visitors as a group dressed in long, flowing black costumes and painted faces solemnly walked in single file around the museum.

After BP or Not BP‘s main action had taken place, a smaller group of about 40 activists occupied the museum overnight.

Speaking from inside the overnight occupation of the museum, activist Saartje Verhaeghe told DeSmog, “it’s unbelievable that our major cultural institutions are still partnering with, and giving legitimacy, to oil companies such as BP.”

“I’m here because creating this artwork overnight is a bold escalation in our campaign, a way of reclaiming the space and forcing the museum to decide whose side it’s on.”

Organisation for the protest began in August 2019, with 1,500 people signing up to take part. The protest included activists and members of the public who decided to show support on the day, as well as fee-paying British Museum members.

Theatrical activist Kierra Box, 34, who was involved in safe-guarding the wooden trojan horse throughout the action told DeSmog, “we are protesting because the British Museum is one of the only arts venues that still feels it needs to be propped up by a fossil-fuel company in order to give people access to art and culture.”

She said the protest aims to highlight the hypocrisy of the British Museum taking sponsorship from BP, “who are trashing our climate and trashing our environment and making sure generations to come won’t be able to enjoy history and culture because they’ll be too busy dealing with a climate emergency.” 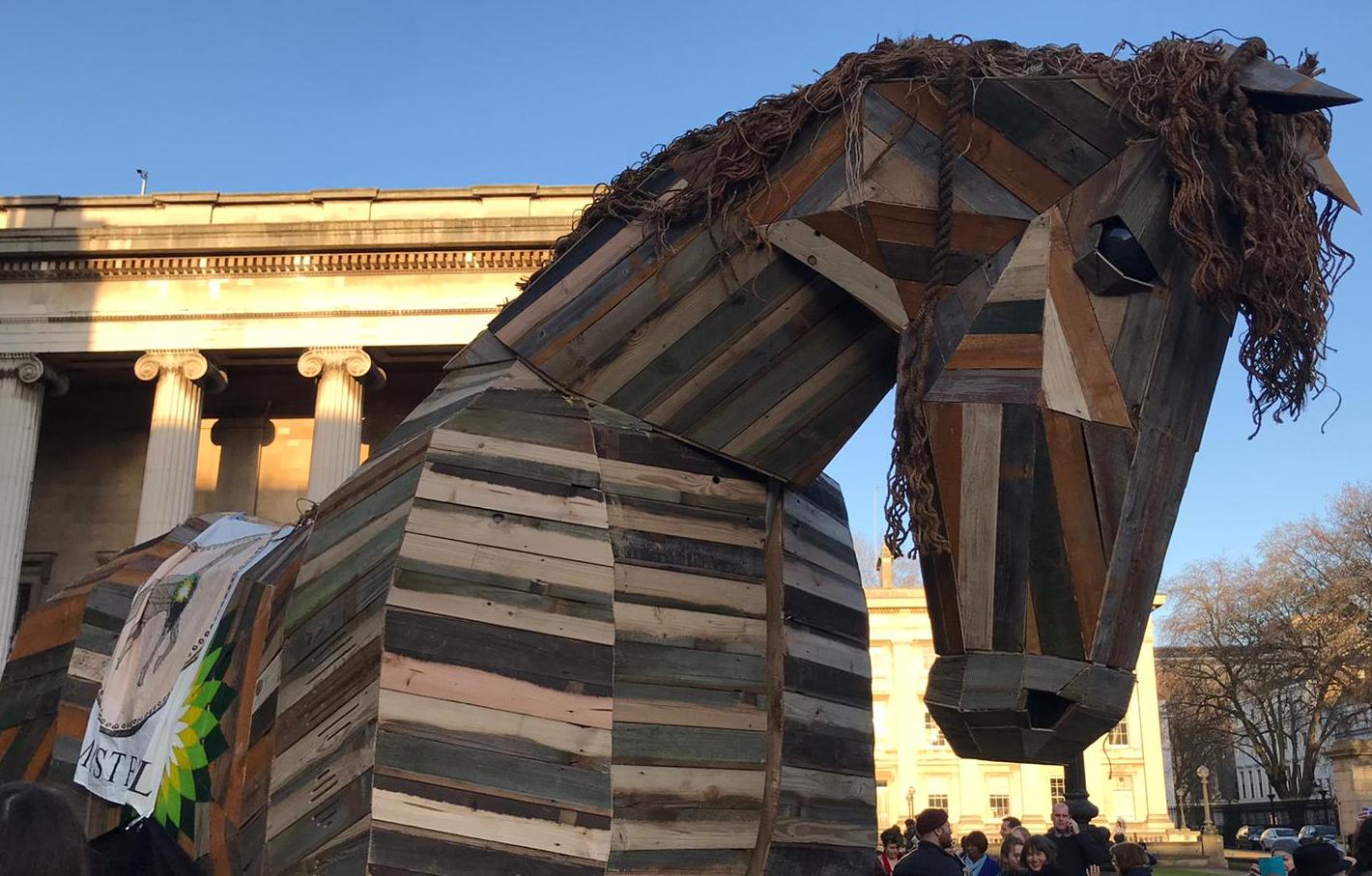 Hartwig Fischer, Director of the British Museum, dismissed the calls for the museum’s partnership with BP to end, saying in a statement: “The museum is a public space where people can come to debate and we respect other people’s right to express their views.”

“We share the concerns for the challenges that we all face together as a result of climate change. We address these issues in an innovative way through significant exhibitions and public programming.”

“The British Museum offers for millions of people an extraordinary opportunity to engage with the cultures and histories of humankind. Without external support and sponsorship this would not be possible.”

“Removing this opportunity from the public is not a contribution to solving the climate crisis.”

This article was updated on February 14.