It’s 5pm on a dismal Monday and commuters are scurrying past Parliament on their way home. In the fast-fading light it’s easy to miss a solitary teenager perched on a wet ledge and holding up a cardboard sign.

This is the ninth day that 14-year-old Lissy Green has deprived herself of food. The schoolgirl from Ascot, Berkshire, is one of a clutch of young activists opposing plans for a deep coal mine in West Cumbria – the UK’s first in 30 years.

Work on Woodhouse Colliery, near the small town of Whitehaven, was due to start in the coming months after planning permission was ratified in October.

Once operational in 2023, it would extract 2.8 million tonnes of coking coal from both onshore and offshore seams every year for 50 years, producing the equivalent of 420 million tonnes carbon dioxide – just slightly less than the 460 million tonnes produced by the whole of the UK every year.

“I feel emotional about it, but more angry than upset,” Lissy told DeSmog. “There’s a heavy, heavy, demand for action and the government are still not doing anything.”

Referring to the Government’s recent pledge for zero carbon emissions by 2050, she added: “They’re not meeting their own target, that’s the really annoying thing. They’ve set this emissions target and that’s not good enough, but they’re not even planning on sticking to that – this coal mine is going to last 50 years.”

While the UK’s coal-fired power stations are being phased out by 2025, coking coal for steel manufacture is still open for business.

West Cumbria Mining does its best to distance itself from coal’s dirty reputation, claiming it is planning for a “21st century mine”, whose steel will provide for a growing domestic renewables market. The company also says that by using coal produced in the UK, they are actually saving on carbon emissions that would otherwise come from importing coal from abroad.

Lissy, who has fought fatigue and nausea to travel daily to Westminster after school, is dismissive of these pledges.

“It’s total green-washing. You see it with every big company at the minute, with the oil companies and all their campaigns,” she said. “This coal mine is going to mean cheap and easy access to coal in the UK, which is going to be such a huge step backwards for us.”

The issue is complicated by the promised creation of more than 500 jobs in the ex-mining community. At the time of the decision, Geoff Cook of Cumbrian County Council argued that “the need for coking coal, the number of jobs on offer, and the chance to remove contamination, outweighed concerns about climate change and local amenity.”

But a report on the mine by nonpartisan think tank Green Alliance suggests ex-industrial areas such as Whitehaven could also be regenerated through shifting to a low carbon economy. The authors cite a 2019 study by IPPR North which estimates that up to 46,000 jobs could be created in the north of England in the power sector alone.

“Even though the job-creation is a local success story, it will have global implications,” says Lissy. “I feel so passionately that people in these areas should have new jobs, they just shouldn’t be created through this industry. The green industry will need to create new work.” 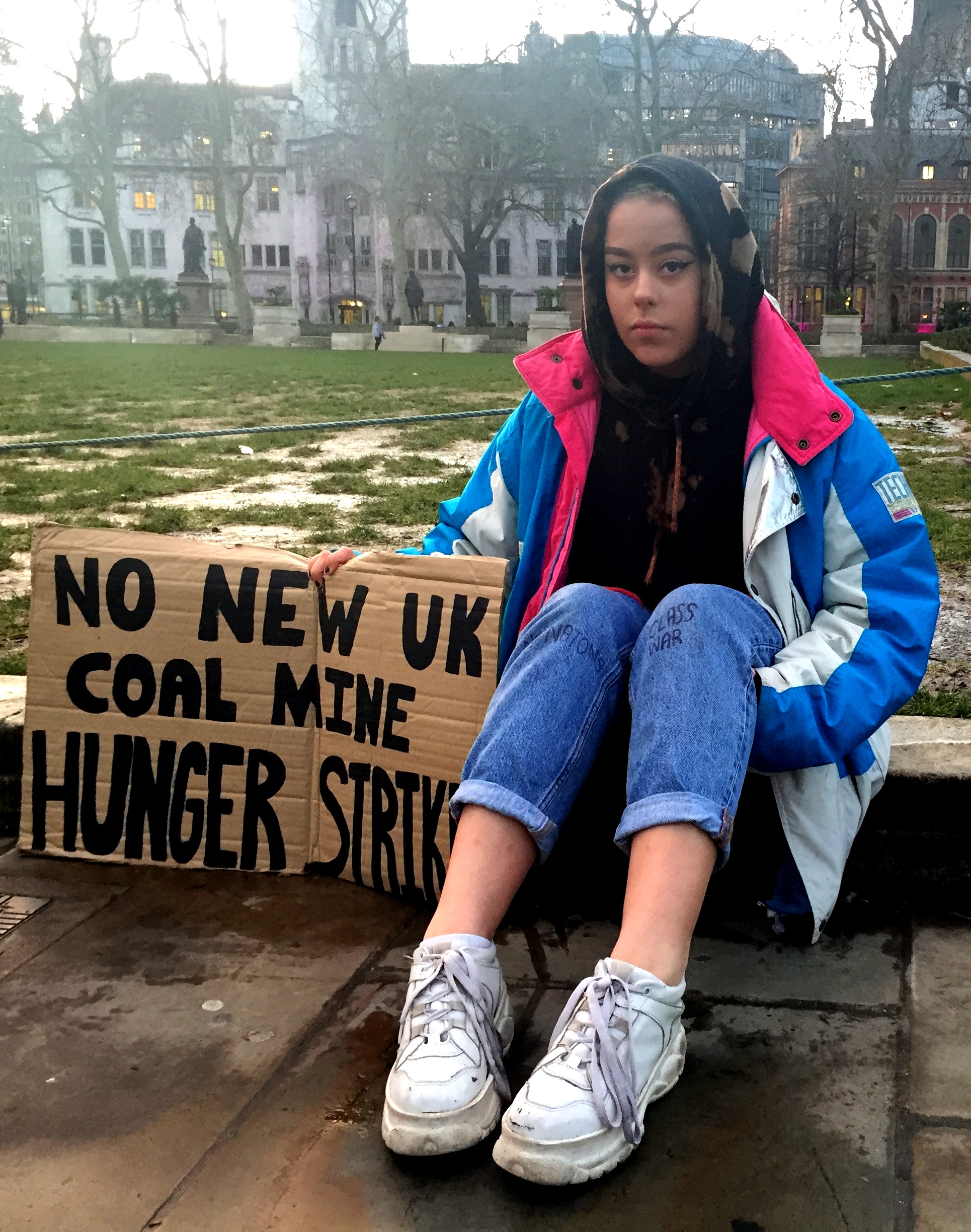 Like thousands of teenagers, joining Greta Thunberg’s school strikes movement has triggered a transformation in Lissy’s life. In the nine months since her first climate march, she has blocked Westminster Bridge with Extinction Rebellion and been arrested three times.

She found out about the mine through Instagram, after 16-year-old Elijah McKenzie-Jackson posted about his action online. Elijah has now completed a ten-day hunger strike, while Lissy was on her final day when we spoke. Both received regular medical check-ups throughout, but Lissy admits her final days were a struggle.

“I’m feeling really faint, but more than that, ill,” she said. “You kind of just feel dizzy all the time. At school it’s been difficult to concentrate. I’ve been quite out of it. When people are speaking to me I felt not quite there.”

The students stand firmly behind local campaign group Keep Cumbrian Coal in the Hole (KCCH), which last week won permission for a judge to review the planning decision. The case will be scrutinised at Manchester’s High Court later this year, on a date yet to be set.

Lissy and Elijah’s protest outside the House of Commons also caught the attention of several politicians. Liberal Democrat MP Tim Farron, who represents Westmorland and Lonsdale in South Cumbria, and Alex Sobel, Labour Co-op MP for Leeds North West, both met with the pair and promised to support the cause.

But Lissy is concerned that the power lies not in their hands, but in those of Secretary of State, Robert Jenrick – who has so far chosen not to intervene in the decision.

“Our meetings with MPs were positive and there are some things they can do”, she said. “They said they’d vote against it in Parliament, but they haven’t given us concrete promises. That’s why I wanted to keep on striking, to make sure something gets done.”

The Department of Housing, Communities and Local Government did not respond to a request for comment.

KCCH told DeSmog it was impressed by the teenagers’ dedication, but urged them to prioritise their health.

Group member Marianne Birkby said: “Young people should not have to go on hunger strike to stop this coal mine. Our message to young folk who feel legitimate outrage and despair is that we can all work together to ensure that the first deep mine in the UK in decades is most definitely not a done deal.”

She urged fellow campaigners to join them in lobbying the Marine Management Organisation (MMO), which is yet to issue a licence to the developers to mine for coal under the Irish Sea.

The group also wants to highlight the proximity of the proposed mine to Sellafield, home to 80 per cent of the UK’s nuclear waste. “There is only one thing worse than opening up the first deep coal mine in the UK in 30 years and that is opening up a coal mine near the world’s riskiest nuclear waste site,” she said.

Back on a damp London pavement Lissy is joined by fellow activist, 15-year-old Inky Campling, who has arrived to take her place. Despite the considerable health risks, they aim to continue the hunger strike chain for as long as possible.

“The longer we do it, the more attention it will get,” said Inky, who has just finished school in North London. “Already this has got so much attention on social media, people have been asking me about it at school, getting outraged when they find out about it and writing to their MPs.”

Lissy added: “Carrying this on is going to ensure it’s not an empty promise. We want it to stop before any of the digging actually starts happening – we’re at a crucial point to take action.”

Anti-science rhetoric and special interests have pushed us to the edge of climate chaos. But just as quantum physics disrupted our view of matter and energy, quantum social change disrupts our beliefs about what’s possible, how fast, and by whom.
us/Climate Protesters Delay Congressional Baseball Game
ByZach Roberts