GLASGOW, SCOTLAND — A Spanish energy giant has been criticised for touting its green credentials at COP26 with free solar-powered WiFi booths and a “cycling expedition”, while remaining involved in multiple gas power projects in Mexico.

Iberdrola helps run an annual cycle ride to UN climate summits backed by the International Energy Agency, which recently called for an end to new fossil fuel developments if the Paris Agreement goals are to be met.

Spain’s largest utility company, whose biggest shareholder is Gulf petrostate Qatar, is a partner of “Moving for Climate NOW”, which organised an electric bicycle ride from Edinburgh that arrived in Glasgow on Tuesday after visiting renewable energy sites along the way.

Alongside executives from Iberdrola and its subsidiary ScottishPower – a COP26 “principal partner” – the event organising team includes figures from the UNFCCC, the Scottish government, the International Energy Agency and WWF.

Despite closing its coal plants in 2017 and promising to decarbonise its power supply, Iberdrola has built two gas-fired power stations in Mexico since 2019 and has been pushing to open two more, although an Iberdrola spokesperson said it did not expect these to proceed due to opposition from the Mexican government.

Iberdrola decommissioned the last of its coal-fired power stations in 2017 and has since pledged to become carbon neutral in Europe by 2030, and globally by 2050.

Last year, it announced it would invest 75 billion euros ($88 billion) in renewable energy by 2025 to meet the growing demand for clean power.

But the company has recently completed two new gas plants in Mexico and planned for an additional two, based on a 25-year contract, according to its website.

And a recent investigation by The Ferret found Iberdrola to be the most polluting COP26 sponsor, having contributed over 70 million tonnes of emissions last year.

The UK’s COP26 unit told DeSmog that all its sponsors “have met the robust sponsorship criteria” based on having net zero targets and credible plans to hit them, independently checked by the Science Based Targets initiative, a global scheme working with businesses to set strong emissions targets. 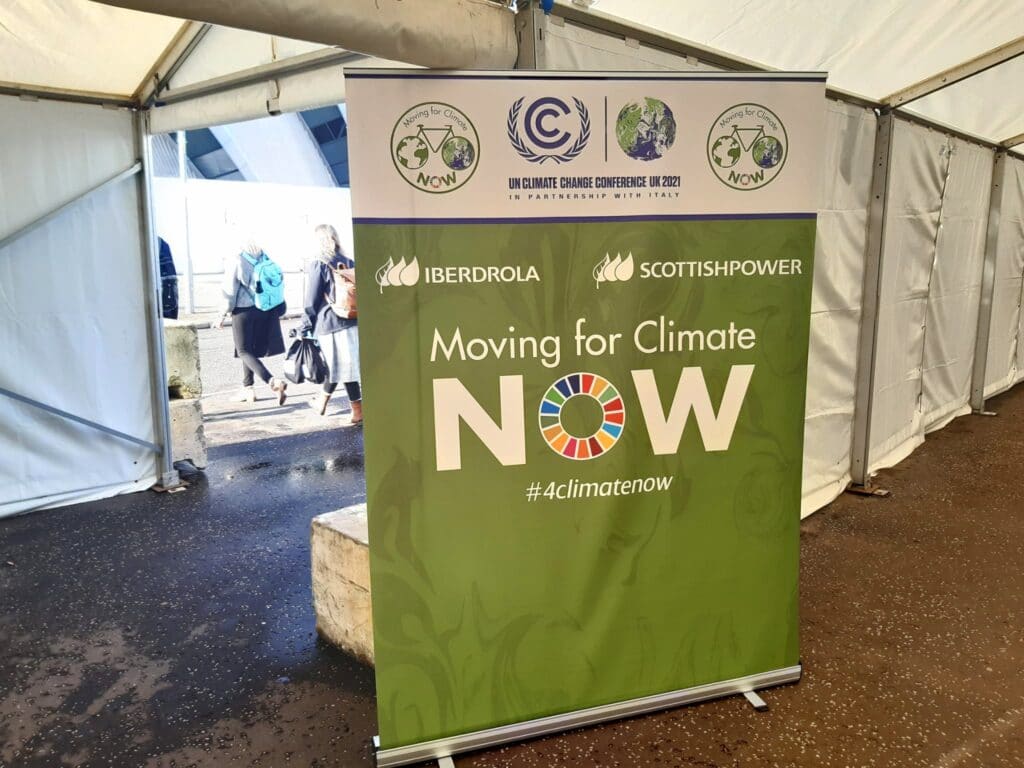 ‘Taking Us For a Ride’

The Iberdrola and ScottishPower WiFi phone booths, which attendees pass in the central passage through the official Blue Zone, stand alongside a poster inviting visitors to “stop, power up and recharge your batteries”.

ScottishPower, which also has a stall in the summit’s Green Zone for civil society, has promoted the booths on social media and posted a video about Iberdrola CEO Ignacio Galan’s attendance at the summit, explaining that he “has joined leaders from around the globe to boost the fight against climate change and the race to net-zero”.

“They are typical of what companies are trying to use COP26 to do: wrap themselves in the colours of the UNFCCC and pretend to be climate champions when the reality is far, far dirtier.”

He described the bike ride as the “latest in a long line of greenwash gimmicks from Iberdrola. They’re taking us for a ride with their electric bike sponsorship. Before lauding their green credentials and using cheap gimmicks, how about not investing in new fossil fuel plants?”

Daisy Jamieson, a campaigner with Glasgow Calls Out Polluters, said: “It’s disgusting that big polluters are so blatantly able to advertise themselves in the climate conference and make it out that they are part of the solution, while simultaneously trying to open four gas plants across Mexico in the past couple of years.”

“Using electric bicycles to transport ‘experts’ to deliver a message on climate change to COP is an outrageous exercise in corporate greenwashing and misdirection when Iberdrola are themselves a major contributor to the climate crisis,” she added.

According to investor database Orbis, Iberdrola’s largest single shareholder with a nearly nine percent stake is the Qatar Investment Authority, the sovereign wealth fund of Qatar, one of the world’s top producers of fossil gas.

The Qatar Investment Authority also has a 20 percent stake in the UK’s Heathrow Airport, which was found to be the world’s second most polluting airport in a recent report and is looking to build a third runway.

A COP26 spokesperson defended the decision to partner with Iberdrola, saying: “The UK government is working with corporate sponsors to increase value for money for taxpayers, and reduce the overall financial cost of COP26.

“As part of this, all our sponsors have met the robust sponsorship criteria, which includes making net-zero commitments with a credible action plan to achieve this, independently verified through the science-based targets initiative.”

An Iberdrola spokesperson rejected the criticism from campaigners, telling DeSmog: “Iberdrola is helping Mexico to transition away from fossil fuels by using natural gas to generate electricity instead of fuel-oil.”

He confirmed the two existing plants and said plans to open two others were “delayed and paralysed” by the current Mexican government, and that this means the company no longer expects to build them.

“We have not commissioned any new projects in Mexico in the last two years due to tension in the market. We have existing combined cycle [gas] plants operating in Mexico”, he said.

He rejected the charge of “greenwashing”, arguing that the company was 100 percent green in the UK and noting the company’s carbon neutral goals.

“We have to understand natural gas will still play a transition role in the energy transition in certain countries such as Mexico”, he said. “But that doesn’t mean that Iberdrola’s commitment to decarbonise our entire fleet will falter.”

ScottishPower and the UNFCCC did not respond to a request for comment.

By Adam Barnett and Phoebe Cooke