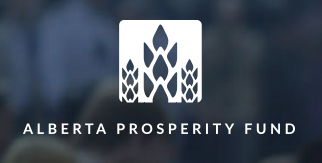 The Alberta Prosperity Fund (APF) is a Canadian non-profit corporation launched in November 2015. APF describes itself as the “the conservative response to left leaning coalitions and governments whose anti-industry pro-government policies are destroying Alberta’s advantage.” The group contends that  “governments and special interests pursue high tax, anti-business agendas, Albertans and the industries that employ them need a champion that will stand strong against efforts that threaten our democracy, economy and undermine the struggling middle class.” [1]

“The Alberta Prosperity Fund can’t give money directly to political Parties, candidates or campaigns,” APF wrote on its Facebook page (note that this text appears to have been since removed), “but we can direct unlimited resources to specific ridings to run ads, mail letters, make phone calls, identify voters and even encourage them to take action on specific issues.” [1]

The APF‘s initial vision statement (since revised) stated that their vision was to “We create meaningful relationships with our donors and Alberta voters to unify the common sense vote, fight government’s use of power and ensure that the core values of liberty and prosperity are reflected in Alberta’s public policies and the regulations that result from them.” [Emphasis added. Note that as a non-profit corporation, APF does not need to reveal who those donors are.] [2]

APF is run by Barry McNamar, who has ties to both the Fraser Institute and the Frontier Center for Public Policy (FCPP). The latter has received over $1 million from Koch foundations, as well as money from ExxonMobil and other conservative causes, while the FCPP‘s funding is less transparent. Nearly all of the APF‘s board has deep ties to the energy industry, and includes members who have worked to approve the Northern Gateway Pipeline. [3]

McNamar is also the founding Director of the School of Public Policy (SPP) at University of Calgary a group that has been described as having “heavy” influence from corporations, particularly Imperial Oil. Jack Mintz, head of SPP, is also an Imperial Oil director, and director of the Imperial Oil Foundation. [4]

While U.S. Super PACs have a clear legal definition, making them subject to more controls, in Canada “Outside legally defined election campaigns, there are essentially no controls on the advocacy activities of groups like the APF.” [5]

According to their website, the APF plans to “Identify and mobilize grassroots Albertans to enact legislation and elect candidates that support our sponsors’ vision” as well as conduct polling and “continuous dialogue” with Alberta voters. [6]

Wildrose leader Brian Jean told the Calgary Herald that “Wildrose is not involved in the ‘Alberta Prosperity Fund.’” He said in a statement that “We have had our lawyer send them a letter requesting that they stop telling people they have our endorsement or support.” McNamar, who has served as a fundraiser for the Wildrose part in the past, denied that the Fund had ever claimed affiliation with the party. [7]

The Rise of Canadian Super-PACs

The Alberta Prosperity Fund has described itself as “Canada’s only conservative Super PAC.” News sources have commented that these so-called Canadian “Super PAC‘s” lack the same controls as their U.S. Counterparts. [5]

Working as  a non-profit without charitable status means that APF faces little scrutiny in its actions or finances, contrary to what political parties face. Canadian PACs like APF have already been criticized for allowing third parties to influence the political conversation, the Huffington Post reports. [8], [9]

The Globe and Mail, pointing to HarperPAC and Engage Canada as examples, argued “At a minimum, enhanced rules on timely disclosure of donors to third parties are necessary, so voters will know who is trying to persuade them.” [10]

The Alberta Prosperity Fund has worked to generate a social media presence. As of December, 2016, their Facebook page had over 9,000 likes, and regularly featured posts disparaging Alberta’s NDP government, opposing the Carbon Tax, and dismissing the NDP‘s proposed climate change program. For example, in a post from July 10: 11]

“The speNDP is also spending roughly $5 MILLION to sell you their climate change program. Because they know you won’t buy it for free.  Don’t be misled.” [11]

Highlighting a quote by NDP appointee Tim Gray, who had said “we will continue to work to stop risky pipelines like Energy East, Northern Gateway and Kinder Morgan […],” The Alberta Prosperity Fund told their Facebook supporters “Let’s get these guys gone Alberta.” [12]

As non-profit organization without charitable status, APF is able to operate with virtually no restriction on how it raises its money, and isn’t required to reveal its donors to the public. They don’t have obligation to report how much money they spend, or where they spend it. [5]

The Alberta Prosperity Fund lists the following “Executive Committee” members, many of which have long-time ties to the oil, gas and energy industry: [3]

Heather Forsyth is a former MLA for PC Alberta in Calgary-Fish Creek. She joined the Wildrose Party in 2010, and was elected Interim Leader in 2014, retiring from politics in 2015.

James McCormick is the Vice President for Land at Venturion Oil, and has worked in the oil and gas industry since 1979. He has served as the President of the PC Association of Alberta.

Dale. W. Bossert  is president of DWB Oilfield Consulting and worked as an oil and gas industry executive for more than 45 years. He has been a Director of Gasfrac Energy Services Ltd.,  Forbes Energy Services LLC, and has held executive positions with numerous other US and Canadian energy companies. Bossert served as Campaign Manager for The Hon. Jason Kenney MP for the four federal elections prior to 2015.

Larry Kaumeyer is the CEO of Buffalo Inspection Services, a group servicing the energy industry in BC, Saskatchewan, and Alberta. He was previously CEO of Infracon Energy Services Corporation, and before that Vice President of Aecon Group Inc. He was CEO of Almita Piling, and founding Chair of Productivity Alberta.

Shiraz Shariff is the Executive Vice President at Catch Resources Inc., a group “focusing on the acquisition of producing and distressed assets within the oil and gas industry.” Shariff as well as President of Alberta Business Connections Ltd.  [13]

Michael Yurkovich is the President and a Director of Refraction Asset Management Ltd., “a boutique asset management firm focused primarily on energy investments.” He has previously served as an analyst- E & P for Canaccord Genuity and a Research Associate at Desjardins Securities.

Barry McNamar  is the President of the Alberta Prosperity Fund. He was a founding Director of the School of Public Policy (SPP) at University of Calgary ( and has held leadership positions with the Manning Foundation, Fraser Institute, Canadian Alliance Fund and Reform Fund Canada.

Rabble.ca reports that “corporate influence in the SPP is heavy. The connections to one company in particular – Imperial Oil – are extensive.” The school was set up with a $4 million donation from James Palmer, a leading Canadian oil and gas lawyer. Jack Mintz, who headed the SPP, is an Imperial Oil director, and director of the Imperial Oil Foundation. Papers by the SPP have pushed for pipeline growth, worked to discredit green jobs (calling them “illusory”), and downplayed the impacts of energy development. [4]

Randy Kerr, Chief Communications Officer for the Alberta Prosperity Fund, worked as a Manager for Provincial Government Relations for Enbridge where he worked towards the approval of the Northern Gateway Pipeline. Prior to that he worked at ConocoPhillips Canada to create tar sands strategies. He has also worked in politics as a campaigner.

“We want to facilitate this conversation about, for lack of a better term, unity,” Rutherford told a crowd of about 50 people, mostly PCs, who had gathered in Calgary on Tuesday night to discuss bringing together the right wing.

“I am going to go around Alberta in a pickup truck and talk to people and find out what people want to do going forward.”

Cam Davies, a former Wildrose Party event organizer, has been the APF‘s vice-chair. [15]

The Alberta Prosperity Fund (APF) will host a visit by Kellyanne Conway, Campaign Manager and senior advisor to the transition team for US President-elect Donald Trump. Conway will visit Alberta’s Fort McMurray tar sands, and then talk at a private fundraising dinner for APF. [16]

“This visit by such an influential member of a US administration should stand as a call to action for all Alberta industry” said Barry McNamar, Founder and President of Alberta Prosperity Fund, “I hope that Ms. Conway receives an enthusiastic welcome here in Alberta and can return to the US with an informed attitude towards Canadian export products.” [16]

The Alberta Prosperity Fund announced their “unanimous support” in endorsing Jason Kenney of the Progressive Conservative Association of Alberta.  [17]

Jason Kenny, who “leads a crusade against Alberta’s policies tackling climate change,” hired John Weissenberger as his campaign manager. Weissenberger was described as a “global warming critic” by the Globe and Mail, and has said those agreeing with the scientific consensus on climate change are participating in “wacky mass-behavior,” which he further describes as a form of “collective psychosis.” [18], [19]

APF hosted Dr. Frank Atkins of the Frontier Center for Public Policy in a video where he criticizes the Alberta NDP‘s “jobs and economic diversification” plan in the budget 2016. [20]

The Alberta Prosperity Fund launched a speaking tour by former Corus Entertainment talk show host Dave Rutherford. The tour is designed to show that “if Wildrose and the PCs can get their act together and form a single right-of-centre party before the next election, they will defeat the NDP and Rachel Notley – decisively,” reports the Edmonton Sun. [15]

The Alberta Prosperity Fund (APF) launched with the goal of uniting Wildrose and PC conservative voters in Alberta: [7]

“Our goal is to facilitate a conversation between the two conservative parties and try to put the voters in charge, really, and to have the voters encourage a unification of some sort, whether that is a coalition, whether that is going towards one party, whether that is merging into a new party,” said the Fund’s director Barry McNamar, who has been an official with the federal Reform Party, Manning Foundation, and Fraser Institute.

McNamar said that the victory of Rachel Notley’s NDP and its “economic vandalism” was the catalyst for their effort to unite the right. “This vote-splitting cannot stand,” he said. [7]

The Calgary Herald reports that the American anti-tax advocate and president of Americans for Tax Reform, Grover Norquist was to attend a “private information session for donors” at the group’s launch event. McNamar said that the victory of Rachel Notley’s NDP and its “economic vandalism” was the catalyst for their effort to unite the right. “This vote-splitting cannot stand,” he said. [7]