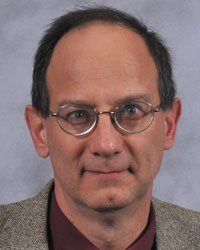 Anthony J. (Tony) Sadar is a professor at Geneva College, a Christian college in Beaver Falls, PA. According to their website, “Geneva is committed to a Christian worldview that acknowledges God’s sovereignty over every area of creation. This includes every field of study, every athletic program and every extracurricular pursuit.” [2]

According to Sadar’s website, he is also a part-time instructor at Penn State’s Beaver campus where he teaches meteorology, climatology, and earth science. He describes himself as a Certified Consulting Meteorologist, while his primary experience appears to be in air pollution meteorology. [3]

Sadar owns a private consulting business, Environmental Science Communication, LLC. and according to one profile he has worked on “a number of power-industry projects related to environmental impacts.”

He has also written articles for the power industry on how to communicate with the public, avoid negative publicity, and to “To achieve success in both the actual and perceived protection of the environment.” [4]

Sadar appears to be a proponent of the theory of intelligent design and teaches a course “ID & Evolution” at Geneva College. He recently published a book titled In Global Warming We Trust which compares mainstream climate science to a medieval religion. [5]

“Everyone has been conditioned to believe that an extremely complex climate system is largely controlled by a single simple gas – carbon dioxide – even though the biggest single climate regulator on Earth is most likely water… . Besides, could other uncontrollable factors like variation in incoming solar radiation and cosmic rays, as some atmospheric scientists have proposed, have a dominant influence over climate? [6]

“New discoveries are revealing the increased superabundance in complexity of life at its basic level. It seems that the living cell more and more can be compared with the most advanced supercomputers, and as such, by analogy, it compels a reasonable consideration that maybe, just maybe, at some time in the very distant past, some thought was given to life’s origin.” [7]

“Global temperatures continue to level off, despite predictions from vaunted computer climate models and strident claims of climate catastrophe within and beyond the college campus.” [8]

“Today’s crisis-mongering climate science is run like a shady business. It soaks the middle class and deprives the world’s poor of a better tomorrow.” [9]

“…the man-made-climate-catastrophe scientists, with enormous financial support from big government and the aid of media and PR promoters, continue to hawk their limited view of the atmosphere.” [10]

Anthony J. Sadar was a signatory to a Cornwall Alliance open letter supporting Scott Pruitt for EPA Administrator under the Trump administration. [13]

Pruitt was further grilled on his fossil fuel ties at his confirmation hearing on January 18. [15]

Sadar published his book, In Global Warming We Trust: A Heretic’s Guide to Climate Science which contends that modern climate science is the result of a religious cult.

According to the book’s description, a “cult of progressive environmentalism” has “swept the globe,” and modern climate science “has been seized by activists who put their political agenda ahead of scientific rigor and objectivity.” [9]

Anthony J Sadar is a signatory to the Cornwall Alliance’s “Evangelical Declaration on Global Warming,” listed under the category of “scientists and medical doctors” who signed. [11]

Those who sign the declaration must deny “that carbon dioxide—essential to all plant growth—is a pollutant. Reducing greenhouse gases cannot achieve significant reductions in future global temperatures, and the costs of the policies would far exceed the benefits.”

The declaration also asserts the following:

“Earth and its ecosystems—created by God’s intelligent design and infinite power and sustained by His faithful providence —are robust, resilient, self-regulating, and self-correcting, admirably suited for human flourishing, and displaying His glory.  Earth’s climate system is no exception. Recent global warming is one of many natural cycles of warming and cooling in geologic history.”

According to a search of Google Scholar, Anthony J Sadar has never published in a peer-reviewed journal on the subject of climate change. He has published some articles on air pollution dispersion, and the aurora borealis.