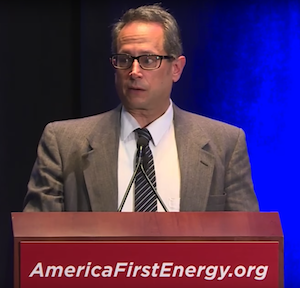 Anthony Lupo is a Professor of Atmospheric Sciences at the University of Missouri-Columbia. He has also been a speaker at the Heartland Institute‘s International Conference on Climate (ICCC).

According to leaked documents Anthony Lupo receives $750 per month from the Heartland Institute.

Lupo agrees that temperatures have been rising over the past thirty years, stating that “anyone who denies this [climate change] isn’t a very good scientist.”

But he has also said that “The Earth goes through phases of warming and cooling, and though all the computer models we have show that we are in a warming phase, there is no way to differentiate between a natural warming and one that is human-caused.” [2]

As an “expert reviewer” [3] of the most recent report from the Intergovernmental Panel on Climate Change, Lupo disputed the report’s consensus that “the balance of evidence suggests a discernible human influence on global climate.” [4]

“’In my mind, I hope that I’m keeping those two things separate,’ he says. ‘But I’m a person like anyone else, and I think I wouldn’t be surprised if my thoughts are a little bit colored. But, you know, I try to keep my science independent of my politics as much as possible’.” [4]

The Independent Institute announced the release of an update to Fred Singer’s book, Hot Talk, Cold Science. “Dr. Singer passed away in April 2020, but not before updating and expanding his much-discussed book with the co-authors, and atmospheric scientist Anthony R. Lupo (University of Missouri) and climatologist David R. Legates (University of Delaware),” the press release noted. [33]

“In the new edition (twice the size of the previous edition) the authors explore the inaccuracies in historical climate data, the limitations on and failures of climate models, solar variability along with the effects of clouds, ocean currents, and sea levels on global climate, plus factors that could mitigate any human impact on world climate.

“‘Over the years and despite all the invectives poured upon him by climate alarmists, Dr. Singer has stood his ground for scientific integrity and adherence to the scientific method. For that, he is to be greatly commended,’ said climatologist David R. Legates.”

Lupo signed the “Realist Catholic Climate Declaration,” drafted by Heartland Institute policy analyst William Briggs, which stated, “the earth’s climate has always changed, is changing now, and will never cease changing. The extent to which man is responsible for climate change is not known, only surmised. There is no earthly force capable of stopping climate change,” and that, “the salvation of souls is of more pressing concern than the air temperature. Pray to God and pray for your neighbor, not to the planet.” [29], [30]

The declaration was endorsed by Anthony Watts’ blog Watts Up With That, in a post by Charles Rotter, which stated, “please share this as widely as possible. With the concept of ‘eco-sins’ being bruited, and the return of paganism, this declaration is timely and important.” [31]

According to a post at William Briggs’s website: “This statement is to be in contradistinction to the hyperbolic and inaccurate ‘U.S. Catholic Climate Declaration’,” Briggs wrote of the draft. “The goal is to have something short, sweet, certain, and Catholic.” [32]

Lupo was a speaker at the Heartland Institute’s “America First Energy Conference” at the Marriott Hotel in Houston, Texas. Lupo’s speech, on the “Climate Science” panel, was titled “Climate, Climate Change, and Climate Modeling”: [28]

The event description read as follows: [22]

“What scientific and economic evidence is there that the plan is putting the nation on the right path for economic growth, environmental protection, or both?” [22]

In a fundraising letter obtained by DeSmog, Fred Palmer had promoted the event as having the goal to “review the scientific and economic evidence that exposes the fraud inherent in the Obama-era regulation regime” while discussing “the overwhelming benefits of fossil fuels to us all.” [23]

As reported at the Houston Chronicle, speakers notably included two Trump Administration officials: Richard W. Westerdale II of the State Department and Vincent DeVito of the Department of Interior. David Bernhardt, deputy secretary of the Interior Department, was also formerly listed as a Heartland conference speaker, but apparently withdrew. [25]

The Climate Investigations Center put up a parody of the America First Energy conference website, complete with profiles on the individual speakers and highlighting their corporate funding and ties to groups such as the Cooler Heads Coalition (CHC). [27]

Anthony Lupo was a signatory to a Cornwall Alliance open letter supporting Scott Pruitt for EPA Administrator under the Trump administration. [19]

Pruitt was further grilled on his fossil fuel ties at his confirmation hearing on January 18. [21]

Anthony Lupo is listed as a “Founding Member” of group named Climate Exit (Clexit) led by climate change denier Christopher Monckton. According to Clexit’s founding statement (PDF), “The world must abandon this suicidal Global Warming crusade. Man does not and cannot control the climate.” [13], [14]

DeSmog reports on how the group grew in the wake of the UK‘s decision to leave the EU. A key member of Clexit’s “60 well-informed science, business and economic leaders” is Hugh Morgan, a former board member of the Reserve Bank of Australia and former CEO of Western Mining Corporation with close ties to Australia’s Liberal party. [15], [16]

“If the Paris climate accord is ratified, or enforced locally by compliant governments, it will strangle the leading economies of the world with pointless carbon taxes and costly climate and energy policies, all with no sound basis in evidence or science […]” [14]

Anthony Lupo was a signatory to a Cornwall Alliance open letter written by Calvin Beisner and addressed to U.S. attorneys general about climate change. [9]

The letter responds to recent investigations by U.S. Attorney General Loretta Lynch and members of Attorneys General United for Clean Power into what ExxonMobil knew about climate change and when, started by a coalition of attorneys general in the US. [10], [11]

Calvin Beisner writes that the attorneys generals’ actions are “a dead giveaway that you’re ignorant about climate science and related climate and energy policy.” [11]

“[U]nlike in the case of tobacco’s health risks, there are innumerable and enormous holes in the case (not for human contribution to global warming but) for manmade global warming dangerous enough to justify spending trillions of dollars reinventing the world’s energy system to mitigate it, particularly when competing use of those trillions might bring far greater benefit,” Beisner addresses the attorneys general. And you, intelligent and learned all, are ignorant of those enormous holes.” [11]

The Cornwall Alliance lists the following signatories to its open letter: [11]

Anthony Lupo was a speaker at the Heartland Institute’s Ninth International Conference on Climate Change (ICCC9) in Las Vegas, Nevada. [8]

Anthony Lupo was a speaker at the Heartland Institute‘s 7th International Conference on Climate Change (ICCC7). [18]

Anthony Lupo was one of fourteen Amici, described as “well-qualified climate scientists,” who claimed that the “EPA‘s endangerment finding is not ‘rational’ and therefore arbitrary and capricious.” [12]

According to the petitioners, representing the Coalition for Responsible Regulation, Inc.:  [12]

“[T]he Earth’s climate is not changing in an unusual or anomalous fashion. The EPA relied on instrumental data that were adjusted to exaggerate the increase in global temperatures.” [12]

According to a description of the book at Amazon, “Chapter 6 investigates and debunks the widespread fears that global warming might cause more extreme weather.”

Sent a letter to the The Kansas City Star in 2005 where he said that while “the climate is warming,” the hot and dry conditions the region was experiencing were “not unprecedented.” [4]

Lupo sent a letter to the St. Louis Post-Dispatch, noting that oceanographer Roger Reville was urging that we study the impacts of global warming before making drastic measures to counter it.  [4]

Don Wuebbles, a professor of atmospheric science at the University of Illinois, pointed out in a rebuttal letter that Reville wasn’t in a position to make “recent statements” on climate change, having died in 1991.

Back in 1998, he wrote a letter to the St. Louis Post-Dispatch that claimed: “There is no scientific consensus whether global warming is a fact and is occurring.”

In another 1998 letter, this one to the Columbia Daily Tribune, he wrote that skeptics outnumbered believers of man-made climate change. Lupo says today that the numbers have shifted, but that in 1998 the statement was “probably true.” But this wasn’t the case, as by 1995, the Intergovernmental Panel on Climate Change had concluded that “the balance of evidence suggests a discernible human influence on global climate.” [4]

Lupo was a signatory to a letter to senator John McCain (R-AZ).

According to the press release, “The signers of the letter point out that sediment and ice core samples show that the arctic has experienced past warming that can not be attributed to greenhouse gas concentrations.” [6]

The following is a sample of Lupo’s publications relating to climate. His full CV is available on his website.