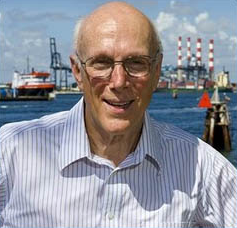 Arthur Middleton Hughes was the founder and Vice President of the Database Marketing Institute, an author at AdamSmithToday.com, and the VP Director of Research and Strategy at the CO2 Capture Corporation. Arthur Hughes passed away in September of 2014. [1], [8]

Hughes taught economics at the University of Maryland for 32 years, and has published 12 books over the course of his career, “most of them on database and e-mail marketing.” [2]

Arthur Hughes is a self-described “Austrian economist who believes in the free market and the role of entrepreneurs in creating progress and wealth,” according to his biography at Adam Smith Today. [2]

According to his LinkedIn Profile, Hughes was “the leader of a group of climate scientists who believes that we need more CO2 in the atmosphere to boost world harvests.” [1]

Hughes asserted that “CO2 is a harmless gas that is essential to plant life and, hence, to all animal life on earth” and that “CO2 does not warm the earth.” Hughes “welcomes all people who disagree with the IPCC which says that global warming is coming.” [1]

Writing at Adam Smith Today in an article titled “Why the Earth is not getting warmer,” Smith declared:

“CO2 is an odorless, invisible, and non-flammable gas. It is also safe for humans in the maximum concentrations recommended for plant growth. The average level of CO2 in the atmosphere is about 390 PPM (parts per million). If the level decreases down below 200 PPM in an enclosed growing area, ps, plant growth rates and flowering will increase 20-100%. CO2 can be used from seedling right through harvest. It may take a hundred years for CO2 to get up to 1500 PPM. During that time, plant growth will flourish.” [3]

Arthur Middleton Hughes, Madhav Khandekar, and Cliff Ollier published a book titled About Face!: Why the World Needs More Carbon Dioxide; The Failed Science of Global Warming. The book’s trio of authors encouraged ramping up CO2 levels, by way of increased fossil fuel use, “to allow more plants to grow and combat rising levels of malnutrition.” [4]

The authors wrote that if the “EPA and IPCC are successful in reducing carbon dioxide in the air, more millions will die annually of starvation—people that could be fed from bigger harvests generated by more carbon dioxide in the atmosphere,” and that, “CO2 is good. We need more of it, not less. DDT is good. We need to use it to eradicate malaria. Energy Independence is impossible and wrong-headed. We should stop subsidizing ethanol, wind power and solar. Coal plants are urgently needed to produce electricity and increase CO2 in the atmosphere. We need to stop programs that are causing millions of deaths worldwide, and spending billions of dollars wastefully at home … There is no global warming caused by CO2, nor are there deaths to wild birds or people due to DDT.” [5]

The central message of the book asserted by Ollier, Khandekar, and Hughes is “people have to be ever vigilant to make sure that doomsayers are not allowed to dictate public policy.” [5]

According to a search of Google Scholar, Arthur Middleton Hughes has not published any climate science research in peer-reviewed journals. [6]