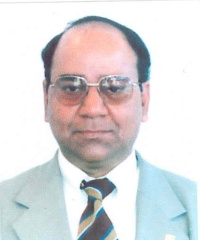 That profile also lists him as ex-chairman and head professor of the Geology Department, and director of the Centre of Advanced Studies in Geology at Panjab University. [2]

Other prior roles listed include visiting scholar of the geology department of the University of Cincinnati, and at ETH, Zurich, Switzerland. He was also “a member of the Outreach Program Committee (OPC), of the International Year of Planet Earth (IYPE) of UNESCO.” [2]

Ahluwalia posted a large paragraph outlining his views on climate change on Facebook: (emphasis and paragraph breaks have been added by DeSmog below): [9]

“Saga of climate change : science, truths and myths: Al Gore called it Global warning ( metaphor for global warming) in his Oscar winning movie but soon it was called by a neutral name Climate change which could be warming and also cooling.

It has been called the greatest threat to the planet Earth. Global cooling and global warming are natural cycles all over the earth history spanning 4600 million years. Man or no man it happened due to so many natural processes and each time lasted long enough first two events created a snow ball earth around 2300 and 700 million years back.

Perceptions about climate change often are hotly debated by politicians and generalizations preferred over science. Contrary to misunderstanding in vogue, we are in an overall ice house age currently which started just about 2.54 million years back.

Even in the small global warming span of about 18000 years when the average Earth temperature has gone up around 6 degrees Celsius and sea levels inspite of going up about 100 metres are lowest ever in the earth history. The sea levels have been much higher during prolonged spells of global warming in Precambrian, Palaeozoic, Mesozoic and Cenozoic. The Meghalian span could prove our biggest undoing if we keep on dumping our wetlands, oceans and atmosphere with rubbish.

During these last 18000 years man saw a long ice age in beginning and then three periods of warming much before he cut out half the natural heritage of forest cover after the industrial revolution. The hotly debated alarm is actually about a currently ongoing mini global warming between two periods of glaciation one gone and one to follow. With solar flares expected to diminish shortly, an extra but very brief mini ice age within this warming is expected too.

The much hyped role of man accelerating the current global warming is not such a gospel truth as it is made out in passionate climate meets very often by the haves pressing the have nots. Rich polluters are often preaching least polluters and bulldozing poor nations whose resources are limited and need to develop fast is almost a “now or never” situation.

Climate of politics and politics of climate change often mask the objectivity of science dividing debate between skeptics and believers. Climate change is science it cannot be a dogma. Be it as it may, man is a reckless polluter of air, destroyer of ozone layer, polluter also of waters inland, under land and also in the oceans and also the soils. The issues if these comprehensive pollution need to be faced without economic oppression or politicization. There is nothing like a good pollution or a bad pollution. Pollution is a sin towards the entire biodiversity especially our own next generation.

Experts say microbes may adjust but man may go extinct very fast. Sea level rise may be adequately faced with help of science and technology and re urbanization may be undertaken with a futuristic vision. But biggest challenge is air pollution in India and China where India is fast overtaking China. Fourteen out of 20 most polluted cities are Indian and our NCR being the most polluted region of the world.

Micro climate change in our cities with the smog engulfing and blackening our lungs is the most emergent havoc in our modern day gas chambers where there are no non smokers left. Rest may be academic and may not happen in our life times which could be as short as a couple of centuries. The mindset changes and life style changes in a knee jerk with huge social, political and educational transformation are the need of the hour. In sum total proportion of our problems climate change may be minor fraction if at all but the real polluted hell warm or cold is before us all.

Duck we may this issue of life and death like ostrich but man being a thinking animal with duty to think of thinking long term and short term. Looking other way is a recipe to extinctions across the planet Earth. Canned pure air is no solution. Much more polluted cities like London, Tokyo, San Francisco repaired their air, why can”nt we. Time to wake up, time to shake up and time to change in a big way.

Climate change has happened and will happen, pollution too has happened naturally in the two biggest volcanisms in Earth history in Siberia at Permian -Triassic boundary in Siberia and later at K-T boundary in India represented by our globally famous Deccan Volcanics. Life nearly disappeared at P-T boundary & later Dinosaurs had to say adieu around 65 million years ago because of volcanic pollution not at all of their making.

But the pollution by man may be petty from Geological history view point though, yet it can be fatal for humans if our lungs, livers, kidneys, joints and skins are already decaying and degenerating due the toxins we are inhaling day in and day out. Infants and oldies will go first but others too shall follow. Choice is tough but has to be made. Now or never are the options. Climate change is always a long term issue but skyline change is not even a short term issue but an existing disaster unforeseen.

Earth was quite beautiful before man and it will be quite beautiful after man. Moment of truth is before us. How long we delay our departure, is the question. We owe it to our next generations and the biodiversity we share the planet with, to learn from geological history: pollution wipes out even dinosaurs who spanned over 155 million years. We just arrived, let us stay a bit”

Accoridng to an abstract of Ahluwalia’s paper, “Climate Change or Global Warming: Man Made or Natural or Both”:

“Man indeed may be a pygmy before nature and incapable of causing or reversing a global warming or climate change. To err on the side of caution let us presume man may be contributing a minor fraction towards warming of the earth. The planet has a great resilience we must not however forget.” [3]

“The IPCC has actually become a closed circuit; it doesn’t listen to others. It doesn’t have open minds… I am really amazed that the Nobel Peace Prize has been given on scientifically incorrect conclusions by people who are not geologists.” [4]

His statement was also republished at Marc Morano’s Climate Depot. [5]

Note that in his original paper, Ahluwalia had written additional context and suggested “to err on the side of caution let us presume man may be contributing a minor fraction towards warming of the earth.” [6]

Ahluwalia presented at the Conference on Climate Change: Shifting Science and Changing Policy in Mumbai, India, hosted by the Liberty Institute. His presentation is titled “Climate Change or Global Warming: Man Made or Natural or Both?” [7]

In 2010 the Liberty Institute partnered with the Heartland Institute to reprint the report of the Non-governmental International Panel on Climate Change (NIPCC) and translate and disseminate it in India. According to the Institute, after releasing this report they have now “undertaken a wider initiative on climate change and economic policy, in partnership with the Friedrich Naumann – Stiftung fur die freiheit. This conference is a part of this initiative.”[10]

They describe the aim of the conference as to “build a movement, a network of scientists, economists, policymakers, elected representatives and concerned citizens who believe in sound science and economic policy options. The goal is to limit the rampant fear mongering, exaggerated claims and media hype, which are casting a shadow on rational assessment of climate and objectively shaping policy, if any, to address the possible impact of changes in climate.” [10]

Additionally, the Liberty Institutes claimed there was a “growing need to reassess the policy options and the economic impact of climate” in the wake of “alternative theories” that have emerged regarding climate change. [10]

“I am really amazed that the Nobel Peace Prize has been given on scientifically incorrect conclusions by people who are not geologists,” Ahluwalia, according to RSN, said. [11]

RealClimate noted “the scientific programme for the session on climate, shows that the ‘climate contrarians’ were quite well represented” with other attendees including Henrick Svensmark, Robert Carter, and Nils-Axel Morner. [12]

​According to one profile, Ahluwalia has published numerous articles in the area of geological sciences.

A search of Google Scholar returns no articles written by Ahluwalia on the subject of climate.