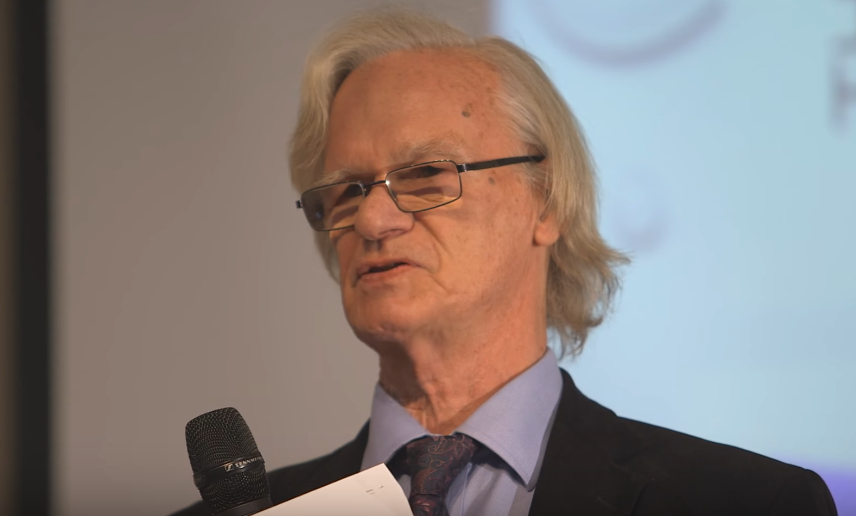 Christopher Booker was an English journalist, author, and columnist for The Sunday Telegraph. He passed away at the age 81 in July 2019. [2], [38]

Booker opposed the scientific consensus on numerous issues including global warming, the link between second-hand smoke and cancer, and the negative health effects of asbestos. [3], [4]

According to Carbon Brief, despite the agreement of major agencies including the World Heath Organisation and the US Department for Health and Human Services that all forms of asbestos are carcinogenic to humans, Booker also repeatedly claimed white asbestos “poses no measurable risk to health.”[1], [5], [6], [7]

In 2009, he published The Real Global Warming Disaster, described by The Observer as “the definitive climate sceptics’ manual.” [8]

“As many now also recognise – however fiercely it is denied – the late 20th century rise in temperatures, which set off the warming scare in the first place, has simply not continued. The pressure to keep the panic going dies away a little further with each passing year.

So Paris does indeed mark a historic turning point. It is the moment when the political panic over climate change finally begins to collide with inescapable realities.” [9]

“[A]lthough CO2 levels in the atmosphere have continued rising, it has become clearer than ever that global temperatures are no longer following suit… . evidence for a human link to such warming as has occurred in recent decades was not just being seriously exaggerated but even deliberately manipulated, to produce findings which the data simply did not justify.” [10]

Writing in The Telegraph, Christopher Booker described the Paris Climate Agreement as “all smoke and mirrors”:

“In reality, the Paris agreement was no more than a vainglorious act of collective wishful thinking, orchestrated to fool the world into thinking that anything of significance had actually been achieved,” Booke writes. “The one huge consolation from all this is that nothing said or done in Paris last December will have the slightest effect on the world’s climate.” [11]

“When future generations look back on the global-warming scare of the past 30 years, nothing will shock them more than the extent to which the official temperature records – on which the entire panic ultimately rested – were systematically “adjusted” to show the Earth as having warmed much more than the actual data justified.” [12]

“When I first began examining the global-warming scare, I found nothing more puzzling than the way officially approved scientists kept on being shown to have finagled their data, as in that ludicrous “hockey stick” graph, pretending to prove that the world had suddenly become much hotter than at any time in 1,000 years. Any theory needing to rely so consistently on fudging the evidence, I concluded, must be looked on not as science at all, but as simply a rather alarming case study in the aberrations of group psychology.” [13]

“The proselytisers for man-made global warming have long exercised a tight stranglehold over the contents of Wikipedia.” [14]

“The scientific evidence to support their belief that inhaling other people’s smoke causes cancer simply does not exist.” [3]

A complaint lodged with the Independent Press Standards Organisation (IPSO) watchdog regarding Booker’s article from July 25, 2018 was rejected.

In a blog post, Bob Ward, director of policy and communications at the London School of Economics Grantham Research Institute on Climate Change, argued there was a “fundamental flaw” with the watchdog’s complaints process, writing: [36]

“Unfortunately the IPSO Complaints Committee decided that the article did not breach the Editors’ Code of Practice and that Mr Booker was allowed to make up his own definition of heatwave, ignore the results of experts, and present meteorological information in a selective and misleading way.” [36]

Ward wrote a letter to the chair of IPSO, Sir Alan Moses, stating that the article “completely ignored robust and rigorous analysis by the Met Office which shows that the occurrence of heatwave conditions is becoming more frequent.” The letter asks Moses to review and amend the complaints process. [37]

During a heatwave in the UK, Booker wrote an article in the Daily Mail denying climate change had any role to play. He wrote: “We shall continue to have abnormally hot summers from time to time, just as we did in 1976 and 1846, way back before global warming was invented.” [35]

Booker wrote a GWPF report titled “Global Warming: A case study in groupthink,” which was subsequently promoted by a range of climate change denial blogs including JoNova, Watts Up With That?, and Climate Depot. Booker also wrote about his study at the Foundation for Economic Education. [29], [30], [31], [32]

The GWPF released a promotional video for Booker’s paper:

Daily KOS reported that Booker’s report “debunks itself,” pointing to “many self-contradictions Booker makes throughout the report that undercut his contention that climate science is groupthink.” [33]

When Booker introduced his report at the GWPF, he wrote: “Since we’ve now been living with the global warming story for 30 years, it might seem hard to believe that science could now come up with anything that would enable us to see that story in a wholly new light.” [34]

Booker’s statement would suggest the “debate” started in 1987, Daily KOS noted. However, Booker later wrote that “the story began in obscurity in the late 1970s,” making it 40 years ago. He further modified this date when he suggested that Richard Revelle’s measuring of CO2 in the 1950s was what “more than anything else that helped to set the great alarm over global warming on its way.” [34]

The key to Booker’s argument is that a groupthink belief is accepted “without a proper appraisal of evidence.” [34]

“Curiously, the report notes how ‘countless billions of dollars’ have been spent testing the theory of climate change, including $2.8 billion appropriated for federal research by George H. W. Bush over four years. Billions of dollars of research sure sounds like an appraisal of evidence, but that’s just the first of many self-contradictions Booker makes throughout the report that undercut his contention that climate science is groupthink,” DailyKOS reported. [34]

Writing in The Telegraph, Christopher Booker wrote that a recent heat wave was not as record-breaking as reported by the media. Booker pointed to data from the blogger Paul Homewood at notalotofpeopleknowthat who, in turn, linked back to Booker’s article in The Telegraph. [27], [28]

“All we can safely say, therefore, is that those official computer models didn’t predict anything of what has been actually happening,” Booker wrote. [27]

In the article, Booker also revealed that he was working for the Global Warming Policy Foundation (GWPF), a UK climate change denial think tank founded by Nigel Lawson. [27]

“I have lately been analysing in a paper for the Global Warming Policy Foundation, to show how the belief in man-made climate change has in every respect been a perfect case study in the rules of groupthink first identified 45 years ago by Irving Janis, a professor of psychology at Yale.” [27]

Booker wrote an article in The Telegraph where he describes global warming as “the greatest and costliest scare story the world has ever known.” Referring to an article he wrote in 2015, Booker claims that: [26], [12]

“[T]emperature records all over the world had, seemingly, been systematically ‘adjusted’ to show older temperatures lower than those originally measured and more recent temperatures higher than those recorded: thus conveying the notion that the world is warming significantly more than the actual data justified.” [26]

Booker goes on to highlight accusations made by John Bates who made allegations regarding NOAA paper written before the Paris climate conference in 2015. [26]

“That, to many, looks like the paper was designed to stoke up hysteria over global warming in the run-up to the conference,” Booker wrote. “What Dr Bates now claims is that, in defiance of rules he himself drew up and over his (Bates’s) private objections, Karl’s paper had again been based on ‘adjustments’ that the scientific evidence didn’t justify,” he added. [26]

Writing in The Telegraph, Christopher Booker described the Paris Climate Agreement as “all smoke and mirrors.”  [11]

Booker contended that large emitters like China have “no intention of halting the rise in its ‘carbon emissions’ at all,” making it a “meaningless […] exercise.”

“In reality, the Paris agreement was no more than a vainglorious act of collective wishful thinking, orchestrated to fool the world into thinking that anything of significance had actually been achieved,” Brooker Writes. “For the rest of us, of course, the one huge consolation from all this is that nothing said or done in Paris will have the slightest effect on the world’s climate – as eventually, to their undying shame if they live long enough, all those poor deluded politicians may come to realise.” [11]

Christopher Booker wrote an article in The Telegraph titled, “The fiddling with temperature data is the biggest science scandal ever.” Booker writes future generations will “look back on the global-warming scare of the past 30 years” and “nothing will shock them more than the extent to which the official temperature records […] were systematically ‘adjusted’ to show the Earth as having warmed much more than the actual data justified.” [12]

Booker references “statistician Steve McIntyre“ as one of the first people to “expose” “examples of these ‘adjustments’” in 2007. [12]

SkepticalScience responded to Booker’s accusations, where Kevin Crowtan examines the data and explains why the adjustments in question “are clearly justified and necessary, revealing the baselessness of Booker’s conspiracy theory.” Video below: [25]

The article alleged that Pachauri had been “making a fortune from his links with ‘carbon trading’ companies,” and that he had outside interests which would cause a “conflict of interest” with his position at the IPCC.

Although the story was untrue, it circulated over hundreds of blogs and its allegations were widely spread before The Telegraph retracted it. An archive of the original is still available here. [15], [16]

Shortly after the article was published, The Energy and Resources Institute (TERI), the organization that Pachauri works for, asked auditors to review his financial relationships.

“No evidence was found that indicated personal fiduciary benefits accruing to Pachauri from his various advisory roles that would have led to a conflict of interest.” [16]

When Pachauri first approached the Telegraph he was rebuffed while their journalists continued to produce damaging articles and blog posts. He was forced to start a libel suit, and months later the Telegraph issued an apology and retraction. [17]

Christopher Booker was a speaker at the Heartland Institute‘s 2009 International Conference on Climate Change.

His speech, titled “From BSE to Global Warming: Why Scares are Costing Us the Earth” can be viewed below. [18]

DeSmogBlog researched the funding behind the conference and found that sponsor organizations had collectively received over $47 million from energy companies and right-wing foundations, with 78% of that total coming from the Scaife Family of foundations. A transcript of Booker’s speech is available at the Heartland Institute website as a “Policy Document.” [10]

George Monbiot of The Guardian launched a prize to be “presented to whoever crams as many misrepresentations, distortions and falsehoods into a single article, statement, lecture, film or interview about climate change.” [19]

Booker published an article titled “The world has never seen such freezing heat” in The Telegraph. [21]

While the article portrays itself as a exposé that brings mainstream climate science into question, other sources suggest that the article contains significant bias and logical fallacies. [22]

According to a search of Google Scholar, Christopher Booker has not published any scientific articles relating to climate change. [23]

Here is a list of the articles he has written for The Sunday Telegraph.