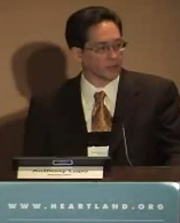 Craig Loehle is the principal scientist with the National Council for Air and Stream Improvement, which was established in 1943 by the pulp and paper industry to “provide technical assistance for the industry’s goal of lowering the ecological impact of its spent pulping liquors.” [2]

“I am not a ‘denialist’ and my recent paper… attributes about 40% of recent warming to human activity – estimating that this equates to a no-feedback atmosphere.

“What I would deny is that tree rings are good thermometers, but this is a scientific view based on my knowledge of trees, not a political view.” [3]

“The climate change “biodiversity crisis” is like a whack-a-mole game (a carnival game where plastic animals pop out of holes and you try to whack them with a mallet), with an almost-daily claim popping up about this species or that at risk from climate change. Not just polar bears and coral reefs, but even avocados are going to disappear! Whacking each silly claim one by one is an impossible task, and the claims get into public consciousness whereas the refutations do not.” [10]

“I am not part of a conspiracy and am not directed by anyone. I have never received money from fossil fuel interests, as Mann states is true of all sceptics. On the contrary, I work for the US wood products industry (which has no official position on climate change and does not tell me what to say or think). This industry is the largest single renewable fuels user because it uses wood waste to generate steam and power at paper mills. It is also the largest recycler (of paper), plants millions of trees every year, and manages millions of acres of forest land to ensure protection of wildlife. Only a fraction of my work concerns climate change.” [3]

“Within the United States, the claim that bad climate effects can ‘already’ be detected is a totally subjective and unsupported hypothetical.” [4]

Craig Loehle was a speaker at the Heartland Institute’s Ninth International Conference on Climate Change (ICCC9) in Las Vegas, Nevada. [11]

Craig Loehle was a speaker at the Heartland Institute‘s Seventh International Conference on Climate Change (ICCC7).

Co-authored a study (PDF) with fellow climate change skeptic Nicola Scafetta. The study, titled “Climate Change Attribution Using Empirical Decomposition of Climatic Data,” contends that “current models underestimate the strength of natural multidecadal cycles in the temperature records, the anthropogenic contribution to climate change since 1850 should be less than half of that previously claimed by the IPCC.” [5]

Loehle was a speaker at the Heartland Institute’s 2009 International Conference on Climate Change (ICCC2).

DeSmogBlog researched the funding behind Heartland’s Second International Conference on Climate Change, and found that sponsor organizations had received over $47 million in funding from energy companies and right-wing foundations, with 78% of that total coming from the Scaife Family of foundations.

The original study, which contained numerous issues, was corrected in a subsequent publication. According to RealClimate, the corrected study still contained inappropriate data selection, or the calibration and validation issues. [7]

Loehle commented on the corrected study at Anthony Watts’ blog Watts Up With That (WUWT).

According to his profile at the Heartland Institute, Loehle has written more than 100 peer-reviewed papers in forestry, ecology, geophysics, modeling, and other fields.

Horizon Research is included academic librarian Jeffrey Beall’s list of “Potential, possible, or probable predatory scholarly open-access publishers.” According to Beall, while the journal describes itself as a USA entity, the publisher uses the URL http://zj.nkwww.com/, which is registered to Wanlun Guo in Linyi, Shandong, China. [13], [14]

“Apparently this is a Chinese operation and the spam email is misrepresenting the publisher’s true location,” Beall writes. [14]

Here are some examples of Loehle’s publications in E&E: