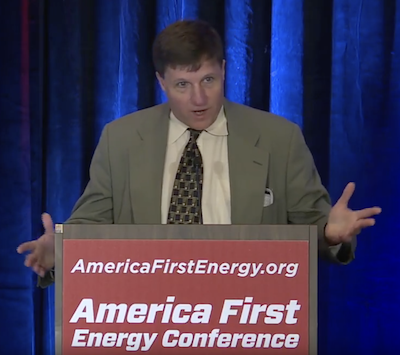 Speaking at the Heartland Institute’s America First Energy Conference, Richardson described himself as a “PR and marketing guy from way back.” Richardson first got involved in PR in the early 1990s and spent seven years of his career working at four different ad and PR agencies. [4]

Richardson was a former aide for Congressman Steve Largent’s Leadership for America’s Future PAC (LEADPAC), and also worked for former Majority Leader Tom DeLay’s campaigns. Richardson founded Richardson Consulting in November 2003 and was also co-founder of Washington Strategies before selling his interest in 2002 and moving on to work as Vice President of DCI Associates, the government affairs division of DCI Group. [5]

Richardson is a former partner of Richardson Ziebart Consulting, a firm that has worked with the tobacco industry. Richardson has conducted research on a number of issues for groups such as The Tobacco Institute and R.J. Reynolds Tobacco, and his name also appears in Philip Morris tobacco records.

Richardson was listed as a “Consultant” for youth smoking prevention in 1999 while working with Washington Strategies, according to in Philip Morris records. [6]

Craig Richardson and Geoff Ziebart of RichardsonZiebart Consulting, L.L.C. sent a memo to Pat Donoho, then-senior-vice-president of State Affairs for the Tobacco Institute, regarding research Richardson was conducting on the Reiner Initiative‘s “structure and current programs.” [7]

Richardson and Ziebart also produces a research series on the proposed Reiner California initiative in late 1997. [8]

According to Gunn’s expense report at The Tobacco Institute, he also met with Geoff Ziebart and Craig Richardson on November 17, 1997 where they “discussed CA initiative.” [11]

As documented in Heartland Tobacco War, Richardson Ziebart Consulting was contracted to write a consulting report titled “Oklahoma Tobacco Regulation and Control” for Philip Morris. The report included information on how government bodies operated, federal involvement in tobacco control, and details on the operations of health groups. [12], [13]

On January 6, 1998, RichardsonZiebart Consulting also wrote a report on the supposed “Waste, Fraud & Abuse” of Proposition 99, which would increase cigarette taxes. [14]

Richardson appeared on an episode of InfoWars, speaking with David Knight about his views on climate change and Al Gore: [17]

“When you look at the IPCC you have to, for those viewers who don’t know, that was the initial UN committee that started out in the early 90s. Discovering at that time, as you recall, it was global warming, and then the narrative didn’t fit so now it went to climate change because we’ve been in a 20 year pause in terms of temperature rise.”

”[…] It is a communist plan, essentially, to centralize one of the most important assets of our lives—and that’s energy. […] Everybody understands, who has a brain, that this whole thing is nothing but a series of talking points in order to try to control energy, like you said, but not just from the Marxist Communist point of view, but obviously the green energy people like Tom Steyer and others and the Rockerfellers […]”

During the interview, Richardson also claims that Communism has infiltrated our schools:

“I thought we defeated Communism on the other shores, and now it’s inside our own country. It’s been in the school systems and everywhere else, and now we have the fight right here, and it’s going to be the fight of our lifetime.” [17]

On the endangerment finding for CO2:

“The underlying issue is based on faulty science to begin with. But now, at this point, the endangerment finding was decided on science that came out in the 1990s and it was all speculative and all the models Al Gore did his original movie on, none of which have come anywhere near the truth. So what Scott [Pruitt] is trying to do, Administrator Pruitt and others, is say let’s open up that scientific debate. Let’s have that scientific debate. Let’s look at the data and see whether or not this is actually an endangerment. And that’s the battle that needs to happen.” [17]

“I’m going to leave some of this at the feet of the corporations, because I think they are as much to blame for what’s going on today — in fact, they’re funding a lot of what’s going on and using environmental groups as sort of the front page,” Richardson said. [1:06]

Writing at The Daily Caller, on recent climate change lawsuits brought on by states against energy companies, Richardson declared: [18]

“Politicians seeking to curry favor with an insatiable environmental movement and their donor base are attempting to feed a beast that will never be satisfied while threatening America’s energy producers, thousands of domestic manufacturers, and billions in pension plans and retirement funds that are correctly invested in American energy production. These frivolous lawsuits pursue a dangerous agenda and represent an abuse of our legal system.”

Richardson appeared in Marc Morano’s 2020 film Climate Hustle 2: Rise of the Climate Monarchy, produced by the Committee for a Constructive Tomorrow (CFACT). During a discussion which characterised climate breakdown as a manufactured crisis, Chris Horner stated: “catastrophic man made global warming is a vehicle,” to which Richardson responded: “global warming is not an end in itself. It’s a means to an end and that means to an end is the redistribution of wealth.” [30]

Describing CAFE, the letter contends: “Those families and individuals who prefer or need trucks, SUVs, and crossovers pay more to subsidize those who buy smaller vehicles or electric vehicles under the existing mandate. This significant, needless, and unjust cost is a very real regressive tax on American families that has made our country worse off.” [29]

Craig Richardson, representing the E&E Legal Institute, was a signatory to an American Energy Alliance open letter to President Trump, congratulating him for rolling back Corporate Average Fuel Economy (CAFE) standards and urging him not to cut a deal with California to allow them to operate with separate regulations. [28]

“Your efforts to reform this mandate will save consumers money, preserve their choices, and ensure that the federal government, and not a single state, sets national policy,” the letter reads. [28]

“The existing mandate makes cars more expensive. …  In short, because of the mandate, those consumers who prefer trucks, SUVs, or crossovers pay more to subsidize those who buy smaller vehicles or electric vehicles.” [28]

Craig Richardson, representing E&E Legal, signed on to an open letter organized by the American Energy Alliance designed to fight against an electric vehicle tax credit. [26]

According to Pyle and others who signed the letter, electric vehicle tax credits “overwhelmingly benefit the rich.” DeSmog’s Koch vs. Clean project has systematically debunked this, among other well-rehearsed talking points and misinformation put forward by industry about electric vehicles. [27]

The letter cites research by the Pacific Research Institute (PRI), a group that has received over $600,000 from ExxonMobil and millions from “dark money” groups DonorsTrust and Donors Capital Fund.

“The purpose of this event is to promote and expand energy freedom in the United States, as outlined in President Donald Trump’s bold America First Energy Plan, a proposal first released during the 2016 presidential campaign. The president’s plan marks a decisive change in direction from the Obama administration’s ‘war on fossil fuels’ and focus on the theory of catastrophic man-caused climate change,” the conference description reads. [20]

He spoke on a panel titled “Fiduciary Malpractice: The ‘Sustainable’ Investment Movement.” See video below. [21]

“I’m going to leave some of this at the feet of the corporations, because I think they are as much to blame for what’s going on today — in fact, they’re funding a lot of what’s going on and using environmental groups as sort of the front page,” Richardson said. [1:06]

He goes on to discuss “virtue signaling,” defining it as “The idea that having and expressing a particular opinion makes you morally superior.” He cites examples of this as the Women’s March and what he describes as a “white guilt” campaign. “Of course, climate change in the environment has been a famous one for a long time, and I know we deal with that every day,” Richardson claimed. [5:00]

Richardson suggests that Americans have worried less about the environment because it’s already “pretty clean”:

“As Americans have started worrying about the state of the environment, because it’s pretty clean, all of a sudden we’re seeing more and more doom and gloom corporations and NGOs jumping on the climate change bandwagon.

“So, this must be the market driving it right? The market must be all-in for this. So, we see what’s going on here with ExxonMobil, we know with ALEC conference, they’re pulling out. Suddenly we have an interesting thing. We have a […] can someone tell me what the ‘P’ stands for in the BP? Petroleum. So we have British Petroleum running an ad campaign saying beyond petroleum worldwide. Be like Ford Motor Company saying beyond motorcars. Can you envision it? What message that’s sending to your stockholders?

“And then here’s a page from ExxonMobil’s climate carbon summary. You can see they’re all in. Paris. They’re supporting Paris. They’re into this. This is a George Shultz and those other, whatever you want to call them, Climate Leadership Council. And you know carbon tax—they’re all in, ExxonMobil. And then even the big energy users are all in. […] [11:02]

“The real game, I believe, is actually a coup of sorts by large corporations working with like large businesses to drive an agenda that’s not in the best interests of the American people or the world, for the simple reason of profits and control,” he concluded. [15:50]

“This is a major international effort and push by those global elitists and the governments they prop up and support and corporations behind them,” Richardson said.

“I was actually in Paris. I was at the COP21 where the UN folks signed all that. We were the anti-COP group, and my colleague Chris Horner and others had wanted posters plastered all over Paris when we arrived.” [23]

Knight responded that carbon taxes are “something that could fund a world government.” They “need a worldwide problem that they can have a world-wide tax to.” [23]

Richardson appeared again on the program in August 2017 to discuss “Al Gore as a Climate Change Denier.” [23]

Richardson was named executive director of the newly formed American Tradition Institute (ATI), a group that served as the precursor to E&E Legal. [22]

“We are a relatively new organization with a tremendous track record and impact, and we needed a veteran leader to join our team,” said David Schnare, Director of ATI‘s Environmental Law Center. “Craig, with his proven organizational, communications, fundraising, issues, and political expertise, is a perfect fit for us at this stage of our growth and development, and we are confident he will lead ATI to the next level.” Schnare added. [22]

In 1995, Richardson co‐authored, Red Tape in America, published by the Heritage Foundation. According to Richardson’s E&E Legal bio, “The book details excessive government regulation, its impact on the U.S. economy, and its citizens.” [2]