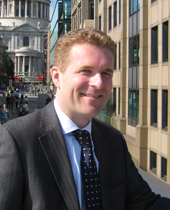 Dan Lewis is the Chief Executive of the Economic Policy Center, a UK economic think tank with a mission to “promote high quality research and debate across all areas of economics in a free democratic society.” Lewis has also been the Energy Policy Advisor for the Institute of Directors where he “published, edited, broadcasted and commissioned many papers on energy matters.” he is the founder and Chief Executive of Future Energy Strategies, an energy reporting company that reports to provide “strategic insight into the future shape of the energy industry in Britain and across the European market.” [2]

Prior to September 2009, Lewis was the Research Director of the Economic Research Council for six years. He was also the founder of Alternative Energy Investor, a “global resource bank” that existed from 2006 to 2009. He is also Director and owner of UKCrimeStats, “the UK‘s leading independent crime data platform.”

Lewis is also a journalist and broadcaster, and has contributed articles to a number of media outlets including Wall Street Journal, Al-Jazeera, Sky News, BBC Radio, The Daily Telegraph and World Finance Magazine. He is a notable  proponent of hydraulic fracturing, or fracking in the UK. [1], [3]

“[T]he risks of electricity blackouts and gas shortages from the middle of the next decade are a lot more tangible and closer in time than whatever will happen to the climate.” [4]

“There really is quite staggering ignorance about the huge scale, environmental and economic benefits of shale gas in the UK – were we to go ahead and use it.” [5]

Lewis is the co-author or a report, titled “Getting Shale Gas Working” (PDF) that details the ways a shale industry could develop in Britian following the 2013 lifting of a moratorium on fracking. It was authored for the Institute of Directors and sponsored by Cuadrilla Resources Ltd,  which describes itself as “a privately owned British exploration and production company focused on discovering and recovering natural resources, primarily natural gas, from shale rock.” [8]

Dan Lewis was a speaker (PDF) at the Eighth International Conference on Climate Change (ICCC-8)/Fifth International Conference on Climate and Energy (ICCE-5) sponsored by both the Heartland Institute and the European Institute for Climate and Energy (EIKE). Lewis’s speech is titled “Peak Oil, Peak Gas? Do we need an Alternative Energy Supply?” [6]

Lewis is the co-author of a report, titled “Britain’s shale gas potential” (PDF) that advocates the development of shale gas in the UK. He authored the report for the Institute of Directors where he is Energy Policy Advisor. Lewis also appeared on Sky TV news where he made the case for exploiting UK shale gas reserves. [5]

According to the report, “Although there have been problems at a small number of wells, these are generally due to poor practice, rather than the nature of the fracking process itself. The UK, of course, has the opportunity to learn from mistakes made in the US.” And, in conclusion, “Hydraulic fracturing, as this chapter has shown, is also not without risk. But as the expert reports have made clear, the risks can be managed.”

Dan Lewis organized a seminar under the aegis of Future Energy Strategies to discuss “Shale Gas in Europe.” The event featured a number of shale gas industry experts, including John Buggenhagen, Vice President of Exploration at San Leon Energy described as a “proven ‘oil finder’” in North America and Europe. Other speakers included Leigh Bolton, the Founding Principal and Manager Director of Holmwood Consulting, a “LNG, Natural Gas, Oil and broader Energy consultancy,” and Nick Grealy, the publisher of Not Hot Air, described as “the world’s leading unconventional gas blog.” [7]

Dan Lewis published a report for the Economic Policy Center titled “Securing Our Energy Future: Why and How It Must be Done” (PDF). The report opposes carbon taxes and carbon trading programs. It also offers the following recommendations (Emphasis added):

The report concludes that “For too long, received opinion  has fretted about the UK’s carbon footprint without giving a moment’s thought to its energy security footprint. This is no longer acceptable.”

Dan Lewis appears to have published a number of articles in crime prevention. His books have have included: Recharging The Nation – The Challenge and Cost of Renewable Electricity  Generation (2003), The Essential Guide to British Quangos 2005, The Larceny of the Lottery (2007, CPS with Ruth Lea), The Digest of Energy Statistics 2008 and The Essential Guide to EU Quangos 2009.