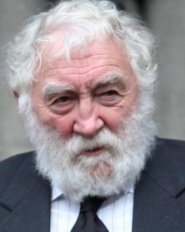 David J. Bellamy OBE (born 1933) was an English professor, botanist, author, broadcaster and environmental campaigner. He passed away in December 2019. [28]

A typographical error in a letter he published in the New Scientist on April 16th, 2005, suggested a large percentage (555 of 625) of the world’s glaciers were advancing, not retreating. George Monbiot investigated and found the claim to be untrue and misleading. Bellamy subseqently admitted that his figures were incorrect, and also announced he had “decided to draw back from the debate on global warming.” [4], [24]

On May 25, 2005, The Times reported that Bellamy would likely lose his role as president of Plantlife International and the Royal Society of Wildlife Trusts, two organizations that have actively warned of the dangers plants and wildlife face due to climate change. “They have been acutely embarrassed to discover that while they have been campaigning to raise awareness, their president has been leading seminars and writing articles in science magazines declaring that man-made warming is a myth,” The Times noted. [5]

Bellamy has opposed wind farms in undeveloped areas, first getting involved in the issue in 1996.  although doesn’t always appear to have held anti-wind views. He was once enthusiastic about wind power in the 1989 educational video Power from the Wind, which was produced by Britain’s Central Electricity Generating Board. [25], [22]

Bellamy has claimed his views on climate change were responsible for the end of his TV career, claiming he was “shunned” because “they didn’t want to hear the other side.” His TV prominence began in the late 1960s, after being an environmental consultant during the Torrey Canyon disaster. He later appeared on “Life in Our Sea” on the BBC.

Bellamy was quoted in a short profile piece at The Telegraph: [19]

“I’m sceptical about man-made climate change. There’s absolutely no proof that carbon dioxide will kill us all. It’s not a poison, it’s the most important gas in the world. Carbon dioxide is an airborne fertiliser. How can farmers grow increasing amounts of food without a rise in CO2?”

According to The Times, Bellamy had given a keynote speech at the Royal Institution in London where he declared:

“Global warming is a largely natural phenomenon. The world is wasting stupendous amounts of money on trying to fix something that can’t be fixed.” [5]

In an article in The Daily Mail titled “GLOBAL WARMING? What a Load of Poppycock!” Bellamy said he believed that: [21]

“[G]lobal warmig is largely a natural phenomenon that has been with us for 13,000 years and probably isn’t causing us any harm anyway […]”

In the preface to the 1989 book, The Greenhouse Effect, Bellamy was quoted: [20]

“The profligate demands of humankind are causing far reaching changes to the atmosphere of planet Earth, of this there is no doubt. Earth’s temperature is showing an upward swing, the so-called greenhouse effect, now a subject of international concern. The greenhouse effect may melt the glaciers and ice caps of the world causing the sea to rise and flood many of our great cities and much of our best farmland.”

Quoted in an interview with The Journal, Bellamy was critical of wind turbines: [25]

“Every turbine you put up has to have back-up electricity produced because the wind goes up and down, it is inconsistent.

“Wind farms are totally useless environmentally. But there are people who are getting a vast amount of money just to put these things up. And who pays for them? The people who use the electricity in Britain. The more wind farms we put up the more electricity costs.

“I’ve noticed the impact of wind farms on Country Durham, you can’t fail to.

“Its not just me, I’ve worked with artists going around painting what these stunning landscapes would look like with these monsters going up. There’s a number of areas in Weardale and Teesdale where there are proposals in and they could happen. But I’m keeping up the campaigning.”

In an interview at The Daily Express, reported on by George Monbiot at The Guardian, Bellamy had said of peer-reviewed journals: [27]

“[P]eer-reviewed journals – it’s the last thing I would use now.”

In an article titled “The Global Warming Myth” at The New Zealand Centre for Political Research, Bellamy wrote:

“I don’t like being called a denier because deniers don’t believe in facts. There are no facts linking the concentration of atmospheric carbon dioxide with imminent catastrophic global warming there are only predictions based on complex computer models.” [6]

In a submission to New Scientist, Bellamy wrote:

”[…] [I]t should be pointed out that glaciers in many other parts of the world are not shrinking but in fact are growing. […] Indeed, if you take all the evidence that is rarely mentioned by the Kyotoists into consideration, 555 of all the 625 glaciers under observation have been growing since 1980.” [7]

Bellamy is a signatory to displayed full-page ad funded by the CATO institute that appeared in numerous newspapers including The Washington Post, The New York Times, and the Chicago Tribune in 2009.

The advertisement criticizes President Obama’s declaration that “few challenges facing America and the world are more urgent than combating climate change,” claiming that “with all due respect Mr. President, that is not true.”

The ad claims “there has been no net global warming for over a decade,” and that the dangers associated with global warming are “grossly overstated.” [8]

Bellamy went on New Zealand’s 3 news for an interview on his views on climate change: [26]

“For the last 10 years, man-made global warming […] has stopped,” Bellamy said. “Because temperatures have gone down.” He added “Where’ heading for 30 years, pretty cold.”

Featured speaker at the press conference for the Fraser Institute 2007 Independent Summary for Policymakers. [9]

In an April 2005 letter published in the New Scientist, Bellamy had claimed that a large percentage of the world’s glaciers were advancing (555 of 625), not retreating. On May 29, 2005, Bellamy wrote a letter to the Sunday Times, he had “decided to draw back from the debate on global warming.” [24]

Bellamy debated the issue with George Monbiot on Channel 4 News:

According to a search of Google Scholar, David Bellamy has published only one article in a journal on the subject of climate change: “Carbon is the World’s Best Friend,” co-published by Bellamy and Jack Barrett, was published in the Energy & Environment (E&E), a journal edited by climate change skeptic Sonja Boehmer-Christiansen. E&E  has faced criticism in the past for its peer review process. [18], [17]

Bellamy has published articles skeptical of climate change in numerous newspapers, and some in journals that don’t normally cover climate change (such of Civil Engineering). For example: