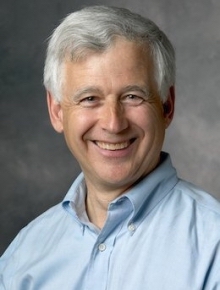 David R. Henderson, not to be confused with his UK counterpart Patrick David Henderson, is a Senior Fellow with the Fraser Institute and research fellow at the Hoover Institution. [1]

From 1982 to 1984, Henderson served on President Reagan’s Council of Economic Advisers as a senior economist specializing in energy and health policy. [2]

Henderson co-edits EconLong, the blog of the Library of Economics and Liberty along with Bryan Caplan. Alberto Mingardi, Scott Summer and guest blogger Emily Skarbek are also contributors. [3]

Henderson has consistenly questioned whether climate change is something to worry about, suggesting there are bigger risks to our society. He is an opponent of the carbon tax, and is against Corporate Average Fuel Economy (CAFE) standards. [4], [17], [6]

Henderson is co-author, with John H. Cochrane, of a Wall Street Journal article titled “Climate Change Isn’t the End of the World”: [4]

“Global warming is not the only risk our society faces. Even if science tells us that climate change is real and man-made, it does not tell us, as President Obama asserted, that climate change is the greatest threat to humanity. Really? Greater than nuclear explosions, a world war, global pandemics, crop failures and civil chaos?”

“No. Healthy societies do not fall apart over slow, widely predicted, relatively small economic adjustments of the sort painted by climate analysis. Societies do fall apart from war, disease or chaos. Climate policy must compete with other long-term threats for always-scarce resources.

[…] “Global warming is not even the obvious top environmental threat. Dirty water, dirty air and insect-borne diseases are a far greater problem today for most people world-wide. […]” [4]

Writing at the EconLong blog, Henderson notes that while he’s “not been a fan of Donald Trump,” he was “ pleasantly surprised by many of his picks for cabinet positions.” For example, he said it’s a “good sign” that Scott Pruitt is a climate change denier: [5]

“The EPA is out of control. In a forthcoming review in Regulation, I lay out the problem with its push for higher fuel economy in cars. But it’s out of control in other ways too. Pruitt will likely rein in, and even reverse, some of its most extreme excesses. One good sign: he is a global warming skeptic. […]” [5]

“Alex Epstein’s new book, The Moral Case for Fossil Fuels, needed to be written. He makes a powerful, practical case for using more, not less, fossil fuel, and his practical case is also his moral case. Thus the book’s title.” [7]

”[…] I’ll close on a positive note. Epstein’s last chapter is his best and should have been his first chapter. In it, he tells how he paid famous environmentalist Bill McKibben $10,000 to debate him. That alone impressed me. Epstein tells the story in such a dramatic way that it almost gave me chills. I recommend reading it first; you will likely then be motivated to read the rest of the book.” [7]

In a review for the Cato Institute, Henderson criticizes a book suggesting benefits in investing in clean energy: [8]

Writing at the Hoover Institution, Henderson and his co-author Charles L. Hooper questioned the validity of climate models, saying they have been dealt a “devastating blow” due to the factors of measurement error, the sun, and “cloud errors.” [9]

Under “other uncertainties,” the authors wrote: “The glacial record shows geological periods with rising CO2 and global cooling and periods with low levels of atmospheric CO2 and global warming. Indeed, according to a 2001 article in Climate Research by astrophysicist and geoscientist Willie Soon and his colleagues, ‘atmospheric CO2 tends to follow rather than lead temperature and biosphere changes.’” [9]

Henderson does not note that Willie Soon was responsible for another Climate Research paper that resulted in three of the journal’s editors resigning in protest, declaring the work seriously flawed. [10]

Hooper and Henderson published a nearly identical article in the winter 2016/2017 issue of the Cato Institute journal, Regulation, titled “A Fatal Flaw with Climate Models.” [11]

Henderson is featured in a PragerU video suggesting an abolishment of the minimum wage. “While Congress discusses a minimum wage hike, economist David Henderson shows that any minimum wage makes it harder for unemployed people (particularly young people) to find work, and forces business owners to cut the hours of lower-skilled employees,” the video description reads. [12]

According to their website, PragerU’s mission is to “spread what we call ‘Americanism’ through the power of the Internet. Our five-minute videos are conservative sound bites that clarify profoundly significant and uniquely American concepts for more than 100 million people each year.” They focus on “Judeo-Christian” values including “freedom of speech, a free press, free markets and a strong military to protect and project those values.” [13]

According to Conservative Transparency, PragerU has received $215,000 from the conservative Lynde and Harry Bradley Foundation and has also been funded by the billionaire brothers Dan Wilks and Farris Wilks, who made their money in the fracking industry. [14]

After climate change denier Matt Ridley published his book, The Rational Optimist: How Prosperity Evolves, even some at the libertarian Cato Institute had criticism of the work. As noted by Cato’s own David Boaz, Henderson was not one of them. [15]

“Henderson enthusiastically endorses the style and substance of Ridley’s book, though without identifying the weaknesses highlighted in the former review,” Boaz wrote at Cato. [15]

Henderson published his original view in the Fall 2010 edition of Regulation, where he also points to Indur M. Goklany and the late Julian Simon as “the strongest voices for reason and optimism in a congenitally pessimistic world.” [16]

“Why read Ridley if you have already read and absorbed Simon and Goklany?” Henderson asks. ” First, Ridley is an incredible writer who keeps you turning the page to find out what happens next.” [16]

“His calculations at key points in the argument show just how ‘ungreen’ some supposedly environmental policies are, particularly organic farming and renewable energy,” Henderson added. [16]

Henderson wrote an article in the Jan/Feb 1985 issue of the Cato Institute’s Regulation where he opposed Corporate Average Fuel Economy (CAFE) standards. [17]

“With the decontrol of gas prices, consumers already pay full price for their gasoline and therefore already have appropriate incentives to conserve. CAFE only hurts consumers by preventing them from buying the kinds of cars they really want,” Henderson wrote in the article titled “The Economics of Fuel Economy Standards.” [17]

According to his profile at the Fraser Institute, Henderson regularly contributes to The Wall Street Journal and formerly to Fortune. He has also written for the Journal of Policy Analysis and Management, Journal of Monetary Economics, Cato Journal, Regulation, Contemporary Policy Issues, and Energy Journal. He is also the editor of The Concise Encyclopedia of Economics. [2]

Henderson has been a regular contributor the Cato Institute publication, Regulation. He is also the author of several Cato “briefing papers” and “policy reports.” Sample Regulation articles below.