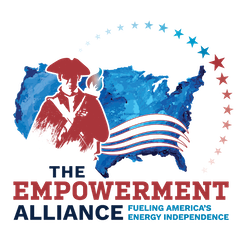 The Empowerment Alliance (TEA) is an anonymously funded 501(c)(4) nonprofit that launched on September 30, 2019 with the goal of fighting liberal policies, specifically the Green New Deal, and promoting natural gas. [1]

“The Green New Deal, as a national conversation, needs to be put in context with reality and facts. And in this era of hyperpartisan atmospherics, it’s important that there be a balanced approach to this subject of America’s energy independence and America’s future as it relates to its economy and its environment,” Terry Holt, the group’s spokesman and a partner at public relations firm HDMK, told E&E News. [1]

“America’s natural gas supplies are its core national security asset. And in today’s political environment, our natural resources are being pulled apart by this dynamic between energy versus the environment.” [1]

Holt said he wanted the group to be “a significant factor in the 2020 election,” Politico reported. The group’s plans included running ads, engaging in “grassroots work,” reaching out to media, and possibly a future lobbying operation. [2]

The group’s mission, according to its website, is to “secure America’s energy independence and, with it, Americans’ prosperity, freedom, and security.” TEA promises to “harness the power of American ingenuity, the tenets of our free market system, and the abundance of our nation’s natural gas supply to forge a more realistic, rational, and effective approach to energy consumption and environmental conservation than the risky tax scheme known as the ‘Green New Deal.’” [8], [9]

One of The Empowerment Alliance’s central points is promoting natural gas in reponse to “radical” proposals like the Green New Deal that call for phasing out all fossil fuel extraction. Reuters reported TEA “will fund advertising and research to advocate the use of natural gas, which burns cleaner than coal, in the runup to the U.S. presidential election in November of 2020.” [3]

As DeSmog reported in 2019, while natural gas has often been referred to as a “bridge fuel” to cleaner sources of energy — recent reports have shown that it cannot be part of any climate solution. A report from Oil Change International, Burning the Gas “Bridge Fuel” Myth: Why Gas is Not Clean, Cheap, or Necessary, highlights that there is no room for further fossil fuel development, including natural gas, within Paris Agreement goals. [4]

“Natural gas is the cleanest of fossil fuels and can be used in many ways to help reduce the emissions of pollutants into the atmosphere.” […]

Natural gas can help to mitigate some of these environmental issues, including greenhouse gas emissions, pollution from transportation, industrial and electric generation emission, as well as smog and acid rain.”

In the group’s initial press release, Jim Nathanson, Executive Director for TEA, said that renewable energy was not an option:

“There is simply not enough solar and wind infrastructure to fuel our growing economy or provide American businesses and consumers with affordable energy.”

Terry Holt declined to disclose the group’s budget, claiming that revealing the funding sources would put them in harm’s way: [1]

“Because of violence and trespassing and other criminal behavior, the Empowerment Alliance is going to protect its donors from that kind of risk,” he said. “We are offering donors this protection out of the concern that we would have should they come forward and the scrutiny of some of these eco-terrorists.”

The following is from The Empowerment Alliance’s donation form: [10]

“There are no limits on the amounts that may be contributed to The Empowerment Alliance, Inc. by an individual, corporation, union, or trade association.

The Empowerment Alliance’s policy is to not disclose its donors to the general public.

Contribution to The Empowerment Alliance, Inc. are not tax deductible.

Contributions to The Empowerment Alliance, Inc. do not count against an individual’s biennial aggregate contribution limit under the Federal Election Campaign Act, as amended.

The Empowerment Alliance, Inc. is not registered or operating as a political committee under federal, state or other applicable law.”

Holt was a senior communications strategist and spokesman for the 2000 and 2004 Bush/Cheney presidential campaigns. He has also worked as communications director for former Speaker John Boehner in the U.S. House of Representatives, and also for Budget Committee chairman John Kasich. In the Senate, he worked as press secretary on the Senate Foreign Relations Committee for Richard Lugar from Indiana. [5]

According to his profile at HDML, “Holt is also a veteran of the Republican National Committee and the National Republican Congressional Committee.” Holt’s partner at HDMK, Trent Duffy, worked under President George W. Bush in the White House for several years. [5]

In 1988, Nathanson was the executive director of George Bush’s presidential campaign in Ohio. He was deputy political director of the Republican National Committee. He was former visiting assistant professor of political science at at the State University of New York and also at Case Western Reserve University. According to a 1990 profile in The Baltimore Sun, “Nathanson also has assisted in the political campaigns of several past and present officeholders, from judges to governors, to congressmen. He is involved in fund-raising, community relations, campaign management, and political organization, analysis and communication for the Republican party.” [6], [7]

“The new 501c4 will engage national political leaders, the media, and voters with research and paid advertising, warning against the consequences of radical proposals that would devastate our country’s position as the world’s lone superpower and hurt millions of Americans at all income levels. “

“The recent attack in Saudi Arabia shows that our enemies are getting more sophisticated and that America is still at risk from events overseas,” said Jim Nathanson, Executive Director for TEA. “But the Green New Deal and other ideas would make those attacks seem small by comparison, as they would weaken America and take us back to energy dependence. There is a better path.”

According to data from OpenSecrets, HDMK has done lobbying for a number of electric utilities among other industries: [13]

According to the group’s donation form: [10]