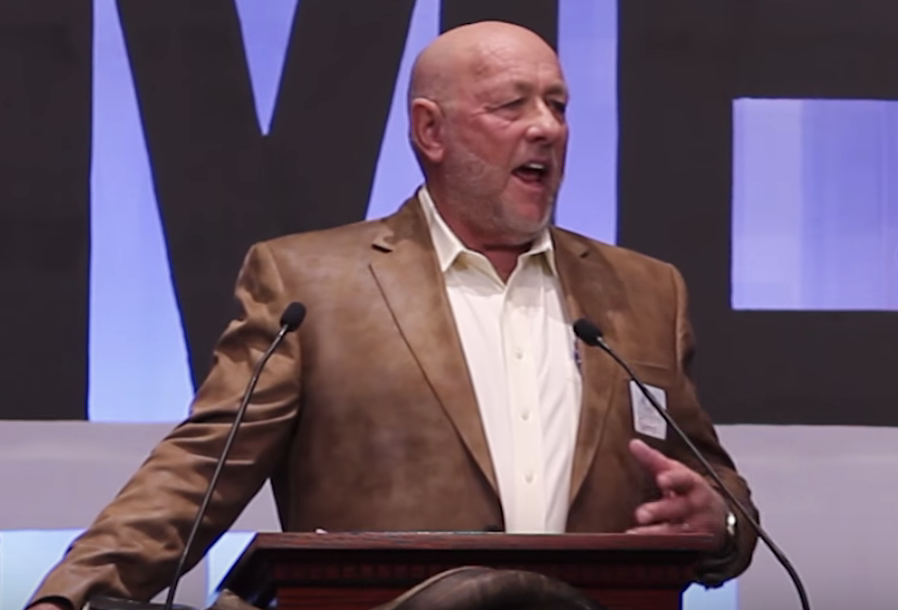 Farris Wilks is one of the billionaire Wilks brothers. Dan and Farris Wilks made their fortune selling their hydraulic fracking business, Frac Tech, for $3.5 billion to the Singapore government in 2011. According to Forbes, Farris Wilks and his brother are each worth $1.4 billion as of December 2017. [1]

The Wilks brothers have been described as “the Koch brothers of the Christian right” for their funding of anti-abortion and anti-LGBT groups. In addition to a variety of groups on the Religious Right, the brothers have funded organizations associated with the Koch brothers’ political network such as the American Legislative Exchange Council (ALEC) and the State Policy Network (SPN). Farris Wilks runs The Thirteen Foundation, which has been described as “one of the biggest and quietest anti-abortion donors in the United States.” [2], [3], [4]

“The Wilks brothers worry that America’s declining morals will especially hurt the younger generation, so they’re using the riches that the Lord has blessed them with to back specific goals,” the Christian Broadcasting Networks’ David Brody reported from an event run by “Christian-Nation extremist“ David Lane in 2013. Farris Wilks said they want to “bring the Bible back into the school and start teaching our kids at a younger age and focus on the younger generation.” [5], [6]

In 2011, Farris and wife Jo Ann each contributed $50 million to help found The Thirteen Foundation. According to The American Prospect, the foundation then gave gifts that “amount to a massive infusion of funds into some of the most aggressive right-wing organizations that are fighting legal equality for LGBT people, access to contraception and abortion services for women, and promoting the Tea Party’s vision of a federal government that is constitutionally forbidden from protecting American workers, consumers, and communities by regulating corporate behavior.” [7]

Some of those funded included American Majority, the Franklin Center, the Heritage Foundation, and the SPN, all part of the Koch brothers’ political network. [8]

Farris Wilks is a pastor for the Assembly of Yahveh 7th Day Church near Cisco, Texas. The church was founded by his parents, Voy and Myrtle, in 1947. The church holds that the Bible is “true and correct in every scientific and historical detail” and that “homosexuality is a serious crime.” Abortion is also a serious crime, “It is murder” including cases of pregnancy from rape or incest, Reuters reported. [9], [10], [11]

The Wilks family made headlines when they gave $15 million to back the 2016 presidential bid by Ted Cruz, and reportedly set up a private fundraising gathering for Cruz a  Farris Wilks’ ranch. The brothers are also among the largest landowners in Montana, the Billings Gazette reported in 2014. [11], [19], [12]

The Wilks Brothers and PragerU

Dan and Farris Wilks are two of the largest funders of PragerU (AKA “Prager University”). Farris’ Thirteen Foundation gave $1 million to the foundation in 2015, while Wilks has given at least $120,000 through the Heavenly Fathers Foundation, according to publicly available 990 forms reviewed by DeSmog. [13]

PragerU, which is not an accredited academic institution, was created by conservative radio talk show host Dennis Prager who has “historically fought against what he describes as ‘liberal’ evils—marriage equality, feminism, and multiculturalism.” According to its 2014 annual report, PragerU was advancing with the specific goal of targeting middle school and high school children. [13]

Dennis Prager has called campus rape a “gargantuan lie to get votes” and “nonsense” promoted by the “feminist left.” [15]

“If [God] wants the polar caps to remain in place, then he will leave them there,” Wilks said, according to sermons reviewed by Reuters. [11]

“We support (Cruz) because he believes in the morality of the free market, in keeping our country safe, and in the right of the unborn not to be killed in their mother’s womb,” Farris Wilks said in an email to Reuters. [11]

Farris Wilks spoke at a Pastors and Pews event, as reported by Crooks and Liars: [8]

“I just think we need to make people aware, and bring the Bible back into the school and start teaching our kids at a younger age and focus on the younger generation,” Wilks said in an interview with CBN at the Pastors and Pews event.

“They are being taught the other ideas — the gay agenda every day out in the world. So we have to stand up and explain to them that it’s not real and it’s not proper; it’s not right,” he added. [16]

Right Wing Watch, a project of People For the American Way (PFAW), reported number of statements Farris Wilks made in a July 2, 2013 sermon. [17]

Reading scripture referring to God’s destruction of Sodom and Gomorrah, Wilks described what he said was punishment for “base and demented” sexual practices, the tolerance of which in America “could bring about the end of our nation.” He suggested that the acceptance of same-sex couples would lead to the acceptance and promotion of bestiality. [17]

“I do believe we live in a nation that will start to vomit some of its people out,” he warned, later adding: [17]

“I fear that that is where we are as a nation. We have been in the blessed part of our nation, but I think we’re coming to the point now…we’re going to reap what we have sown, and what we have sown has not been good…what it says here, that the earth lies polluted under its inhabitants. Think of all the murder that has happened in this country….all the babies that have been murdered…think of all the perversions in the realm of sexual perversion of all kinds…all the breaking of Yahweh’s covenant….and so you recognize that at some point Yahweh’s going to say it’s time to wrap up… it’s time to move on to a kingdom of people that want to serve me, that want to be redeemed, that want salvation…we have to draw some lines in the sand for ourselves….”

With reference to environmentalism, he suggested it is futile for us to save animals ore the ice caps: [17]

“We didn’t create the Earth so how can we save it?” When you realize that Yahweh is in control, “it’s much simpler,” he said. “You can turn over some of those responsibilities to him.” Maybe the melting of polar ice is us “getting a little scorched here” as a message from God. [17]

Later that summer, he described the fight against the gay pride movement:

“What we’re fighting against today is not a sexual revolution particular to our own enlightened age, but it’s a return to pre-Christian pagan sexual immorality or perversion.” [17]

He then went on to portray homosexuals as child predators (emphasis added):

The Washington Post reported that Dan and Farris Wilks were behind a private gathering to rally support behind Ted Cruz’s presidential bid. At the event, Cruz met with 300 prominent faith leaders on the private ranch of Farris Wilks. [19]

During the two-day gathering, participants taped video endorsements for the bid. Mike Gonzalez, who leads the South Carolina Pastors Alliance, said the event included “many of the most prominent spiritual influencers in the country.” Attendees included prominent televangelists John Hagee, as well as James Dobson, founder of Focus on Family. [19]

As reported at CNN and other news sources, the Wilks brothers donated $15 million to support Senator Ted Cruz, setting the record at the time for the largest donation in the 2016 presidential campaign. The donation went to Keep the Promise, a super PAC supporting Cruz. [18]

“Our country was founded on the idea that our rights come from the Creator, not the government. I’m afraid we’re losing that,” Farris Wilks said in a statement to CNN. “Unless we elect a principled conservative leader ready to stand up for our values, we’ll look back on what once was the land of opportunity and pass on a less prosperous nation to our children and grandchildren. That’s why we need Ted Cruz.” [18]

Speaking with Reuters, Farris Wilks said, “We support (Cruz) because he believes in the morality of the free market, in keeping our country safe, and in the right of the unborn not to be killed in their mother’s womb,” Farris Wilks said in an email to Reuters. [11]

According to Rewire, Dan and Farris Wilks helped push a bill referred to “Denton Fracking Ban,” that would actually ban bans on fracking. Based on public records reviewed by Rewire, the Wilks brothers and their wives made more than $800,000 in Texas campaign contributions. [20]

The Denton Fracking Ban, HB 40, would prevent municipalities in Texas from regulating oil and gas activity. [20]

“Every single legislator who received money from the Wilkses in 2014 voted ‘yes’ for the bill. And Gov. Abbott, who signed it into law, took in over $30,000 from the brothers last year,” Rewire noted. [20]

“Here you have the crux of democracy in Denton, Texas, where people got together and voted on what they wanted,” Coleman told Rewire in a phone interview. “And now the same industry that is saying that the federal government can’t regulate them, is saying that, no, even on the local level, they can’t regulate them because they don’t want any regulation at all.” [20]

Farris Wilks does not appear to regularly publish articles or books. Publications will be added here by DeSmog upon further investigation.