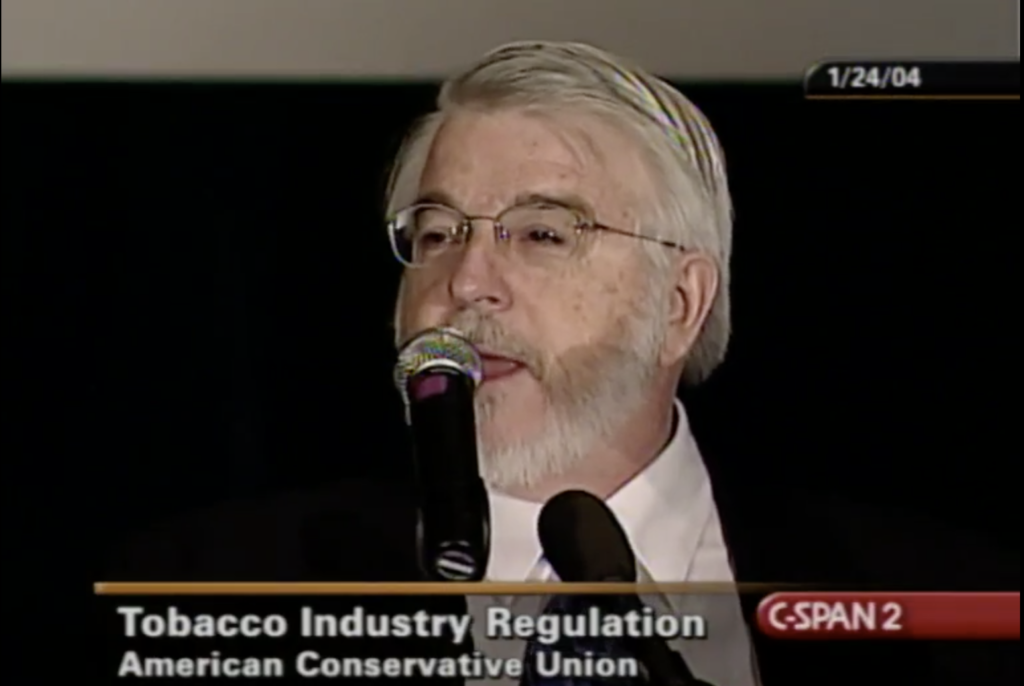 Fred L. Smith is the founder of the Competitive Enterprise Institute (CEI). He served as CEI‘s President from 1984 until 2013, later working as the Director of CEI‘s Center for Advancing Capitalism. [1]

Smith’s former positions include Director of Government Relations for the Council for a Competitive Economy, senior economist for the Association of American Railroads, and Senior Policy Analyst at the EPA. He is a Board member at CEI as well as the American Conservative Union (ACU), and the American Council on Science and Health (ACSH). He is a member of the Foundation for Economic Education’s Faculty Network. [1]

Smith is a self-described “knee-jerk-liberal”-turned-free-market-conservative. Smith founded the Competitive Enterprise Institute to hit “the proper targets—The hearts and minds of Americans,” in the words of a 1995 National Journal article. The article listed CEI alongside organizations such as Citizens for a Sound Economy (CSE), the Institute for Justice, the Progress & Freedom Foundation, and the Alexis de Tocqueville Institution, “unabashedly conservative or libertarian” think tanks that often receive contributions from business interests with a stake in the issues they are researching. [21]

Public tax documents also show that ExxonMobil has contributed over $1.5 million to CEI. More than $5 million comes from the secretive DonorsTrust (DT) and $1 million from its sister organization, Donors Capital Fund (DCF). Together, DT and DCF have been described as the “dark money ATM” of the Conservative movement. [3], [4]

Fred L. Smith and the Competitive Enterprise Institute have a history of fighting against tobacco regulation. For example, at the 2004  American Conservative Union (ACU) annual conference, Smith said on a panel regarding tobacco regulation that one should consider the “threats these regulations pose to individual liberty.” He described smoking itself as a “symbol of freedom.” [10]

Smith has regularly requested financial aid from tobacco companies like Philip Morris and The Tobacco Institute, according to records from the Truth Tobacco Industry Documents archive. For example, in a October 2000 memo, Fred L. Smith thanked Ms. Maura Payne of RJ Reynolds Tobacco for “RJR‘s continued support”, adding “your personal involvement has meant a lot to our battles over the last 16 years.” The letter concludes, “I know you have contributed between $20,000 to $50,000 over the years.” [22]

In an October 1994 memo, Smith thanked Philip Morris for a contribution of $150,000. “Philip Morris’s contribution will enable CEI to expand our efforts in well-established areas as our Human Cost of Regulation program and other regulatory reform projects,” the memo read. [23]

In September 1995, Smith requested an additional $200,000 contribution from Phillip Morris. “I believe our past accomplishments and plans for the future merit such a substantial contribution,” Smith wrote in his letter to Thomas J. Borelli. [24]

In testimony regarding the U.S. Climate Action Partnership, a group of individuals and businesses proposing government actions to reduce greenhouse emissions, Smith described carbon use as a “theoretical threat,” and pointed to “alarmist views” on global warming: [5]

“There are major costs, we’ve heard, of rationing energy. Yet there are no obvious gains, even if one accepts the alarmist views of global warming. No one is proposing any carbon use curtailment that would do anything meaningful to reduce the theoretical threat of carbon use. The current proposals are all pain, no gain,” said Smith. [5]

In a discussion on “greed,” as proposed by Michael Douglas’ character Gordon Gekko on Wall Street who said “greed is good,” Smith said: [6]

“Greed is just a pejorative term for the human condition of self-interest. And it’s the only thing that drives mankind to make the world better for all,” said Smith. [6]

Smith spoke at a meeting of the Council for National Policy (CNP) in Henderson NV on February 11, 2006. His talk at CNP was titled “Ego-Paganism – Eco- Socialism Severe Threats to Americas Future” [7]

Speaking at the 2004 The American Conservative Union (ACU) annual conference, Smith spoke of research on the risks of secondhand smoke:

“[T]he risk associated with secondhand smoke were in the noise. Were trivial,” he said. [10]

Fred L. Smith was one of several witnesses to testify on the findings of the U.S. Climate Action Partnership report, which would call for reductions in greenhouse gases. [5]

Smith said that “the proposal to create a carbon cartel advanced by the Climate Action Partnership is one of those policy risks, a serious one I believe.” He adds, “America normally puts people in jail who create anti-consumer cartels.” [5]

“The Climate Action Partnership, an alliance of environmental and business groups, has been promoted as an example of responsible leaders seeking to protect our planet. Perhaps. But when businessmen seek, politically, to achieve what they cannot achieve in the marketplace, we should all be a bit skeptical,” he said. [5]

Smith cites the Climate Action Partnership as an example of “economic interest groups cloaking their search for monopoly profits under some convenient moral cause.” [5]

“There are major costs, we’ve heard, of rationing energy. Yet there are no obvious gains, even if one accepts the alarmist views of global warming. No one is proposing any carbon use curtailment that would do anything meaningful to reduce the theoretical threat of carbon use. The current proposals are all pain, no gain,” said Smith. [5]

In a 2006 CEI document, Smith speaks of a “New Environmental Gospel” that “preaches that property rights are evil and that the power of the state is benevolent.” [8]

According to the footnotes, Smith initially presented portions of his paper at a meeting of the Council for National Policy (CNP) in Henderson NV on February 11, 2006. His talk at CNP was titled “Ego-Paganism – Eco- Socialism Severe Threats to Americas Future.” [7]

In his remarks, Smith said conservatives should engage in the environmental debate and that “while we have a deep and important moral responsibility to care for God’s creation, that this responsibility should be by extending the conservative institutions of liberty (private property, the rule of law, private action) – not by joining the collectivist environmental parade.” [7]

Smith added, “Today, we’re becoming increasingly aware that the Endangered Species Act endangers species, that Superfund enriches lawyers while cleansing only taxpayer’s wallets. The Clean Air and Clean Water Acts restrict growth and control land use but do little to make America more healthful, that EPA increasingly alarms rather than informs the American citizenry. And these problems are becoming increasingly evident.” [7]

The American Conservative Union (ACU) held its annual conference, which included two panels that looked at the issues of the FDA‘s regulation of tobacco and global climate change, reported C-SPAN video. [9]

John Calfee, resident scholar of the American Enterprise Institute declared that it would be “an absolutely terrible idea to pass legislation supported by Phillip Morris and others to put the FDA in charge of the tobacco market.” He introduces Smith, saying he will be talking about “myths that need debunking.”  (Smith’s presentation starts shortly after 18:40. [10]

“Should the nanny state regulate tobacco? No. Of course not,” Smith declared. He then went on to list out the supposed “threats these regulations pose to individual liberty,” while portraying smoking itself as a “symbol of freedom.” He also admits that “the hazards of smoking, we all know are real and they’re there.” [10]

“Children’s defense fund strategies are immoral,” Smith added. “The youth of America want to live in a free world. […] the nanny regulators should not regulate smoking, or anything else really. […] We should not be regulating advertising for these products.” [10]

In the Q&A session, responding to a question on alcohol and regulation in comparison with tobacco, Smith said: “While one should discuss the negative aspects of one’s products—the facts that alcohol can be damaging to some individuals—one should also be allowed to put in the positive effects; that moderate consumption of alcohol […] is healthy. It’s health-enhancing. There’s a pro-con, risk-risk analysis.” [28:10] [10]

Citing a study by an “emeritus epidemiological professor at Harvard,” Smith says that “the risk associated with secondhand smoke were in the noise. Were trivial.” [34:50] [10]

Talking about “sound science,” pointing to groups like Steve Milloy’s JunkScience, as well as work by AEI. [10]

Smith wrote a joint letter with Marlo Lewis to President Bush, discouraging him from supporting the McCain-Lieberman bill as well as opposing mandatory CO2 reductions as part of the Kyoto agreement. [11]

Fred L. Smith spoke at a program hosted by the Atlas Economic Research Foundation (AERF — now the Atlas Network) titled “Poverty and the Environment – Global Lessons, Local Solutions” in Orlando, Florida. According to the AERF description, smith presented a briefing on his experience during the Kyoto Global Warming Summit. He presented the slogan, “A world starved of energy will be a world of starving people.” [12]

Smith was a speaker at a conference hosted by the Atlas Economic Research Foundation (AERF) on “Poverty and the Environment.” Beisner’s talk was titled “Lessons From Kyoto: Strategic Leadership.” [26]

According to the conference event description, “This Atlas Economic Research Foundation conference will bring together scholars and government officials from the Americas, to discuss the interrelationships between poverty, human health and environmental quality. For two days, speakers, panelists and commentators will examine deep-rooted problems … evaluate how nations have sought to solve them with central planning and governmental mandates … explore market-oriented alternatives to command-and-control approaches … and address the pros and cons of international treaties and protocols that often involve one-size-fits- all ‘solutions’ to narrowly defined environmental problems and concerns.” [26]

The event, hosted in Orlando, Florida, included a tour of Disney World’s waste management facility, followed by speaker discussions on “global treaties and local solutions in the areas of packaging, solid wastes, wastewater treatment, air quality and related issues.” The full list of speakers was as follows: [26]

Fred L. Smith flies to the UK with climate science contrarian Patrick Michaels to attend a conference in London organised by the Institute of Economic Affairs. The conference is thought to be the first event in the UK to actively promote climate science denial.

Smith is co-author with Michael S. Greve of Environmental Politics: Public Costs, Private Rewards (1992). In a September 1992 fundraising letter, Greve petitions The Tobacco Institute for financial support for the Center for Individual Rights. [13]

In the letter, Greve points out to Martin J. Gleason, Director of Issues Management of The Tobacco Institute, that “You may find Chapter 8, which deals in part with the regulation of tobacco exports, of particular interest.” [13]

Fred Smith is quoted in a Policy Backgrounder fighting against CAFE (Corporate Average Fuel Economy) standards, as part of an executive report collection in the Truth Tobacco Industry Documents archive. [14]

Smith argues that increases in traffic fatalities can be attributed to fuel economy standards: [14]

“In raising the CAFE standard to 40 mpg by the end of the decade, the Bryan bill would more than double the number of annual CAFE-caused fatalities, leading to thousands of unnecessary auto deaths without any discernible benefit in return,” Smith concludes. [14]

Smith’s profile at ACSH notes that he has regularly appeared on television and radio programs to discuss regulation and policy, including CNN‘s Crossfire, PBS s News Hour with Jim Lehrer and Now with Bill Moyers, ABC‘s 20/20 and This Week, NPR‘s Talk of the Nation and The Diane Rehm Show, and The G. Gordon Liddy Show, among others. [19]

His ACSH profile also nots that he has written in a range of newspapers and magazines including The Wall Street Journal, National Review, Economic Affairs, and the Washington Times. [19]

He was co-editor of Environmental Politics: Public Costs, Private Rewards. He also contributed chapters to several books including: [20]