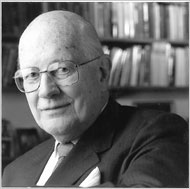 Dr. Frederick Seitz passed away on March 2, 2008. He was the former head of Rockefeller University, a former head of the National Academy of Sciences and the principal scientific advisor to the R.J. Reynolds medical research program. He was a co-founder of the George C. Marshall Institute, and later Chairman Emeritus of the Board. [1]

Seitz was the former principal scientific advisor to the RJ Reynolds medical research program. A May 2006 Vanity Fair article by Mark Hertsgaard outlines Seitz’s central role in a $45 million “medical research” program in the 1970s and 1980s for tobacco-giant RJ Reynolds: [2]

“’They didn’t want us looking at the health effects of cigarette smoking,’ says Seitz, who is now 94— but it nevertheless served the tobacco industry’s purposes. throughout those years, the industry frequently ran ads in newspapers and magazines citing its multi-million-dollar research program as proof of its commitment to science—and arguing that the evidence on the health effects of smoking was mixed,” Hertsgaard reported in the article.

DeSmog uncovered a 1989 internal memo from tobacco company Philip Morris explaining that Seitz “is quite elderly and not sufficiently rational to offer advice”: [16]

“I spoke with Bill Hobbs [RJ Reynolds] about arranging an appointment for you with Dr. Fred Seitz, former head of Rockerfeller University and the principal scientific advisor to the RJ Reynolds medical research program. Bill told me that Dr. Seitz is quite elderly and not sufficiently rational to offer advice.” [16]

Seitz was quoted in a April 2007 interview with Frontline:

“If I was asked to bet – and this is recognizing that the answer isn’t really known scientifically – I would say it’s unlikely that we face serious danger from global warming.” [3]

Seitz was quoted by the Heartland Institute’s newsletter/blog “The Heartlander”:

“[T]he scientific facts indicate that all the temperature changes observed in the last 100 years were largely natural changes and were not caused by carbon dioxide produced in human activities.” [4]

There are more than 800 documents mentioning Fred Seitz in a search of the Truth Tobacco Industry Documents library.

Seitz was an organizer of the “Oregon Petition” along with fellow skeptic Art Robinson. The Oregon Petition has been cited by climate change deniers as proof that there is no scientific consensus, however they fail to note the controversy surrounding the petition itself. [5], [6]

In April 1998, Robinson’s Oregon Institute, along with the Exxon-backed George C. Marshall Institute, co-published the infamous “Oregon Petition” claiming to have collected 17,000 signatories to a document arguing against the realities of global warming. [17]

The petition and the documents included were all made to look like official papers from the prestigious National Academy of Science. They weren’t, and this attempt to mislead has been well-documented.

Along with the petition there was a cover letter from Seitz. Also attached to the petition was a “research paper” titled: Environmental Effects of Increased Atmospheric Carbon Dioxide. The paper was made to mimic what a research paper would look like in the National Academy’s prestigious Proceedings of the National Academy journal. The authors of the paper were Robinson, Sallie Baliunas, Willie Soon (both oil-backed scientists) and Robinson’s son Zachary. [18], [19]

The petition was so misleading that the National Academy issued a news release stating:

“The petition project was a deliberate attempt to mislead scientists and to rally them in an attempt to undermine support for the Kyoto Protocol. The petition was not based on a review of the science of global climate change, nor were its signers experts in the field of climate science.” [7]

Seitz was actually the president of the National Academy of Sciences from 1962 to 1965, but after the incident regarding the Oregon Petition, the Academy tried to distance themselves from any association with Dr. Frederick Seitz. [20]

Frederick Seitz served as an expert witness on behalf of Western Fuels Association in St. Paul, Minnesota to determine the environmental cost of coal burning by state power plants. [13]

Seitz is listed as a signatory to the Leipzig Declaration, a 1995 open letter designed and spread by SEPP in conjunction with a group called the European Academy of Environmental Affairs. The declaration stated: “there does not exist today a general scientific consensus about the importance of greenhouse warming from rising levels of carbon dioxide.” [8]

According to SourceWatch, when a Danish journalist attempted to contact the 33 European scientists listed on the petition, 12 denied signing the petition and some had not even heard of the Leipzig Declaration. Of those that did admit to signing the letter, one was a doctor and another was an expert on flying insects. The declaration was then revised and many names were removed.

Seitz has published numerous papers in the area of phsyics, including the book The Modern Theory of Solids (1940), which was considered influential in solid state physics. His second volume, The Physics of Metals, was published in 1943.

A search of Google Scholar lists one peer-reviewed paper by Seitz on the subject of climate change, published in the journal Energy in 1991. The journal describes its subject areas as “energy engineering and research.” [22], [21]