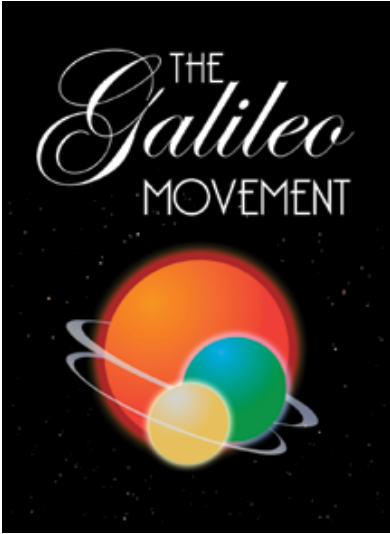 The Galileo Movement is an Australian organisation, registered as a private company, which campaigns against legislation to put a price on carbon dioxide emissions.

The group was founded in February 2011 by two Queensland-based retired businessmen Case Smith and John Smeed, who had previously worked together to successfully arrange a tour of Australia by British sceptic Lord Christopher Monckton. [1], [2]

The Galileo Movement describes its “ultimate aim” as “to use pressure from voters and non-voters to persuade our politicians of all parties that restricting Australia’s production of carbon dioxide is futile, wasteful and dangerous,” according to the group’s website. [2]

The group claims carbon dioxide emissions are not dangerous and that the United Nations Intergovernmental Panel on Climate Change is corrupt. They also oppose wind power, proposing to “Stop immediately all wind turbine installations until significantly important natural beauty areas are identified and off-limits to industrial wind farms” as part of its draft “Climate and Science Policy & Affordable Energy Policy.” [3], [4], [5]

The Galileo Movement’s patron is radio personality Alan Jones, who has claimed that climate change science is “witchcraft” and a “hoax.” Mr Jones used his radio show to announce the launch of the group. He also conducted a series of interviews which included the project leader Malcolm Roberts and Massachusetts Institute of Technology Professor of meteorology Richard Lindzen. [2], [6], [7], [8]

According to Scientific American, “Close examination of the Galileo Movement’s arguments shows that the effort is recycling many of the same straw man arguments and distortions about the science that other groups have previously employed to scuttle a cap-and-trade bill in the U.S. Congress last year, a stricter emissions trading scheme in New Zealand three years ago and other regional and national efforts to reduce greenhouse gas emissions.” [9]

The Galileo Movement’s website includes numerous statements denying that human emissions of carbon dioxide from burning fossil fuels will be detrimental to the climate, or that they have the ability to cause climate change. “Nature alone controls the air’s CO2 levels,” claims the website. [10]

The push to restrict human production of carbon dioxide is deadly with negative life-changing implications. Our campaign is serious. We aim to replace the fear and guilt heaped on us by reconnecting with life’s inherent joy. [2]

The Movement’s “Fact Sheet” on the “Science” claims that there has been “no net increase since 1958” in global atmospheric temperatures. [3]

“Ground-based temperatures are known to be corrupted. They exaggerate modest cyclic warming and in places fabricate warming,” the document adds. [3]

The Galileo Movement’s points very closely match those proposed by Pauline Hanson’s One Nation of which Malcolm Roberts is also the “One Nation Senator for Western Australia.” According to a content check via Copyscape, the One Nation page pulls over half of its wording for the “solutions” under its “Climate Change Agenda” directly from the Galileo Movement’s “Draft Climate and Science Policy & Affordable Energy Policy”: [11], [12], [5], [13]

The Galileo Movement is a private company and under Australian law is not required to disclose its funding. Galileo Movement project leader Malcolm Roberts says the group is staffed entirely by volunteers. [2]

The group does ask for donations through its website, which says it has engaged the services of a Sydney-based PR company, Jackson Wells. Independent media outlet Crikey reported that Jackson Wells associate Bob Lawrence had been assigned to work with the group. According to Crikey, “Jackson Wells’ job is apparently to get Galileo into the mainstream media, a task that so far has proven difficult.” [14]

The Galileo Movement launched a fundraising campaign through Indiegogo on August 5 with the goal of raising $50,000 (archived here). By the time the campaign closed on October 4, only one donation had been made through the site, raising a total of only $25. [15]

Despite this setback, Moore proceeded to tour with events in Sydney, Melbourne, Canberra, Perth, Hobart, Brisbane and the Sunshine Coast. He also gained newspaper coverage in The Land and The Australian. [16], [17]

DeSmog’s Graham Readfearn noted that media coverage by The Australian had repeated claims made by the Galileo Movement that Moore had been a crew member of the Greenpeace Rainbow Warrior boat at the time it was bombed by the French government in July 1985. Greenpeace representatives confirmed that Moore was not a member of the vessel’s crew, and had not been on the boat when the bombs exploded, but was rather on the New Zealand mainland for a Greenpeace board meeting scheduled around that time. [15], [18]

Galileo Movement co-founder John Smeed successfully proposed a motion to the Liberal National Party‘s state convention in Queensland that the party “opposes laws and/or regulations being made by Local, State, and Federal governments that enact the policy objectives of United Nations Agenda 21.” To support his proposal, Smeed wrote: [19]

“Agenda 21 was accepted and subsequently promoted by most Western governments of all political persuasions. While understandably consistent with the policies of socialist (particularly Fabian) controlled governments, it is logically incomprehensible that any politically conservative government could support and promote a well documented scheme that sets objectives to achieve abolition of property rights, redistribution of wealth, and implementation of global governance.” [19]

News Corp. Australia political columnist and climate science denier Andrew Bolt asked that his name be removed from a list of advisors to the Galileo Movement after engaging in an email exchange with project leader Malcolm Roberts. [20]

Bolt asked The Galileo Movement for clarification after Roberts was quoted in a Sydney Morning Herald (SMH) newspaper report saying that climate change science had been captured by ”some of the major banking families in the world.” SMH columnist Mike Carlton wrote this was “code for the Great Jewish Conspiracy.” [21], [22]

In an email to Roberts, Bolt wrote: “Two of the three most prominent and current banking families you’ve mentioned are Jewish, and the third is sometimes falsely assumed to be. Yes, this smacks too much of the Jewish world conspiracy theorising I’ve always loathed.” [23]

In a statement, The Galileo Movement co-founders John Smeed and Case Smit denied the organisation was “anti-Semitic.” Smeed recorded a video message alongside his wife Suzi, a Holocaust survivor who said she had been deeply hurt by the accusations. [24], [25]

Alan Jones announced the launch of The Galileo Movement on his radio show as part of an interview with climate change denier Richard Lindzen. Audio below. [8]

According to the Australian Business Register (ABR), The Galileo Movement began activity on February 23, 2011. [1]

According to the Galileo Movement’s “Donation” page, cheques should be sent to the following address: [27]