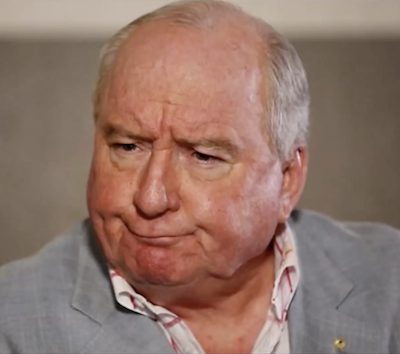 Alan B. Jones is a radio personality, sometimes referred to as a “shock jock.” He is described as “Australia’s most popular talkback presenter” at 2GB Radio in Australia where he hosts the Alan Jones Breakfast Show. [3], [4]

Jones is the “patron” of the Galileo Movement, an Australian organization, registered as a private company, dedicated to campaigning against legislation to put a price on carbon dioxide emissions. The Galileo Movement describes its “ultimate aim” as “to use pressure from voters and non-voters to persuade our politicians of all parties that restricting Australia’s production of carbon dioxide is futile, wasteful and dangerous.” [5], [6] Jones is also a host and guest on Sky News in Australia.

Jones will often invite climate science deniers onto his radio and television shows.

In 2012, The Australian described Jones as one of the most prominent opponents of the carbon tax. He coined the term “JuLIAR” in relation to Julia Gillard, claiming that she had misled Australians about its introduction. [7]

Before starting work as a radio host for 2UE in 1985, Jones ran for the State Parliament in 1978. After failing to win, he worked as a speechwriter for John Mason, NSW Opposition leader, and was later recruited as a speechwriter for Australia’s Liberal Prime Minister Malcolm Fraser. While working at 2UE, Jones and the station faced multiple charges for contempt of court. A February 2000 investigation by the Australian Broadcasting Authority (ABA) found that Jones and radio host John Laws breached the radio code and the Broadcasting Act 95 times. Jones started airing on 2GB on March 4, 2002. [2]

Jones was involved in the 1999 cash for comment affair, as revealed by reporters from the public broadcaster’s Media Watch TV program. They found that 2UE talk show hosts John Laws and Jones had been paid for favorable comments for companies without disclosing the arrangement to listeners. [3]

Jones and the radio stations he works with have repeatedly faced defamation and contempt charges due to statements Jones made on air:

Jones was ordered to pay $55,000 in damages for the defamation of David Parker, a former councilor of the NSW Motorists’ organization. Parker claimed the defamation took place during the NRMA election campaign in October 1986. 2UE was also ordered by court to pay $80,000. [2]

One month after Jones renewed his contract with 2UE, both Jones and 2UE were found in contempt of court after the criminal trial of former police officer John Killen was aborted following Jones’ interview with a former Drug Enforcement Squad officer. [2]

Don Mackay, President of the NRMA, sued both Jones and 2UE alleging Jones had made a number of false imputations against him. [2]

Dr. Eric Yeung, the managing director of the Manly Pacific Hotel, also sued Jones and 2UE. Yeung claimed that a broadcast by Jones had falsely suggested the was a heroin trafficker, that he had used the hotel for such, and that he was party to a conspiracy to frame Mr Kalajzich and murder Mrs Kalajzich. [2]

After Jones labelled him as “biased” during an interview with former NRL chief executive Neil Whittaker, rugby league referee Bill Harrigan was awarded $90,000 in damages for defamation by Jones. [2]

Following an investigation by The Australian Broadcasting Authority (ABA) regarding 2UE cash for comment allegations, its report found that Jones and John Laws had breached the Broadcasting Act 95 times. ABA imposed additional conditions on 2UE‘s license. During his defense to the ABA, Jones claimed that he did not realize that his contract contained provisions related to on-air conduct. [2]

Detective Chief Inspector Deborah Wallace, a NSW police officer, sued Jones and 2UE for defamation. Jones and the radio company settled outside of court for an undisclosed amount. [8]

The ABA found that Alan Jones had breached radio code of practice in broadcasts before the 2005 Cronulla riots. The broadcasting watchdog found that Jones’ statements made between December 5 and December 9 were “likely to encourage violence or brutality and to vilify people of Lebanese and Middle-Eastern backgrounds on the basis of ethnicity.” [9]

Media Watch discussed the comments, and the ABA finding. Video below: [10]

In a 2010 decision, the NSW Supreme Court awarded costs to Australian Olympic Committee chief John Coates who had submitted a defamation case against Alan Jones and his employer. Jones had most recently appealed the ruling in 2008. Harbour Radio (owner of 2GB) and Jones faced a combined legal bill of roughly $1.7 million, The Daily Telegraph reported. [11]

Former Queensland Premier Campbell Newman and Deputy Premier Jeff Seeney sued Jones over comments he had made alleging Newman had lied about expanding the Acland coal mine in southern Queensland. [12]

Jones has repeatedly referred to global warming as a “hoax.” For example, on Twitter: [14]

Alan Jones has referred to climate change science as “propaganda.” Speaking to a group of about 150 people outside of the Victorian Parliament, Jones declared: [15]

“The notion of global warming is a hoax. This is witchcraft. Commonsense will tell you it’s rubbish; 97 per cent of all carbon dioxide occurs naturally […] 3 per cent around the world is created by human beings.”

In an interview with the Institute of Public Affairs’ Jennifer Marohasy, Jones declared: [23]

“The tentacles of the global warming hoax are everywhere.”

In an editorial at 2GB radio, Jones claims there was an “admission of incompetence from the man-made global warming, climate change cheer squad” regarding a global warming “pause.” [16], [17]

“You’d imagine scientists finally facing this reality would reassess all their assumptions about climate change – including the assumption man-made CO2, which continues to rise, is driving global warming

“But not this mob

“No, they blame their dodgy predictions on ‘natural variability’ (things like El Ninos and La Ninas) and ‘unforeseen events’ (volcanic eruptions),” Jones wrote.

With reference to EPA Administrator Scott Pruitt’s suggestion of a “red team-blue team” exercise on climate change, Jones concluded: “Hear, hear to that.”

Jones has repeatedly referred to the decarbonization of the economy as a “national economic suicide note.” For example, on Twitter: [18]

Speaking at a Sydney University Liberal Club function, Alan Jones began a tirade against the government, and then went on to say that then Prime Minister Julia Gillard’s father had “died […] of shame”: [19]

“They are indeterminate and compulsive liars. They’ll lie and lie and lie. […] Every person in the caucus of the Labor Party knows that Julia Gillard is a liar. Everybody, I’ll come to that in a moment. The old man recently died a few weeks ago of shame. To think that he had a daughter who told lies every time she stood for parliament.” [19]

After backlash, Jones later apologized for the statement, while dozens of advertisers pulled support from the show. [20], [21]

After complaints, The Australian Communications and Media Authority (ACMA) found that Jones breached radio codes of practice and required him, as part of measures agreed to with 2GB, to undertake training on “factual accuracy and significant viewpoints.“ [22]

Jones interviewed the Institute of Public Affairs’ Jennifer Marohasy, editor of “Climate Change The Facts 2017.” Jones claims that Marohasy had found, through her own “feet on the ground research” that the Bureau of Meteorology had “doctored temperatures.” With reference to the book, Jones describes them as “uncomfortable facts for advocates of the global warming hoax.” [23]

The Institute of Public Affairs is not required to disclose its funders. However, the Sydney Morning Herald reports that about a quarter of IPA‘s $2 million in annual funding comes from corporations with a direct stake in the climate change debate, “not including contributions from its 1000 individual members, some of whom also have a personal interest in climate change.” [25]

Contributors to the book include:

Bjorn Lomborg was a guest on the Alan Jones show to talk about the Paris climate change agreement. [26]

Jones interviewed climate change denier and producer of “Climate Hustle” Marc Morano on his morning show. In the same program, Jones interviewed Greg Evans from the Minerals Council who espoused the benefits of so-called “clean coal.” [28]

After flying over the Great Barrier Reef off of Cairns, Jones claimed the reef was “fine,” later declaring on his radio show that “the global warming alarmists will stop at nothing […] Green groups run a very different agenda. If they can prove there’s an armageddon on the way they’ll get money. They want to talk about climate change and shut down everything.” [29]

The Guardian noted that Jones launched a Great Barrier Reef conservation site despite his assertion that the reef was fine. Speaking with The Guardian Australia, the chief executive of the Climate Council suggested that the conservation group should distance themselves from Jones’ comment. “They need to immediately come out and distance themselves from those comments and make clear what their approach is to climate change and the reef and what their attitudes will be to educating people about the reef – because that’s one of their main aims.” [30]

According to Jones, “Like much associated with the global warming hoax, truth was the casualty.”

“The Barrier Reef’s fine – there are any number of reputable entities who will be looking after it and making sure it continues to be fine and looked after,” he said.

Jones also spoke with the Cairns Post after his flying tour of the reef.

“There are cycles in all of this – the Reef regenerates its­elf,” he said.

“The reality is that northern section was here thousands of years ago and will be for the next thousand.

“It’s like a bushfire, it regenerates itself, it’s part of the natural way of things.”

Climate change denier Christopher Monckton was again a guest on the Alan Jones show, appearing as the Paris climate talks were underway. [31]

“This whole decarbonization of the economy is a national suicide note,” Jones said in his introduction, adding “To anyone with half a brain, this must be unbelievable. […]”

Alan Jones interviewed Lord Christopher Monckton on his breakfast show. According to Monckton, “It would be between 36 and 48 times more expensive to spend money on carbon taxes now than to sit back, enjoy the sunshine, go surfing, and adapt in a focused way to any adverse consequences” from climate change. [32]

Jones made the claim on 2GB radio that “human beings produce 0.001 per cent of carbon dioxide in the atmosphere” and that therefore human-caused climate change was not possible. After numerous complaints, the Australian Communications and Media Authority (ACMA) investigated whether the claims were backed up by evidence. [7]

ACMA said that the licensee of 2GB had “conceded that it was a claim researched by Mr Jones himself and they weren’t able to adduce any evidence supporting that claim.” [7]

ACMA also said that Jones would have to undertake training on “factual accuracy and significant viewpoints” as part of measures agreed with 2GB. The original ACMA ruling said that Jones said on air: [22]

With “New measures applying to all news and current affairs programs”:  [33]

An archive of recent episodes of the Alan Jones Breakfast Show is available at iTunes.