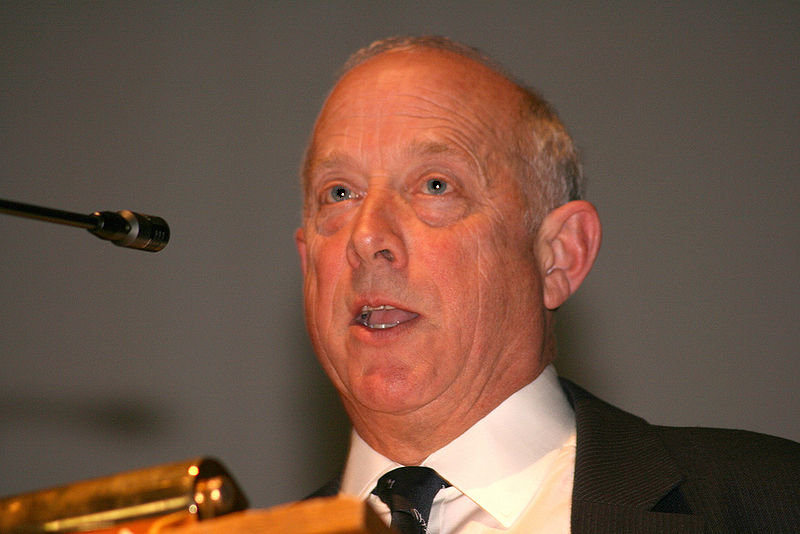 Godfrey Bloom is a former Member of the European Parliament (MEP) for Yorkshire and the Humber, representing the United Kingdom Independence Party (UKIP) between 2004 and 2013. He continued to sit as an independent for the remainder of his term, ending in May 2014. [2], [3]

According to his website, Godfrey Bloom served in the British Army in Germany from 1976, after attending the Royal Military Academy Sandhurst. He went on to work as an investment banker in the City of London and was director of TBO Investments between 1992 and 2004. [4], [5], [3]

Bloom describes himself as a “libertarian author,” having published books on military history and the “Austrian School” of economics, known for their advocacy of free markets and opposition to government intervention. He was briefly President of the Ludwig von Mises Centre – set up in 2017 “to counter the nonsense of mainstream politics and mainstream economics” – before being removed following controversial tweets by Bloom. [4], [6], [7]

Bloom is well-known for his climate science denial, telling the European Parliament in 2009 that global warming is a “sham” created to extract more tax from “ordinary people.” In 2010, he was filmed praising the French secret service for sinking the Greenpeace ship Rainbow Warrior in 1985. Bloom received £3,000 from a shareholding in Shell in 2013, Euractiv revealed. [8], [9], [10]

In 2012, the Guardian revealed Bloom employed Ben Pile as a “climate and environment researcher” for around £2,000 a month, despite having no formal environment remit with UKIP. [11]

Pile has produced a number of anti-wind power campaign videos and commentaries and regularly writes for the website Spiked, who were revealed in December 2018 to have received funding from the Koch brothers. [12], [13], [14]

Bloom gained notoriety in 2013 after striking a reporter outside UKIP’s annual conference, after being questioned about the party’s lack of diversity. He had previously referred to a female audience as “sluts” during a fringe meeting at the conference. The month before, a video emerged of Bloom telling a local meeting that Britain should not be sending aid to “bongo bongo land,” calling aid programmes “treason.” [15], [16]

In an article on the Politics.co.uk website entitled “Here’s the truth – there’s been no global warming since the 1990s,” Bloom quoted the economist Bjorn Lomborg, who has long downplayed the risks associated with climate change: [17]

“There is less than zero evidence of negative consequences of climate change: people are wealthier, healthier, and better protected from nature than at any point in human history – because of wealth, not the climate.” [17]

Speaking in a parliamentary debate, Bloom described global warming as a a “sham” (emphasis added): [8]

“As independent science has actually confirmed, that the globe is actually cooling, and has been cooling since 2002. Broadly flat since 1998. So we’re all talking about something here which isn’t happening. [8]

“I’ve heard time and time again, members here talk of CO2 as a pollutant. A pollutant is a life-giving natural gas. It gives me the impression that some of our members haven’t had the benefit of a formal education. [8]

“The whole thing’s a sham. This bogus hypothesis. This ridiculous nonsense that manmade CO2 is causing global warming. Enough please, before we damage irrevocably the global economy.” [8]

Bloom accused the BBC of silencing climate sceptics on its programmes, saying: [18]

“The BBC has blocked sceptics of climate change for four years now, no debate is allowed on the BBC. It is biased reporting and it is censorship.” [18]

“I absolutely stand by what I said. This is one of the most important subjects since the war. The whole thing has been a complete farce and a cover-up.” [18]

Bloom told the BBC, ahead of the Copenhagen climate conference: [19]

“As far as I am concerned man-made global warming is nothing more than a hypothesis that hasn’t got any basis in fact.” [19]

Bloom’s investment company, TBO Investments, was ordered to pay a retired couple £2m by the High Court, after giving “negligent advice” and “gambling their money on mining and natural resource funds,” The Independent reported. [3]

Bloom wrote a commentary for Politics.co.uk that argued there has been “no global warming since the 1990s,” in response to the release of the first part of the Intergovernmental Panel on Climate Change’s (IPCC) major report on the state of climate science. [17]

In a debate in the European Parliament prior to the Copenhagen international climate negotiations Bloom said that global warming is a “sham.” [8]

The Times reported that Bloom was using his European Parliament staff allowance to pay three assistants who were also employed by his investment company, TBO Investments. [20]