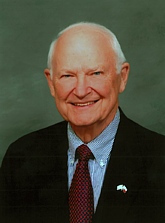 H. Leighton Steward is the President and Chairman of Plants Need CO2, a group founded in 2009 with the mission “to educate the public on the positive effects of additional atmospheric CO2 and help prevent the inadvertent negative impact to human, plant and animal life if we reduce CO2.”

He is the Chairman of the Institute for the Study of Earth and  Man (ISEM) Board of Trustees, and was Vice Chairman of the American oil and gas company Burlington Resources, Inc. until his retirement in 2000.

According to his profile at EOG Resources (formerly Enron Oil and Gas Company) where he is a director, Steward has extensive experience in the oil and gas exploration and production industry and has also worked with The Louisiana Land and Exploration Company as President, Chief Operating Officer and, Chairman of the Board and Chief Executive Officer from 1989 until its acquisition by Burlington Resources Inc. in 1997. [3]

“[C]arbon dioxide (CO2) is not a major contributor to current global warming nor to Earth’s paleoclimates.” [4]

“More CO2 is needed to bolster plant life, which turns the gas into oxygen while also providing food.”

“Many, many reputable scientists believe that natural factors overpower the current influence of CO2 on global warming.”

“CO2 is a great airborne fertilizer, which, as its concentrations rise, causes additional plant growth and causes plants to need less water.”

“The warning level of CO2 in submarines isn’t reached until the atmosphere has 8,000 parts per million of CO2.” [5]

“Humans have been fertilizing Earth’s greenery worldwide, but not with nitrogen-based fertilizer that runs into the rivers and oceans with very negative effects. We have been raising the level of CO2, which has no negative effect on any plant or animal life.” [21]

H. Leighton Steward was a signatory of a petition (PDF) organized by Richard Lindzen of the Cato Institute urging President Donald Trump to pull the United States out of the United Nations international convention on climate change (UNFCCC). [35]

“In just a few weeks, more than 300 eminent scientists and other qualified individuals from around the world have signed the petition below,” Lindzen wrote in the letter. [35]

DeSmog investigated the list, and found that only a small handful of the signatories could be considered “even remotely ‘qualified’ or ‘eminent’ — but not in the field of climate science.” The list included individuals “interested in climate,” and one signatory who only identified as an “emailer who wished to sign the petition” while some signers provided no affiliation or address whatsoever. [36]

Marc Morano’s Climate Hustle was released in U.S. theatres on May 2, 2016. Bill Nye described it as  “not in our national interest and the world’s interest.” [26]

The film was produced by the Committee for Constructive Tomorrow (CFACT) and CDRCommunications. As noted at Desmog’s project, ClimateHustler.org,  CFACT has received funding from ExxonMobil, Chevron, as well as hundreds of thousands of dollars from foundations associated with Richard Mellon Scaife. CFACT has also received at least $7.8 million in “dark money” through DonorsTrust and Donors Capital Fund. [27], [28]

CDR Communications was behind the 2010 video by the Cornwall Alliance titled Resisting the Green Dragon, which claimed environmentalism was a “false religion” and a “global government” power grab. Chris Rogers of CDR Communictions is also chairman of The James Partnership, the umbrella arm that includes the Cornwall Alliance as one of its projects and pays the salary of Calvin Beisner, Cornwall’s founder and spokesperson. [29]

“We are putting together what I think is the most comprehensive, unique, entertaining and humorous climate documentary that has ever been done or attempted,” Morano had said before the film was released. [33]

“The reason that this is a unique film,” Morano has said, “is that we are going for a pop culture-friendly… sarcastic approach and we actually give both sides in this movie.”  [33]

In an interview with Ezra Levant, Morano said:

“I am not interviewing a lot of the main climate sceptical scientists because I feel like they have been interviewed by many other people and their stories have been told. I am trying to find another layer of scientist whose stories have not been out there yet. You will see a lot of new names in this.” [33]

See a preview of the film below:

At the Paris premier of the film, reporters from Desmog and the Irish Times were denied entrance after having their RSVPs accepted days earlier. [34]

Leighton Steward appears as a “Key Scientist” in Marc Morano’s documentary film, Climate Hustle, which debuted on December 7, 2015, in Paris, France during the COP21 United Nations summit on climate change. [23] The film chiefly showcases Morano’s personality, a range of discredited scientists, and no new factual information about climate change.

Other notable “Key Scientists” featured in Climate Hustle include: [23]

H. Leighton Steward was a speaker at an event hosted by the Texas Public Policy Foundation titled “At the Crossroads Energy & Climate Policy Summit.” [24]

Leighton Steward spoke as part of Session 1, “The Earth’s Climate History” alongside Don Easterbrook. According to the event description, “This panel will discuss the earth’s 1500-year climate cycles which, at times, have had higher temperatures and CO2 levels than today.” [24]

The full list of event speakers was as follows: [24]

Steward was a moderator at the Heartland Institute‘s Tenth International Conference on Climate Change (ICCC10) in Washington, D.C. [37]

H. Leighton Steward was a guest on the Heartland Institute’s daily podcast where he describes his role in The Right Climate Stuff (TRCS) and his group’s conclusion that “there is no convincing physical evidence of catastrophic man-caused global warming.”

According to Leighton, the report concludes that “Real, empirical evidence does not support global warming.” The Right Climate Stuff website does not provide a list of all contributing authors or their credentials, however the list of 20 “Appolo era NASA retirees” includes noted climate change skeptics Harold Doiron and Walter Cunningham [20]

TRCS’s report is addressed at SkepticalScience, where many of the questions posed in the report are provided answers. [16]

Steward was a moderator at the Heartland Institute’s Ninth International Conference on Climate Change (ICCC9) in Las Vegas, Nevada. [13] He moderated Panel 6: “The Right Stuff” with Thomas Wysmuller, Hal Doiron, and Walter Cunningham.

The Right Climate Stuff released a report and press release where they summarize their findings as follows:

The group also presented at the Heartland Institute’s 7th International Conference on Climate Change (ICCC-7) in 2012 in Chicago.

Steward was a speaker at the Heartland Institute’s Seventh International Conference on Climate Change (ICCC7). He spoke on the NASA letter writer’s panel with Walter Cunningham, Thomas Wysmuller, Harold Doiron, and Harrison Schmitt. Footage can be viewed below.

The ad, featured in The Washington Post, urges people to vote against “the president’s cap-and-trade bill that will increase your cost of living and not change the climate.”

According to the ad, “The bill is based on the false premise that man-made CO2 is a major cause of climate change. Real, empirical evidence indicates it is not.” [6]

Steward is the spokesman and Chairman for CO2 is Green, as well as the President and Chair of Plants Need CO2.

Steward was a keynote speaker at the Heartland Institute’s Fourth International Conference on Climate Change (ICCC4). [7] HIs speech, titled “Empirical Evidence (Paleoclimates) and the Disconnect of Climate Change” can be viewed below.

Published “Fire, Ice and Paradise” which he describes as “an educational book for the non-scientist, including politicians, regarding the many factors affecting global climate change.”

“The bottom-line summary of the author’s opinion after research of the scientific literature is that carbon dioxide (CO2) is not a major contributor to current global warming nor to Earth’s paleoclimates.”

According to Leighton Steward, “In addition to being shown to not being a significant driver of current temperature change, CO2 is shown to be a positive factor in Earth’s ecosystems, a benefit to the plant (food) kingdom and thus the animal kingdom, which includes humanity.” [4]

According to a search of Google Scholar, Steward has not published any articles in peer-reviewed journals on any subject.