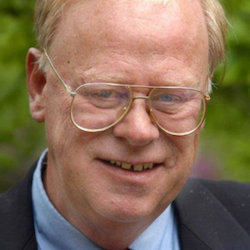 * While a number of sources (here, and here for example) identify Hans Labohm as having a PhD this appears to be a confusion over the term “Doctorandus” which is a Dutch academic title equivalent to a MA or MSc degree. Labohm studied Economics and Economic History at the University of Amsterdam.[12], [8],[13]

Hans Labohm was past advisor and senior visiting research fellow to the Netherlands Institute of International Relations, Clingendael, from 1992 to 2005. [1]

He is now an independent economist and publicist. Labohm describes himself as the “unofficial coordinator” of the network of Dutch climate change skeptics. He also a member of De Groene Rekenkamer (The Green Court of Audit), a little-known Dutch anti-environmental group with conservative ties and links to many of the Dutch climate change skeptics. [14]

Labohm has written for various Netherlands newspapers in the Netherlands including Het Financieele Dagblad, Trouw, NRC Handelsblad, and De Volkskrant. Labohm also has a regular column at the Dagelijkse Standaard, a conservative web blog started by Joshua Livestro (once an advisor for Sarah Palin on matters relating to Europe’s economy). Labohm has also been a regular contributor to Tech Central Station (TCS). [2]

In an interview with Kate & Richard Mucci for Matrix News Network (USA), where he was introduced as an expert reviewer of the IPCC, Labohm responded to a question about his beliefs on climate change:  (see Part 1, Part 2, Part 3, and Part 4 on YouTube). [28]

Kate Mucci: Now where does this notion that CO2 emissions from human activity actually cause global warming? The causal relationship is not established at all.

Hans Labohm: “Yeah, well that’s true. […]  CO2 plays a role in the rise of temperatures, that was the conclusion which one drew. But at the end of the previous century measurements became more accurate as we got to time resolution and then it became clear that temperature rises precede rises of the CO2 concentrations in the atmosphere by approximately 800 years. And that means that the causal relationship is just the other way around.”

Note that this is a common climate change myth addressed by SkepticalScience.

In Part 2 of the interview, Labohm suggests there is “nothing unusual” about any warming that has occured:

Note that this is another myth specifically addressed my SkepticalScience.

He went on to criticize the IPCC and emissions reducton targets:

“We have a kind of mini Kyoto in Europe that these CO2 schemes and these schemes which aim at reducing the emissions of CO2 will have no detectable effects, um, worldwide temperatures,” Labohm said.

” […] the point is that people have been indoctrinated by the one-sided, uh, announcement and statements of the IPCC and this particular fact that they don’t have no detectable effect on temperatures. Has always been hidden by the IPCC and by the proponents of the manmade global warming hypothesis.”

“I started as an anthropogenic global warming believer, then I read the [UN‘s IPCC] Summary for Policymakers and the research of prominent skeptics.”  “After that, I changed my mind” [3]

Some additional quotes from Labohm’s interview with Matrix News Network (USA) below: [28]

Kate Mucci: “So Hans Labaum, what do you think about freezing all co two emissions?”

Hans Labohm: “Well, I think that the complete freeze on CO2 emissions will be the end of our civilization as we know it, because our way of life is critically dependent upon the availability of energy at affordable prices. And there are billions of people out there who also want to attain a better standard of living.

“For Al Gore and others to suggest that there are many horrible things going on in the world and attributes it to man-made global warming but there is no convincing scientific evidence to substantiate those claims. Consequently, his assertions are pure fiction, not even science fiction.”

On polar bears (see Part 2 of the interview):

“Nevertheless, in my capacity as expert reviewer of the IPCC, I have also received (a tiny) part of the Nobel price, which has been awarded to Al Gore and the IPCC (yes, thanks for your congratulations). Should I be grateful? I don’t think so. Both ‘An Inconvenient Truth’ and the latest IPCC report labour under cherry-picking, spindoctoring and scare-mongering (Al Gore’s movie more than the IPCC reports). Awarding the Nobel price for such flawed science is a disgrace” [4]

Note: Although Labohm describes additionally described as an IPCC “Expert Reviewer,”this does not mean that the IPCC officially requested him to review any of their documents.

According to a translation of his acceptance speech quoted by DGR, via Google Translate: [26]

“I was already afraid that the climate hype would give rise to more regulation and a tendency of our economic model towards central planning. And we knew, from the experiences and also from the theory, of the 70s that the central plan produces model and less prosperity and less freedom for the people. So as an economist, I was afraid of such a development.” [26]

View the video below.

Hans Labohm is listed as a “Founding Member” of group named Climate Exit (Clexit) led by climate change denier Christopher Monckton. According to Clexit’s founding statement (PDF), “The world must abandon this suicidal Global Warming crusade. Man does not and cannot control the climate.” [20], [21]

Desmog reports on how the group grew in the wake of the UK‘s decision to leave the EU. A key member of Clexit’s “60 well-informed science, business and economic leaders” is Hugh Morgan, a former board member of the Reserve Bank of Australia and former CEO of Western Mining Corporation with close ties to Australia’s Liberal party. [22], [23]

“If the Paris climate accord is ratified, or enforced locally by compliant governments, it will strangle the leading economies of the world with pointless carbon taxes and costly climate and energy policies, all with no sound basis in evidence or science […]” [21]

Hans Labohm was a signatory to an open letter to Pope Francis on climate change. The letter invites the Pope to reconsider his views on climate change before his upcoming encyclical letter on the environment, which is widely expected to call for measures to prevent climate change in the interests of the world’s poor. [30]

The open letter was coordinated and signed by Calvin Beisner of the Cornwall Alliance. According to the letter, “Good climate policy must recognize human exceptionalism, the God-given call for human persons to ‘have dominion’ in the natural world (Genesis 1:28), and the need to protect the poor from harm, including actions that hinder their ascent out of poverty.” [30]

Hans Labohm was signatory to an open letter to United Nations Secretary General Ban Ki-Moon calling for the UN to “lead the UN into abandoning the CO2-based theory of global warming and nullifying its former recommendations.” [25]

“The assertion that the recent rapid rise of CO2 is unique and dangerous is both deceptive and irrelevant because CO2 does not drive the world’s climate,” the letter claimed, adding “ there is clearly no evidence for the CO2-based theory of global warming. Indeed, there is only evidence against it.” [25]

The letter was signed by many notable climate change deniers, including but not limited to: [25]

Labohm was a signatory to the 2006 open letter to Prime Minister Stephen Harper that recommended the government stall any action on climate policy because the “climate changes all the time due to natural causes.” [5]

Labohm was a speaker at the Heartland Institute‘s fourth International Conference on Climate Change (ICCC4) in Chicago. [24]

Signed an open letter to the UN‘s Secretary-General Ban Ki-Moon. The letter states that “the IPCC’s conclusions are quite inadequate as justification for implementing policies that will markedly diminish future prosperity.” [6]

Although Labohm has not published original research in peer-reviewed journals, he disputed this claim, saying that his following articles had received more peer review than Michael Mann’s Hockey Stick:

Novo Magazine does not appear to be a peer-reviewed journal by traditional standards.

Labohm co-wrote a book titled Man-Made Global Warming: Unravelling a Dogma, published by Multi-Science Publishing in 2004.  The other authors were Simon Rozendaal, a journalist, and Dick Thoenes, a chemical engineer.

The premise of Unravelling a Dogma is that the current science on global warming is “not strong enough to scientifically prove that manmade global warming exists.”