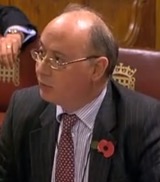 Nicholson and the EIUG have argued that climate policies harm the economic competitiveness of the UK‘s most polluting industries. The EIUG includes “lobbying for discounts under the Climate Change Levy for energy-intensive sectors which undertake to improve energy efficiency” as an area in which it has played a “key role“ according to its website. [3], [2]

Nicholson was the registered “public enquiry point“ for the All-Party Parliamentary Group (APPG) on Energy Intensive Industries. APPGs are a means for companies and lobbyists to engage directly with politicians that may be sympathetic to their interests, as DeSmog has previously reported. [4], [5]

Nicholson has attended events organised by climate science denial campaign group, the Global Warming Policy Foundation. This includes a talk by Myron Ebell, Director of Energy and Environment for the US thinktank the the Competitive Enterprise Institute, which is known for spreading climate change disinformation, in February 2017. Nicholson was also in the audience for former Australian prime minister Tony Abbott’s 2017 annual lecture to the group, which included numerous climate science denial tropes. [6], [7]

In a report for the think tank Civitas, Nicholson wrote with conservative economist Ruth Lea: [8]

“The Government’s climate change strategy is already proving to be costly for both domestic and business energy consumers as current policies significantly raise electricity costs.”

Nicholson was quoted in a Civitas publication: [9]

“There are differences in terms of approach to energy and climate even when it comes to working towards common European targets… certainly Britain is going for the gold-plated approach—the classic case is the Climate Change Act which goes well beyond anything Europe would ever have asked us to do, and on renewables where we should never have signed up to the target on this.”

Nicholson attended a talk by Myron Ebell from climate science denying US thinktank the Competitive Enterprise Institute, organised by the GWPF. [6]

Nicholson told a meeting of climate science deniers that strict climate goals in the UK were moving heavy industry to China and India, ClimateHome reported. [11]

In reaction to a government publication that suggested energy price rises were due to the rising cost of gas, Nicholson released a statement saying that, to the contrary, it is “almost entirely” due to energy and climate policies. [12]

Nicholson co-authored a report for right-wing thinktank Civitas with Ruth Lea, which claimed the UK’s climate policies are causing bills to rise and having a significant impact on industrial employment. Lea has previously claimed that “there seems to be little scientific agreement that mankind’s fossil-fuel burning is the major reason for climate change.” [8], [13]