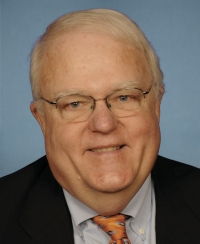 Frank James (Jim) Sensenbrenner, Jr. is a member of the Republican Party in the United States House of Representatives. After serving in Wisconsin State Legislature for ten years, he was elected to the House of Representatives in November 1978, representing Wisconsin’s 5th congressional district. Sensenbrenner announced in September 2019 that he would not seek re-election at the end of his term. [12], [25]

Sensenbrenner chairs the House Committees on the Judiciary and Foreign Affairs and formerly chaired the House Science Committee. He served as the ranking Republican on the House Select Committee for Energy Independence and Global Warming from 2007 to 2011. [12]

Rolling Stone Magazine listed Sensenbrenner as one of their “10 Worst Congressmen” in 2006 for his “assault on free speech” and “major role in curtailing civil liberties.” The article lists some of the reasons for his unpopularity including reports that he had lobbyists pay for his transportation, a violation of congressional rules (his total travel expenses are higher than any other congressman). [3]

He also approved a bill that made it more difficult for Americans to declare bankruptcy, and refused to consider an exemption from the bill for victims of Hurricane Katrina. He additionally voted against the aid package designed to help Katrina victims. [3]

The League of Conservation Voters (LCV), a group that tracks pro- or anti-environment votes in Congress, gave Sensenbrenner a score of 6% of pro-environmental votes in 2018 with a lifetime score of 25%. [24]

The Washington Times reported Sensenbrenner would be campaigning to be a ranking member of the Select Committee on the Climate Crisis created by Democrats ahead of the 2020 election. [22]

“People might call me a climate change denier — my position on climate change is yes, I do believe there is human impact on climate change, but there is no consensus whatsoever on how much impact there is,” Sensenbrenner told the Washington Examiner. He added he would take a “free market” perspective to the committee.

“I am interested in selling the American people that market-based solutions work rather than all kinds of bureaucratic taxes or regulations that haven’t worked in Europe, wouldn’t work here, and would be extremely unpopular with voters,” Sensenbrenner said in an interview. “We won’t win the House back if the Republican position is Green Revolution-light.”

Sensenbrenner replied to a question on his take on climate change during a town hall meeting: [23]

Sensenbrenner outlined his views on climate change in an interview with conservative radio show host Jay Weber (listen to the original audio here) and below: [15]

“I personally believe that the solar flares are more responsible for climatic cycles than anything that human beings do and our lunar, our rovers on Mars have indicated that there has been a slight warming in the atmosphere of Mars and that certainly was not caused by the internal combustion engine.” [4]

At a town hall meeting in Fort Atkinson Wisconsin, after being asked to support H.R.763, the Energy Innovation and Carbon Dividend Act of 2019, Sensenbrenner responded: [28]

“I am not in favor of the bill you talked about and will oppose it and vote against it,” he continued. “The reason is that it’s a zero-sum game. What it does is limit carbon emissions and, with that, you’re going to see big jumps at the gas pump, the price of natural gas and the price of electricity.”

Sensenbrenner maintained a page on “global warming” on his House website, from as early as 2009 to 2016, according to captures by the Internet Archive. [5], [20]

“I am a leader in the fight against the national energy tax proposal some Congressional leaders are advocating. I call this bad idea ‘cap-and-tax’ because of the damage it will do to jobs, manufacturing and our economy.”

Sensenbrenner spoke with conservative radio host Jay Weber about his views on “Climategate”: [6]

“The President’s science advisor, who is a former Harvard professor named Holdren, is involved in the email scandals and covering up the fact that data has been lost, the fact that contrary opinions to the global warming crowd has been squeezed out of scientific journals … Now this is an international conspiracy.”

Sensenbrenner was one of only two Wisconsin lawmakers with the ability to sit in on closed-door meetings of the impeachment inquiry for Donald Trump. While other Republicans have complained they are on the outside, Sensenbrenner declined the opportunity. [21]

He said in an interview:  “I have chosen not to do so because I can’t talk (publicly) about what I find out inside those meetings. This is a way, in my opinion, to gag members of the foreign affairs committee and the other two committees — Republican members — from actually going out and talking about what the testimony was.” [21]

Sensenbrenner was a speaker at the Heartland Institute‘s Seventh International Conference on Climate Change (ICCC7.) [14]

In response to Heartland’s controversial billboard campaign which portrayed climate scientists as “murderers, tyrants, and madmen,” Sensenbrenner said that he would not be participating in the conference unless they pull the ad. [16], [17]

The Institute has since stated they were ending the billboard campaign which they describe as an “experiment.” [13]

DeSmogBlog researched the co-sponsors behind Heartland’s ICCC7 and found that they had collectively received over $67 million from ExxonMobil, the Koch brothers and the conservative Scaife family foundations. [18]

Wrote to President Obama urging him to disband the White House Office of Energy and Climate Policy due to what he describes as its “lack of transparency.”[7]

The Office was created by Barack Obama in order to coordinate administration policy on energy and climate change. As of April, 2011 Congress no longer funded the Office. [19]

Sensenbrenner called the federal government’s response to the crisis “erratic” and suggested that the administration’s “apparent lack of regulatory oversight” allowed safety problems within BP to go undetected. [8]

“BP and the government need each other,” Sensenbrenner wrote. “So, I question again, how is the president publicly chastising and threatening BP with criminal actions — a company that has pledged to pay for the damage caused by the oil spill accident and who likely wants this resolved more than anyone — helping to stop the oil?” [9]

Sensenbrenner sent a letter to Rajendra K. Pachauri, Chair of the Intergovernmental Panel on Climate Change, suggesting that all scientists involved in “Climategate” be barred from contributing to the IPCC‘s Assessment Reports. [27]

Sensenbrenner was a speaker at the Heartland Institute‘s Third International Conference on Climate Change (ICCC3) where he spoke on Panel 2: “Economics” with David Tuerck and Gabriel Calzada. [26]

As ranking member of the House Select Committee for Energy Independence and Global Warming, Sensenbrenner was part of a congressional delegation led by Speaker Nancy Pelosi (D-CA) that traveled to China to assess the potential for cooperation on international climate change efforts.

At a press conference, Sensenbrenner said:

“It’s business as usual for China. The message that I received was that China was going to do it their way regardless of what the rest of the world negotiates in Copenhagen.”

Sensenbrenner appeared to have based his comments on remarks made by Chinese economist Pan Jiahua who directs the Institute for Urban and Environmental Studies at the Chinese Academy of Social Sciences.

He accused Professor Pan of “denigrating the Waxman-Markey [energy and climate] bill,” and claimed that Professor Pan said “China has been too aggressive in reducing their [sic] emissions.”

Sensenbrenner insinuated that Professor Pan was “speaking for the thinking of China,” and concluded that Pan’s position represented a “significant step backwards.”

Pan later released a statement to the Center for American Progress where he characterized Sensenbrenner’s selective reading of his comments as “improper and unethical,” and designed to “frighten the American public and halt U.S. progress on solving the problem of global warming.” [11]