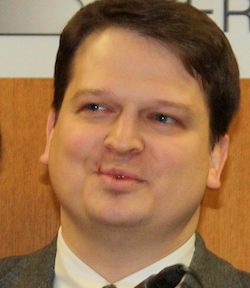 Joseph “Joe” Balash formerly served as the Chief of Staff to Senator Dan Sullivan and is the former Commissioner of the Alaska Department of Natural Resources. He was nominated by President Donald Trump to become Assistant Secretary of the Interior, Land and Mineral Management. [2]

Ryan Zinke welcomed Balash into the Department of the Interior (DOI). “I am so glad we finally have an Assistant Secretary for Land and Minerals! It’s been a while,” said U.S. Secretary of the Interior Zinke. “Joe has waited a very long time, and we look forward to his experience being brought to the table at our next meeting. […]” [3]

Balash worked at the Alaska Governor’s office for the duration that Sarah Palin was governor, and at the beginning of Sean Parnell’s governorship. [1]

“I believe climate change is not a hoax and that man has an influence,” Balash said, as reported in Alaska Public Media. [4]

Speaking of the proposed repeal of methane rules that would regulate emissions from oil and natural gas drilling on federal lands, Balash said: [5]

“In order to achieve energy dominance through responsible energy production, we need smart regulations, not punitive regulations.” Balash added, “We believe this proposed rule strikes that balance and will allow job growth in rural America.”

Balash travelled along with representatives from the BP oil company regarding Alaska’s LNG Project. [6]

“These were BP’s meetings. They set them up and handled the invitations, and we were invited to come along,” Balash said. “There is a lot of confusion in Asia about Alaska and the opportunities here, so we felt it was important to do this with BP and for us to be seen standing alongside each other. It’s an important way of demonstrating alignment,” Balash said in an interview.

Speaking at an event hosted by the International Association of Geophysical Contractors, Balash told attendees that the Trump administration would soon be pushing for large coastal areas of the Atlantic Ocean to be opened up for oil and gas exploration. [17]

Balash provided a revealing take on how the administration’s bureaucrats are able to enact significant policy moves with minimized public scrutiny:

“One of the things that I have found absolutely thrilling in working for this administration is the president has a knack for keeping the attention of the media and the public focused somewhere else while we do all the work that needs to be done on behalf of the American people.” [17]

He assured the association’s members that the Trump administration was doing everything in its power to assist the fossil fuel industry:

“We have been working aggressively to put America on track to achieve the president’s vision for energy dominance.” [17]

“The purpose of this event is to promote and expand energy freedom in the United States, as outlined in President Donald Trump’s bold America First Energy Plan, a proposal first released during the 2016 presidential campaign. The president’s plan marks a decisive change in direction from the Obama administration’s ‘war on fossil fuels’ and focus on the theory of catastrophic man-caused climate change,” the conference description reads. [7]

At an Arctic-focused symposium that coincided with the anniversary of BP’s Deepwater Horizon oil spill in 2010—Balash previewed an upcoming decision for Hilcorp’s Liberty project, saying he expected a final decision later that year. “Given where oil priorities are today, I’m assuming that would be an affirmative decision,” he said, “that would be supportive of that kind of activity.” The drilling project was later overturned by a federal court. [18]

When questioned, he emphasized that the decision had not yet been made on the project, and “Ultimately, the decision on whether to go forward with the decision is going to be based on the law and regulations, not our feelings toward the applicant.”

He went on to defend Hilcorp’s record, including a 2017 underwater methane gas leak from a Hilcorp pipeline in Cook Inlet. [19]

Hilcorp had a number of violations and spills since it began operating in Alaska in 2012. In a November 2015 report, first reported at Inside Climate News, the Alaska Oil and Gas Conservation Commission wrote of Hilcorp: [20]

“The disregard for regulatory compliance is endemic to Hilcorp’s approach to its Alaska operations and virtually assured the occurrence of this violation. Hilcorp’s conduct is inexcusable.”

At the 2018 symposium, Balash boasted he had played a role in bringing Hilcorp to Alaska while he worked as commissioner for the Alaska Department of Natural Resources (DNR). [18]

“I’m familiar with Hilcorp,” he said. “As DNR commissioner, I helped bring them to Alaska.” [18]

He described his work in Alaska, according to a transcript of the event reviewed by DeSmog: “I’m involved day-to-day in the work that’s being done here,” Balash told the group of Alaska oil and gas industry representatives. “Which is a little unusual for an assistant secretary to spend this amount of time on.” [18]

Balash was later featured in the Department of Interior’s press release announcing approval for Hilcorp’s Liberty drilling project in Arctic waters. That press release commented on the government’s “rigorous evaluation process based on the best and most recent science available.” [21]

“Using input from North Slope communities, tribal organizations, and the public, we have developed a robust set of environmental mitigation measures and safety practices that will be applied to this project,” Balash said in the statement. [21]

Balash was among DNR staff members who signed an initial finding giving Caelus Energy preliminary approval. The proposed royalty reductions would likely be worth about $75 million to Caelus Energy, Anchorage Daily News reported. [9]

Alaska Journal of Commerce reported Balash had “accompanied BP officials to Asia on the first formal sales trip for the giant project.” Balash also met in Seoul with KOGAS, Korea’s natural gas company. The meetings were with regards to the Alaska LNG Project, to “demonstrate the alignment between Alaska and the producer companies.” [10]

“These were BP’s meetings. They set them up and handled the invitations, and we were invited to come along,” Balash said. [10]

“There is a lot of confusion in Asia about Alaska and the opportunities here, so we felt it was important to do this with BP and for us to be seen standing alongside each other. It’s an important way of demonstrating alignment,” Balash said in an interview. [10]

Balash was reportedly set to also accompany BP officials on tour of an LNG project in China. [10]

While working as commissioner of the Alaska Department of Natural Resources, Balash claimed about 20,000 acres of the Arctic National Wildlife Refuge would be used for oil and gas leasing. [11]

“Our hope is that BLM will move quickly to convey the lands so we can offer them for leasing,” Balash said.

“I’m pleased we are now able to award these leases to the 2011 bidders and clarify the acreage that is available for oil and gas exploration in this highly prospective area,” he said of the lease awards.

“Our next step is to determine how the state’s assertion will affect existing leases on (other) tidal and submerged lands along the ANWR boundary.” [11]

Governor Sean Parnell had said that the TransCanada and North Slope oil producers were at the “preliminary front end engineering design” as of summer 2013. [12]

“That’s a lot of words to say actually doing the math and understanding what it’s going to take to physically put together the pipe,” said Balash. [12]

Balash filed an appeal to the Fish and Wildlife Service to reconsider its decision to bar the state from seismic studies in the Arctic National Wildlife Refuge, E&E News reported. [13]

Balash testified before Congress to support a bill that would “expedite oil and gas leasing and energy infrastructure permitting” in Alaska’s Natural Petroleum Reserve. Some criticized the bill, saying it could “imperil sensitive habitats for birds and caribou.” [14], [15]

Balash has testified before Senate regarding oil and gas exploration on public lands in Alaska. [14]