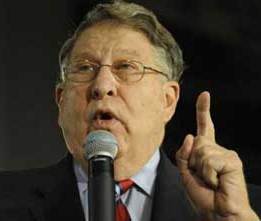 Ph.D. in Mechanical Engineering at the Massachusetts Institute of Technology in 1966. He completed both undergraduate and graduate levels at MIT. [1]

John H. Sununu served as the 75th Governor of New Hampshire from 1983 to 1989 and later as White House Chief of Staff under President George H.W. Bush from January 21, 1989 until 1991. Sununu stepped down amidst allegations he had used taxpayer-funded flights for personal flights. Sununu has been described as the “bad cop” to Bush’s “good cop” (and was profiled as such on a 1990 cover of Time magazine). While in the White House, Sununu was known for his disagreements on environmental issues with EPA administrator William K Reilly.  [1], [9], [10], [17]

John Sununu was president of JHS Engineering Company (JHS Associates, LTD) and Thermal Research Inc. until 1973 when he became a representative of the New Hampshire State Legislature. According to his Bloomberg profile, Sununu helped establish and served as a chief engineer for Astro Dynamics Inc. from 1960 to 1965. He has also served as chairman of the advisory board of Fusion Telecommunications International Inc. [1], [14]

He has been associated with a range of other companies such as North American Galvanizing & Coatings Inc., formerly Kinark Corp., where he served as a director since 1996. He has also been a director at Anglo Asian Mining PL. He is also a former partner in Trinity International Partners, a private financial firm. Sununu is currently a member of the board of Rift Energy Corporation, an oil and gas exploration company focused on developing East and Central Africa. [15], [1], [8]

In 2004 he co-chaired the Secretary of Energy Advisory Board, Nuclear Energy Task Force. He has taught at the Harvard Kennedy School of Government and at Tufts University where he served as associate dean of the College of Engineering. He also served on the Advisory Board of the Technology and Policy Program at MIT. [1]

Sununu co-hosted CNN‘s nightly “Crossfire” program from March 1992 until February 1998. He is a member of the National Academy of Engineering. [1], [12]

In 2018, The New York Times’s article “Losing Earth: The Decade We Almost Stopped Climate Change” highlighted Sununu as a key player in the George W. Bush era as an influence in veering the administration away from efforts to combat climate change. [13]

Sununu was formerly listed as a policy expert at the Heartland Institute, a think tank at the forefront of climate change denial that has received funding from ExxonMobil. [16]

Sununu appeared on HuffPost live where he claimed there had been “no change in temperatures” over the past 18 years: [19]

Minkovski: “90% of scientist that do agree…”

Minkovski:  “…that climate change is real. That it is something that is man-made.”

Minkovski: “It is true.”

Sununu: “I have a PhD in engineering. I understand the technologies involved, and I have to tell you the 90% consensus is an artifact. If you go back and talk…”

Minkovski: “Created by who?”

Sununu: “Created by those who support the policies. The fact is that …  the data is not out, and the figure is not correct. The data that we have today shows at least an eighteen-and-a-half year hiatus in what they claimed would be a horrible increase in temperature. […] So the point is, is that if you really look at the data, you’ll find out that the disastrous situation that they predicted has not occurred.”

In his speech at the Heartland Institute‘s International Conference on Climate Change (ICCC), Sununu declared:

“The global warming crisis is just the latest surrogate for an over-arching agenda of anti-growth and anti-development. This agenda grew and gathered support in the years following World War II.” [2]

Sununu, asked by The New York TImes about whether he considered himself personally responsible for killing a global warming treaty during the Bush administration, responded: [13]

“It couldn’t have happened,” he said, “because, frankly, the leaders in the world at that time were at a stage where they were all looking how to seem like they were supporting the policy without having to make hard commitments that would cost their nations serious resources.” He added, “Frankly, that’s about where we are today.” [13]

“Nature will eventually do what nature has always done. It will respond in a self-stabilizing manner over the long term with moderate variability over multi-decade periods and with occasional significant variability over the short term.

“But waiting for ‘eventually’ to prove the alarmists wrong is not the wisest course of action. Unfullfillable ambitions to stifle growth will devastate a world trying to deal with the complexities of economics, stability, and the environment. Quality of life depends on access to energy. Noble intentions about ‘C02-free’ sources of energy are not sufficient, if their agenda of eliminating coal as a source, and turning their back on nuclear, are allowed to be part of our near-term policies.” [2]

During a White House meeting between Sununu and former EPA administrator William K Reilly, Sununu reportedly interrupted a junior staff member who had mentioned an initiative to reduce fossil fuel use: [13]

“Why in the world would you need to reduce fossil-fuel use?” Sununu said.

“Because of climate change,” the staff member replied.

Sununu responded: “I don’t want anyone in this administration without a scientific background using ‘climate change’ or ‘global warming’ ever again,” he said. “If you don’t have a technical basis for policy, don’t run around making decisions on the basis of newspaper headlines.”

John H. Sununu was a speaker at the Heartland Institute’s second International Conference on Climate Change (ICCC2). His speech, titled “The Politics of Science: It ain’t pretty” can be viewed below. [4]

DeSmogBlog researched the funding behind the conference and found that sponsor organizations had collectively received over $47 million from energy companies and right-wing foundations, with 78% of that total coming from the Scaife Family of foundations. [5]

At numerous points during his speech Sununu refers to an “anti-growth lobby,” “anti-development crowd” and alludes to “alarmists” with an “agenda” as being behind the issue of global warming. When referring to the funding that goes to climate change research, Sununu claims that “the alarmists have effectively captured the funding allocation process.” [2]

When describing “some elements of the science” of climate change, Sununu points to research by prominent climate change skeptic Richard Lindzen to support his view that CO2 increases lag an increase in temperature: “it is temperature driving an increase in C02 and not C02 driving temperature.” According to SkepticalScience, this argument has been previously shown to be invalid. [6]

Sununu’s suggestion to climate skeptics is the following (emphasis added): [2]

“We need to recognize that for at least most of the next decade the real battle will be to win over public opinion and influence the policy makers. Unfortunately, standing between us and the public most of the time is the media. And the press seems to have bought the alarmist line, hook and sinker. They thrive on reinforcing the alarms.

I am often asked about the press. The question is usually something like ‘is the press biased or ignorant?’ My answer is: Yes they are.

We have to try to deal with a long-term education process and a long-term lobbying process. […] And, most important, we must work hard to communicate on these issues in terms that can be understood by non-technical individuals. We must remember we are trying to educate the public and policy makers.”

The Heartland Institute described Sununu as an “ally” of wireless companies fighting against industry regulation from the FEC in the Cell Phone Consumer Empowerment Act of 2007 (S. 2033). [7]

“When you regulate prices, when you get price controls for any component, every experience at the federal level with price controls has not worked,” Sununu said in a statement. [7]

Sununu featured EPA Administrator Carol Browner on CNN‘s “Crossfire” program. During the program, according to a summary by World Climate Report—a publication run by climate change denier Patrick Michaels and produced by the industry-funded front group called the “Greening Earth Society”— “Host John Sununu sent her into orbit by informing the Administrator that the more accurate way to look at the problem was to observe that the good ol’ U.S.A. turns out to be one of the most efficient nations in history—producing relatively little greenhouse gas per unit of gross domestic product.” [20]

Sununu, despite earlier opposing a binding agreement regarding climate change, personally signed a telegram to Geneva endorsing a plan to “to develop full international consensus on necessary steps to prepare for a formal treaty-negotiating process.” According to the telegram, “The scope and importance of this issue are so great that it is essential for the U.S. to exercise leadership.” [18]

The telegram occurred following controversy when the White House had allegedly ordered climate scientist James E. Hansen to change his testimony to avoid the impression “that there is unanimity within the government on this issue.”  [18]

At some point during his service as Counselor to the President, Sununu put together a group who would take care of “the action side of policy” which “could require formal and legally binding obligations associated with carbon dioxide emissions, which would have significant economic effects on the nation and on the capacity of this nation’s industrial growth.” [3]

The group consisted of Allan Bromley (as Science Advisor), Michael Boskin (the President’s Advisor of Economics), Dick Darman (Head of the Office of Management and Budget), and Roger Porter (in charge of domestic policy at the White  House). John H. Sununu joined this group as their fifth member. According to Sununu, “there was no disagreement that there was a trend of concern in the long run in terms of global temperature rise being a reality, but the questions that had to be answered were: What is the magnitude of it? How fast will that change take place? And also questions which rarely get asked — Is that change good or bad, and how does that change compare with other natural cycles that may be taking place at the same time? And finally, what kind of impact can any policy really have in dealing with those issues?” [3]

Sununu claimed that “some of the satellite data on temperatures were suggesting a temperature decrease pattern rather than a temperature increase pattern […that] certainly had to be put on the table as one of the fact points that the President had to be aware of.” He then goes on to describe how climate models of the time were inaccurate and “not well coupled to the ocean” and that “you do not make national policy based on such data.” [3]

Sununu and his committee put these answers forward to the President with the recommendation that “the President of the United States should not commit to policies that would result in trillion dollar changes in the U.S. economy until there were then more adequate technical bases for such a position” [3]

Sununu resigned from his his position as White House chief of staff, telling President Bush he feared he would be “a drag” on his re-election campaign, The New York Times reported. [11]

“I knew the rules of the game when I came to town. He’s going into a campaign. He doesn’t need the extra political target that folks would be shooting at,” Sununu told reporters. [11]

“The removal of Mr. Sununu seemed designed to give the President a chance to dispel the aura of confusion and hesitation that has hurt his Administration in recent months. He left Mr. Sununu with a consolation prize that seemed modest in light of speculation that the chief of staff would be given a major Cabinet department to placate him and conservative Republicans who are loyal to him,” Andrew Rosenthal wrote at The New York TImes. [11]

Sununu is the author of The Quiet Man: The Indispensable Presidency of George H.W. Bush, documenting his experiences as Bush’s former Chief of Staff.

According to a search of Google Scholar, John H. Sununu has published the following articles, larely in the area of engineering and policy: