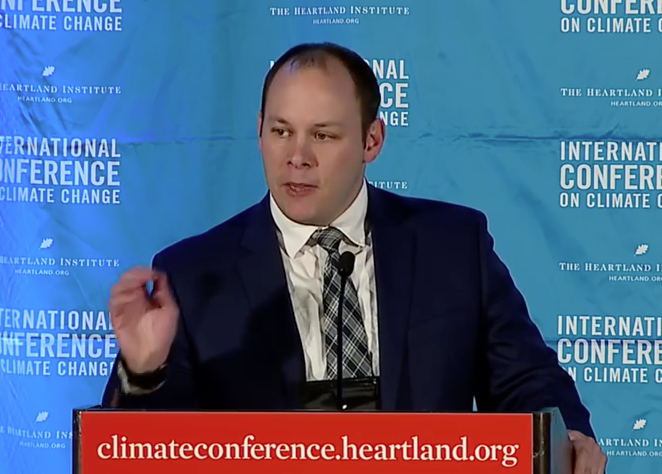 John Nothdurft is the Heartland Institute‘s Government Relations Director, and previously served as a legislative specialist on budget, tax, and tobacco policy. Prior to joining Heartland John was the National Press Coordinator for Americans for Fair Taxation. [2]

A paper co-authored by Nothdurft and published by the Heartland Institute, “Ten State Solutions to Emerging Issues“ stated:

“Fear of Global warming – aka “climate change” – led to the adoption of numerous taxes, regulations, and subsidies aimed at reducing carbon dioxide emissions. Real-world observations and improved scientific methods, however, reveal the threat of global warming was exaggerated. Laws discouraging or restricting carbon dioxide emissions have almost zero impact on climate and temperature.” [3]

In a press release from the Heartland Institute regarding Scott Pruitt‘s EPA appointment, Nothdurft stated:

“The selection of Oklahoma Attorney General Scott Pruitt is an obvious commitment to a pro-environment, pro-energy, pro-jobs agenda. Pruitt has been a vocal critic of federal overreach and understands that state agencies are well-positioned to take on a larger role in protecting the environment while also allowing for responsible and necessary commerce and energy production. This pick will go a long way towards correcting the Obama administration’s regulatory overreach, which has cost us jobs, hurt farmers, and has had an insignificant effect on the environment.” [4]

“Although moratoria are sought by environmental activists, there is no scientific justification for banning fracking.

“Global warming alarmists argue human activities, primarily the emission of greenhouse gases from energy use, are driving a rapid rise in global average temperature that is causing a climate crisis. This theory and the climate models that underpin it are strongly contradicted by real-world evidence.” [3]

In a post on the Heartland’s blog Somewhat Reasonable, Nothdurft wrote:

“Despite what these fringe groups want you to believe, ALEC is not involved in any black helicopter conspiracy. ALEC is in fact a very effective and respected public-private partnership that brings together state legislators, members of the private sector, the federal government, and general public to openly discuss public policy and free-market solutions. It does not hide that its stated mission is to advance “Jeffersonian principles of free markets, limited government, federalism, and individual liberty.” [5]

“The purpose of this event is to promote and expand energy freedom in the United States, as outlined in President Donald Trump’s bold America First Energy Plan, a proposal first released during the 2016 presidential campaign. The president’s plan marks a decisive change in direction from the Obama administration’s ‘war on fossil fuels’ and focus on the theory of catastrophic man-caused climate change,” the conference description reads. [18]

Panel 1B “Energy and Prosperity”:

Panel 5A “The Cost of Excessive Regulation”:

The event description read as follows: [10]

“What scientific and economic evidence is there that the plan is putting the nation on the right path for economic growth, environmental protection, or both?” [10]

In a fundraising letter obtained by DeSmog, Fred Palmer had promoted the event as having the goal to “review the scientific and economic evidence that exposes the fraud inherent in the Obama-era regulation regime” while discussing “the overwhelming benefits of fossil fuels to us all.” [11]

As reported at the Houston Chronicle, speakers notably included two Trump Administration officials: Richard W. Westerdale II of the State Department and Vincent DeVito of the Department of Interior. David Bernhardt, deputy secretary of the Interior Department, was also formerly listed as a Heartland conference speaker, but apparently withdrew. [13]

The Climate Investigations Center put up a parody of the America First Energy conference website, complete with profiles on the individual speakers and highlighting their corporate funding and ties to groups such as the Cooler Heads Coalition (CHC). [15]

Nothdurft was listed as being involved in two sessions of the Heartland Institute‘s 12th International Conference on Climate Change (ICCC12), including lunch keynotes that featured Patrick Michaels and Lamar Smith, and a dinner keynote presentation by Robert Mendelsohn and Roger Helmer. [9]

“The keystone pipeline, outside the leftist environmentalist, most people were not against this. I mean, the opposition to the building of these pipelines was very small, very vocal, and you know, you show any normal person a map of where the pipelines are in this country and they are all over the pace. So, it’s kind of ridiculous that they are in this mentality that if we don’t build this they are just going to keep this oil in Canada and in the ground. They keep saying keep it in the ground.” [6]

Nothdurft has a blog at the Heartland Institute where he voices anti-regulatory views. [8]

Some of his entries include: