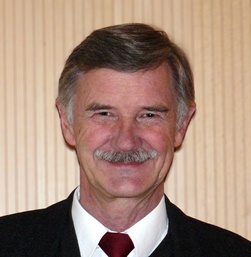 Josef H (Helmut) Reichholf is a German zoologist, evolutionary biologist and ecologist. He was an honorary professor at the Technical University of Munich from 1974 to 2010, has headed the State Zoological Collection in Munich, and is a past board member of WWF Germany. [1]

Reichholf studied biology, chemistry, geography and tropical medicine at the Ludwig-Maximilians University in Munich, obtaining a doctorate of science in 1969. [1]

Reichholf has claimed global warming would be beneficial to mankind, a view that he describes in his book False Prophets. [2], [3], [4]

German oceanographer and climatologist Stefan Rahmstorf has criticized Reichholf’s claims about climate change. He described a number of “misleading climate curves” used by Reichholf, and suggests that there is “ample evidence of his lack of understanding of basic relationships in the climate system.” [5]

In an article at Welt, Reichholf wrote (translated from German via Google Translate): [11]

“Global temperature is not rising despite growing CO2 emissions. This does not fit into the forecasts of politics and science. You have to be allowed to talk about it without being vilified.

“A distanced, journalistic commentary is hardly possible. Anyone who dares to risk being vilified as a ‘climate skeptic’ or even as a ‘climate denier’.”

In an interview with Der Spiegel (see translated to English): [2]

SPIEGEL: “Mr. Reichholf, are you worried about global warming?”

Josef Reichholf: “No. Personally, I’m even looking forward to a milder climate. But it will also not pose any major problems for mankind as a whole.”

Reichholf was quoted in an article by Right Side News: [8]

“In warmer regions, it takes far less effort to ensure survival. How did the polar bear survive the last warm period? Whether bears survive will depend on human beings, not the climate.” [8]

SPIEGEL: “And what is your view of the prognoses that global warming will cause up to 30 percent of all animal species to become extinct?”

Reichholf: “It’s nothing but fear-mongering, for which there is no concrete evidence. On the contrary, there is much to be said for the argument that warming temperatures promote biodiversity. There is a clear relationship between biodiversity and temperature. The number of species increases exponentially from the regions near the poles across the moderate latitudes and to the equator. To put it succinctly, the warmer a region is, the more diverse are its species.”

SPIEGEL: “Are you saying that the greenhouse effect could even help improve biodiversity in the long term?”

Reichholf: Exactly. And this can also be clearly inferred from the insights of evolutionary biology… .”

“And it is completely wrong, as is often argued, is that it would have never been as warm as today. This is absurd: 120,000 years ago, there were hippos along the Rhine and the Thames. This data should be evaluated before you exaggerate the current figures on horror scenarios. In addition, and in retrospect of the past thousand years makes it abundantly clear: it was the cold times in which we and other parts of the world have been hit by major disasters. Not the warm periods.” [6]

Josef Reichholf appeared before European Parliament for a public hearing on EU agriculture and climate change. He presented on “Impact of climate change on plant and animal health: some elements for debate.” [10]

Bild der Wissenschaft, introducing Reichholf in an interview, said he has published hundreds of scientific papers and written or coauthored more than three dozen popular books on biology, ecology or evolution [3]

While a search of Google Scholar confirms this, it also reveals that Josef Reichholf has not published any articles in peer-reviewed journals directly on the subject of climate change.