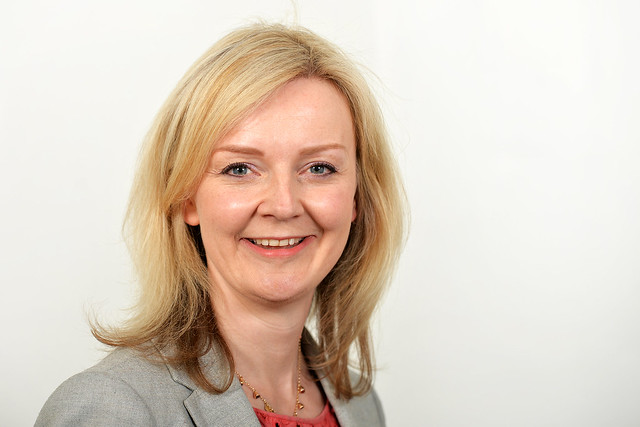 Liz Truss became the UK‘s Secretary of State for Foreign, Commonwealth and Development Affairs in September 2021 and is a Conservative MP for South West Norfolk. [2] [34]

Truss is also responsible for the UK’s post-Brexit relationship with the EU and the lead negotiator for the Northern Ireland Protocol, following Lord David Frost’s resignation as Brexit Cabinet Minister in December 2021. As part of the role, Truss became the UK’s co-chair of the Partnership Council and the Joint Committee. [32], [33]

Truss served as Environment Secretary between 2014 and 2016, during which she cut subsidies for solar farms, calling them “a blight on the landscape” and claiming they were harming food production. The policy turned out not to have been backed up by any evidence from her department. [3], [4], [27]

She was appointed Lord Chancellor and Justice Secretary in a 2016 cabinet reshuffle and was Chief Secretary to the Treasury between 2017 and 2019. [3]

In a 2012 interview with the New Statesman, Truss named Margaret Thatcher as her favourite British Prime Minister. [5]

Truss has close ties to free market groups based in and around 55 Tufton Street, having spoken at events organised by the Institute of Economic Affairs and the Adam Smith Institute and appointed three employees of Tufton Street groups as advisors following her appointment as International Trade Secretary. [6], [7]

During a trip to the US in 2018 while Chief Secretary to the Treasury, Truss met with several Koch-funded libertarian thinktanks and lobby groups that have a history of climate science denial. They included: the Cato Institute, American Enterprise Institute, ALEC, Americans for Tax Reform and Heritage Foundation. [6]

Since her election as an MP in 2010, Truss has been a vocal supporter of Heathrow expansion, backing the third runway despite a Conservative Party manifesto pledge to reject the proposal under David Cameron. She has also strongly supported fracking, calling opposition to the industry “NIMBY“-ist. [8], [9]

Representing a rural constituency, Truss has a close relationship with the Countryside Alliance, an NGO which supports fox hunting and grouse shooting. Truss spoke at a reception organised by the CA at the 2015 Conservative Party Conference, with her reappointment as Environment Secretary after the general election having been welcomed by the group. [10], [11]

Earlier in her career, Truss worked as a Commercial Manager at the oil and gas company, Shell, and subsequently as Economics Director at the telecommunications company, Cable & Wireless. [5], [1]

She was later Deputy Director of the thinktank Reform, which advocates free market reforms of public services. While claiming to be “strictly independent and non-party” in its approach, it has been described as belonging to the modern-day conservative movement by ConservativeHome founder Tim Montgomerie and Taxpayers’ Alliance founder Matthew Elliott. [1], [14], [15], [29]

A strong supporter of “free market” economics, Truss founded the Free Enterprise Group of Conservative MPs in 2011, shortly after entering parliament. The following year, Truss caused public outrage with a book called Britannia Unchained, which she co-authored with four other MPs from the group, including now Energy Minister Kwasi Kwarteng and Home Secretary Priti Patel. The book recommended extreme deregulation and contained the line: “Once they enter the workplace, the British are among the worst idlers in the world”. [16], [17]

The Free Enterprise Group has been described by openDemocracy as the “parliamentary wing” of the Institute of Economic Affairs, with which the group has co-hosted numerous events. The IEA also provides administrative support to the group, including handling media enquiries. [18], [19]

The IEA is one of a cluster of free-market lobby groups based in and around 55 Tufton Street in Westminster, which have promoted climate science denial and campaigned against policies to combat climate change. In July 2018, the thinktank’s Director General Mark Littlewood was filmed telling an undercover reporter from Greenpeace’s investigative unit UnEarthed, posing as a prospective donor, that they could discreetly influence a report in ways that could advance their business interests, in exchange for £42,500. [28]

A profile on the Conservative Home website described the Free Enterprise Group’s aims as “improving infrastructure and education, reducing taxes and regulation, and reforming public services”. The group has produced a number of reports over the years, including one in 2012 by Energy Minister Kwasi Kwarteng entitled “The Case for Aviation”, which recommends further airport expansion. [20]

In an interview with Parliament’s The House magazine, reported by BT News, Truss said: [21]

“I fully agree that climate change is happening. I think the evidence is very strong, but this department [DEFRA]’s role is making sure we adapt to climate change and that’s taken into account in all our modelling.” [21]

Announcing a cut in subsidies to farmers and landowners with solar panels on their land, Truss said: [22]

“I’m very concerned that a lot of our land is being taken up with solar farms.”

“Food and farming is our number-one manufacturing industry, the whole food chain represents £100bn in our economy, and it is a real problem if we are using productive agricultural land for solar farms.” [22]

During her time as Deputy Director of the Reform thinktank, Truss said that energy infrastructure in Britain was being damaged by politicians’ obsession with green technology, the Guardian reported. [23]

In an interview with Politics.co.uk regarding the expansion of Heathrow Airport, Truss said: [8]

“We do need a hub airport in the south-east of England… If you want to have a hub airport three runways probably isn’t enough. If we’re imaginative about Heathrow, I don’t see why we can’t build four runways there.”

Responding to the accusation that building a third runway would break the Conservatives’ manifesto promise, Truss said:

“There is not going to be a third runway going to be built in this parliament, so as far as I’m concerned we’re honouring the pledge in that manifesto.” [8]

In her role as Foreign Secretary, Truss announced that the British development finance institution would be relaunched as British International Investment (BII) to invest in infrastructure and technology in Asia, Africa and the Caribbean. [35]

The government’s announcement stated that the BII “builds on the Prime Minister’s commitments at COP26 to help developing countries take advantage of clean technology and grow their economies sustainably,” claiming that the BII will deliver “billions in climate financing for projects like solar power, sustainable transport and disaster-resilient infrastructure over the next 5 years.” [35]

Truss was reported to be considering including provisions such as corporate transparency on climate change and measures to mitigate air pollution in trade negotiations with the US. [31]

Truss spoke at the “World Forum” of the American Enterprise Institute, one of the richest think tanks in the U.S with a history of climate science denial. According to the Parliament’s Register of Members’ Financial Interests, the AEI spent over £8,200 on expenses for Truss to attend the event. [30]

Truss criticised then Environment Secretary Michael Gove‘s proposed controls on wood-burning stoves, calling them symptomatic of the “hot air” coming out of the Department for the Environment, Food and Rural Affairs. [25]

Truss told the House of Commons that there were “no plans” for the release of an unredacted version of a government report on the impacts of fracking on the rural economy. She said that the Department for the Environment, Farming and Rural Affairs (DEFRA) should never have produced the report, claiming it was the responsibility of the Department for Energy and Climate Change. [26]