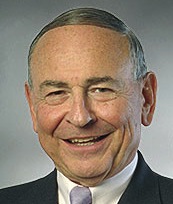 Maurice Newman is a former stockbroker, company director and chairman of the Australian Broadcasting Corporation and has been an advisor to several Australian governments. In September 2013 he was appointed chairman of the Tony Abbott-led Government’s Business Advisory Council. [2], [3]

Previously, Mr. Newman was the chairman of the Australian ASX stock exchange after spending several decades as a stockbroker and investment banker. In 1984 he was appointed a managing director and, later, executive chaiman at Deutsche Bank. He left that company in 2001. [2]

He was chancellor of Macquarie University between 2002 and 2008 and was chairman of the public-funded Australian Broadcasting Corporation from 2000 to 2004. [2]

He is a board member of the Queensland Investment Corporation, a state government-owned company which in November 2013 had more than $74 billion of funds under its management. [4]

Newman is a vocal opponent of wind farms and believes that the science of human-caused climate change is a “delusion.” [5], [6]

Newman has stated repeatedly that the science of human-caused climate change is a smokescreen for vested interests. He believes that the scientists who take part in the United Nation’s Intergovernmental Panel on Climate Change (UNIPCC) have fooled the world into believing climate change can be caused by humans. A “compliant media” has helped to foster the “myth” of climate change, according to Newman. [7]

Writing at The Australian Financial Review, Newman described cilmate change as a “myth”: [8]

“The CSIRO, for example, has 27 scientists dedicated to climate change. It and the Weather Bureau have become global warming advocates. They continue to propagate the myth of anthropological climate change and are likely to be background critics of the Coalition’s Direct Action policies.”

Writing at The Australian, Newman declared: [9]

“While CO2 may be a greenhouse gas, it seems that natural forces dominate climate change, not mankind’s emissions. Henrik Svensmark’s theory of cosmoclimatology (the role of cosmic rays) may be right.”

“This is the world of climate change. The science has become an expensive smokescreen behind which vested interests hide,” he also wrote.

In an interview with The Australian, Newman declared: [6]

“The scientific delusion, the religion behind the climate crusade, is crumbling. Global temperatures have gone nowhere for 17 years.”

Writing at The Australian, Newman declared: [10]

“When Mother Nature decided in 1980 to change gears from cooler to warmer, a new global warming religion was born, replete with its own church (the UN), a papacy, (the Intergovernmental Panel on Climate Change), and a global warming priesthood masquerading as climate scientists. Selfish humans in rich, polluting countries were blamed for the warming and had to pay for past trespasses by providing material compensation to poor nations as penance. Cutting greenhouse gas emissions became the new holy grail. With a warm wind at their backs, these fundamentalists collected hundreds of billions of dollars from naive governments that adopted their faith on behalf of billions of people. No crusader was ever so effective.”

Writing at The Spectator, Newman declared his opposition of wind farms: [5]

“Even before they threatened my property, I was opposed to wind farms. They fail on all counts. They are grossly inefficient, extremely expensive, socially inequitable, a danger to human health, environmentally harmful, divisive for communities, a blot on the landscape, and don’t even achieve the purpose for which they were designed, namely the reliable generation of electricity and the reduction of CO2 emissions.”

The Australian reported Lindzen was among those named in a statement by academic website The Conversation, which said it would ban comments from climate change deniers. The list was drawn from research published in the journal Nature, tracking the academic publications of climate change deniers and expert scientists across research in digital and print media on climate change. Those on the list included Richard Lindzen, Jennifer Marohasy, Judith Curry, Richard Tol, Bjorn Lomborg, Ian Plimer, and Maurice Newman. [18], [19]

Alex Petersen, lead author of the study, said: “It’s time to stop giving these people (contrarians) visibility, which can be easily spun into false authority. … By tracking the digital traces of specific individuals in vast troves of publicly available media data, we developed methods to hold people and media outlets accountable for their roles in the climate change denialism movement, which has given rise to climate change misinformation at scale.” [18]

Curry said the paper “does substantial harm to climate science … There are a spectrum of perspectives, especially at the knowledge frontiers. Trying to silence or delegitimise any of these voices is very bad for science.” [18]

The Conversation‘s editor and executive director Misha Ketchell commented: “We moderate anything that is a deliberate misinformation and distortion of facts or attempts to misrepresent arguments or community members. We know climate sceptics are very good at derailing constructive conversations, so we’ll remove comments that attempt to hijack threads or to push an agenda or argument irrelevant to the discussion.” [18]

Newman appeared on the Australian Broadcasting Corporation’s ‘Lateline’ broadcast, with Emma Alberici, after recently (September, 2013) being appointed as chairman to Prime Minister Tony Abbott’s Business Advisory Council. Discussing the topic of climate change, Newman was unswayed by Alberici’s mentioning of the fact that there is a “strong consensus” in the scientific community that human activities are causing climate change, citing surveys showing 97% of peer-reviewed climate studies agreeing that climate change is a human-induced problem. [11]

Newman immediately dismissed the surveys as having “flawed methodologies” and responded by saying:

“We know that there are a whole host of scientists out there who have a different point of view, who are highly respected, reputable scientists. So the 97 per cent doesn’t mean anything in any event because science is not a consensus issue. Science is whatever the science is and the fact remains there is no empirical evidence to show that man-made CO2, man-made emissions are adding to the temperature on earth. We haven’t had any measurable increase in temperature on earth for the last 17.5 years. If you look back over history, there’s no evidence that CO2 has driven the climate either. So I know that this is a view which is peddled consistently, but I think that the edifice which is the climate change establishment is now starting to look rather shaky because mother nature is not complying.” [12]

In his column for The Australian, reported on in The Guardian, Newman accused the IPCC of “dishonesty and deciet” and said the science of human-caused climate change is a “delusion.” [6]

In a column in the Australian Financial Review, Newman described human-caused climate change as a “myth” and criticised Australia’s science agency the CSIRO and the country’s Bureau of Meteorology for “propogating the myth.”  Australia’s chief scientist Ian Chubb told the ABC‘s Lateline program that Newman’s comments were “silly.” [8], [13]

Speaking as the chairman of the Australian Broadcasting Corporation, the country’s public broadcaster, Newman accused some journalists of succumbing to “group-think” in failing to entertain the views of climate change sceptics. [14]

When asked later by ABC reporter Brendan Trembath if he regarded himself as a “climate chnage denier,” Newman responded: “I am an agnostic and I have always been an agnostic and I will remain and agnostic until I’ve found compelling evidence on one side or the other that will move me. I think that what seems fairly clear to me is that the climate science is still being developed. There are a lot question marks about some of the fundamental data which has been used to build models that requires caution.”[14]

Newman is a founding board member of the free market think tank the Centre for Independent Studies, which in the 1990s invited and hosted several climate sceptics, including Mark Steyn, Bjorn Lomborg and James Delingpole. [15]

Maurice Newman is not known to have any scientific qualifications and, according to a search of Google Scholar, has never had a scientfic paper published on the subject of climate change.