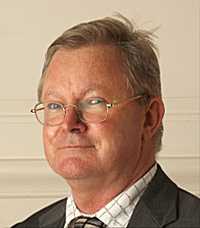 According to his university profile, Kelly’s research includes “the many downsides of the current carbon dioxide emission mitigation strategies that are making things worse by ignoring the complete system within which such measures are taken. The big problem for 2050 is energising mega-cities and only nuclear power and fossil fuels (perhaps with carbon capture and sequestration) produce the supply numbers that come anywhere near satisfying the demand numbers.”8“Professor Mike Kelly,” University of Cambridge. Archived October 30, 2019. Archive.fo URL: http://archive.md/gQjtY

From 2003 to 2005 Kelly was executive director of the Cambridge-MIT Institute. From 1981-1992 he worked at the General Electric Company’s Hirst Research Centre in the UK, subsequently moving to the University of Surrey. There, he served as professor of physics and electronics from 1992 to 2002 and the head of its School of Electronics and Physical Sciences from 1996 to 2001.9“Professor Michael Kelly,” Centre for Science and Policy, University of Cambridge. Archived October 30, 2019.

He was previously a non-executive director of Laird Group plc, a now defunct electronics and technology business, and chief scientific adviser to the Department of Communities and Local Government from 2006 to 2009.10“Professor Michael Kelly,” Centre for Science and Policy, University of Cambridge. Archived October 30, 2019. 11“The disclosure of climate data from the Climatic Research Unit at the University of East Anglia” (PDF), House of Commons Science and Technology Committee, Printed March 24, 2010. Part of a series of attachments making up the “Oxburgh Inquiry.”

“It is perfectly possible to adopt a position, as I have, of ‘a principled climate science scepticism.’ It is based on the fact that every time an engineering-standard analysis is done of the climate data, one ends up contradicting the results of the climate change modellers. I am heavily involved in the debate in the UK.”13Richard Treadgold. “Prof Kelly shows the middle way,” Climate Conversation, June 5, 2011. Archived April 30, 2019.

As a panel member for an inquiry into the “Climategate” controversy in 2009, Kelly said:14“The disclosure of climate data from the Climatic Research Unit at the University of East Anglia” (PDF), House of Commons Science and Technology Committee, Printed March 24, 2010. Part of a series of attachments making up the “Oxburgh Inquiry.” 15Steve McIntyre. “Kelly’s Comments,” Climate Audit, June 22, 2010.

“Up to and throughout this exercise, I have remained puzzled how the real humility of the scientists in this area, as evident in their papers, including all these here, and the talks I have heard them give, is morphed into statements of confidence at the 95% level for public consumption through the IPCC process. This does not happen in other subjects of equal importance to humanity, e.g. energy futures or environmental degradation or resource depletion. I can only think it is the ‘authority’ appropriated by the IPCC itself that is the root cause.”

Kelly reviewed the book Climate Rationality: From Bias to Balance, describing it as “the most forensic in its analysis of the public debate, the policy formation processes and indeed the scientific process itself.”16“Book review: ‘Climate Rationality: From Bias to Balance’,” NetZero Watch, October 6, 2021. Archived October 18, 2021. Archive URL: https://archive.ph/1aQYs

“It retreads much of the territory covered by Steven E. Koonin in his book ‘Unsettled: What Climate Science Tells Us, What It Does not, and Why It Matters’, but with different emphases,” Kelly commented.

Kelly said he “found the conclusions of each section quite compelling” — with examples being “The costs of precautionary policy” climate science institutions and “the science they neglect” and a “[t]owards a rational climate policy.”

He included several excerpts from the book. For example, the suggestion that the EPA’s enforcement of CAFE (corporate average fuel economy) standards “puts wealthier households in heavy, high powered, fuel inefficient but safe vehicles, and poorer households in fuel efficient by smaller vehicles.”

The book laments the cost of closing polluting coal plants in smaller towns due to MATS (mercury and air toxics rule). “That regulation [MATS] was only a small price of a regulatory agenda with the explicit goal of eliminating entire American industries,” it claimed.

It also claimed “regressive effects of renewable energy policies are magnified for minority households,” among numerous other highlights provided by Kelly.

In an article for The Spectator, Kelly characterised Prime Minister Boris Johnson’s 10 point plan for a “Green Industrial Revolution” as “doomed from the outset,” and “reckless, unscientific and certain to fail.” Kelly disputed the cost implications of Johnson’s plan, writing: “Johnson’s green revolution would mean that we would need to completely upgrade electric wiring in our homes, streets, substations, and transmission lines. To meet demand would require enormously costly upgrades to local electricity grids, which we would all ultimately pay for through higher energy bills. If this really is part of the plan, then the government must be honest about who is to foot the bill.”18Michael Kelly. “Britain’s green industrial revolution is doomed to fail,” The Spectator, November 23, 2020. Archived November 24, 2020. Archive.vn URL: https://archive.vn/gWT8o

Analysis by Carbon Brief has found models have “not been too far off from what actually occurred”.

Kelly gave the Global Warming Policy Foundation‘s annual lecture in London, entitled “Energy Utopias and Engineering Realities”, having been made a trustee of the climate science denial group in August. According to a press release about the event, Kelly argued the UK‘s commitment to reach “net zero” emissions by 2050 was “beset by superficial thinking that ignores engineering reality” and would be “unachievable without major social disruption”, calling the Committee on Climate Change’s cost estimates “pie in the sky.”20“Prof. Michael Kelly: Energy Policy Needs ‘Herds Of Unicorns’,” Global Warming Policy Forum, November 12, 2019. Archived November 13, 2019. Archive.fo URL: http://archive.md/Xyaqk

Media Matters reported on the 16 scientists who signed the Op-Ed, and found that most of them have not published any research in the area of climate science. Many, including Burt Rutan, have experience in fields entirely unrelated to climate science. Numerous other signatories also have connections to the oil and gas industry, or to industry think tanks.

When they contacted the Yale economist cited in the Op-Ed, he replied that it had been a “Complete Mischaracterization Of My Work.”22“The Journal Hires Dentists To Do Heart Surgery,” Media Transparency, January 30, 2012. Archived October 18, 2021. Archive URL: https://archive.ph/E7pyS

Kelly sent a letter to the editor of the Taranaki Daily News to complain that their columnist Rachel Stewart was “doing journalism a disservice,” presumably for her belief in mainstream climate science.23Richard Treadgold. “Prof Kelly shows the middle way,” Climate Conversation, June 5, 2011. Archived April 30, 2019.

Kelly goes on to cite a common climate change skeptic argument, saying “She might like to look at the recent analysis by Pat Franks which tightens the conclusion that the anthropogenic contribution is at most 0.3°C per century. This concludes that it is rising temperatures that are increasing the atmospheric carbon dioxide, not the other way round.”

He also cites a chart made by climate skeptic Syun-Ichi Akasofu, which Kelly claims is proof of a “systematic divergence, now 16 years old, between the modelling results and the actual data on climate temperatures.”

The panel as a whole concluded that “We saw no evidence of any deliberate scientific malpractice in any of the work of the Climatic Research Unit…”25“Report of the International Panel set up by the University of East Anglia to examine the research of the Climatic Research Unit” (PDF), Retrieved January 30, 2012, from The University of East Anglia.

Kelly himself concludes that there is “no evidence of blatant mal-practice,” but also mentions his distrust of climate models. In his comments, Kelly also points to a paper (PDF) by the skeptical Science and Public Policy Institute (SPPI), hosted on the ICECAP website, that suggests censorship by the Journal of Geophysical Research, which SPPI suggest may be “coerced into defending the climate alarmist faith.”26“Censorship at AGU: scientists denied the right of reply” (PDF), March, 2010 SPPI Paper – in press at http://scienceandpublicpolicy.org/.

Steve McIntyre picked up Kelly’s comments on the CRU and posted them at ClimateAudit, suggesting that they had been “suppressed by Oxburgh.”27Steve McIntyre. “Kelly’s Comments,” Climate Audit, June 22, 2010. Archived October 18, 2021. Archive URL: https://archive.ph/OPvEI

Kelly has published numerous articles in peer-reviewed journals on physics and electronics. He does not appeared to have published any research articles on the subject of climate change.