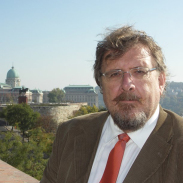 Miklós Zágoni is a physicist and past science historian at Eotvos Lorand University in Budapest as well as a governmental adviser.

According to the History and Philosophy of Science department at Eötvös Loránd University, Zágoni was an “assistant professor of philosphy” in January, 2006. He presumably left his position later that year, as in June, 2006, he is listed as a “Past Faculty Member.” Zágoni had maintained a faculty page where he promoted articles skeptical of climate change. [2], [3]

He participated in the Hungarian Academy of Science’s climate change project and was the reporter on three documentary films on that project. [4]

According to Zagoni’s personal page as of August, 2011 he has been a “University lecturer for decades; governmental climate adviser for years;” but has now been “jobless for months.” [5]

“I am positively convinced that the anthropogenic global warming theory is wrong. New developments in the physics of greenhouse effect and radiative transfer show that the accepted theory leads to largely exaggerated global warming projections.” [6]

Zagoni was quoted in a Senate Minority Report used by senator James Inhofe to claim that there were more than “more than 700 international scientists” who dissented with the consensus on climate cange:

“Nature’s regulatory instrument is water vapor: more carbon dioxide leads to less moisture in the air, keeping the overall GHG content in accord with the necessary balance conditions.” [7]

Zagoni was a speaker at the Heartland Institute’s 2008 International Conference on Climate Change on the topic of “Paleoclimatic Consequences of Dr. Miskolczi’s Greenhouse Theory.” [8], [11]

Zágoni often references the work of fellow Hungarian researcher and climate skeptic Ferenc Miskolczi. Conversely, Miskolczi also references Zagoni in some of his articles. Zagoni appears to have switched his views on global warming after reading an article by Miskolczi. [9], [10]

Zágoni appears to have been available for meetings to “explain the work of his colleague Ferenc Miskolczi.” [6]

According to the Heartland Institute, Zágoni has published over two hundred “interviews, papers, and book chapters” on the topic of climate change, most of these in Hungarian.

A search of Google Scholar for Miklós Zágoni returns one article on a philosophical subject, another published in the International Journal of Physics, titled the “Relationship between physical constants and the electron mass,” and several papers published in geophysical journals.