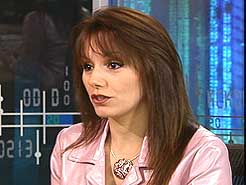 Master’s degree in management from HEC Montréal, with a specialization in applied economics and a thesis on the federal budget deficit. [1]

Nathalie Elgrably-Lévy has been a economics teacher at HEC Montreal since 1992, and is a senior economist and director of the Montreal Economic Institute (MEI).

She is also a columnist for Le Journal de Montréal and Le Journal de Québec and director of TVA Group. In 2008 she worked as a Senior Economist at the Fraser Institute.

“The verdict is simple: there’s been no warming since 1997!…The theory of global warming is dead … a true leader can not ignore it! “(Translated from original) [2]

“Let’s face it, environmentalism became the religion of the twenty-first century!” (Translated from original). [3]

History has shown that we can convince human beings to commit the worst abominations in the name of a cause. The artisans of eco-hysteria population have declared war on the human species. (Translated from original). [4]

In an article titled “The triumph of truth” or “Le triomphe de la vérité,” Nathalie Elgrably-Lévy refers to a group of sixteen “world-renowned researchers” that signed a document urging us “not to panic about global warming” due to a supposed lack of scientific evidence. [2]

She is likely referring to a January 26, 2012 Op-Ed in the Wall Street Journal titled “No Need to Panic About Global Warming.” [5]

Media Matters reported on the WSJ article and found that most of the scientists had not published peer-reviewed research on anything related to climate change.

Nathalie additionally claims that the climate research unit at the University of East Anglia (UEA) released results proving that “there’s been no warming since 1997.  It seems likely that this claim originated from an article in the Daily Mail titled “Forget global warming – it’s Cycle 25 we need to worry about.” [6]

According to the MET Office, the Daily Mail article is wrong. MET concludes that the article “includes numerous errors in the reporting of published peer reviewed science undertaken by the Met Office Hadley Centre and for Mr. Rose to suggest that the latest global temperatures available show no warming in the last 15 years is entirely misleading.” [7]

Apart from her regular columns, Nathalie Elgrably-Lévy has published books including La face cachée des politiques publiques (The hidden face of public policies) as well as the 6th edition of the Quebec version of Microeconomics.

A list of her columns at the Montreal Economic Institute is available here.