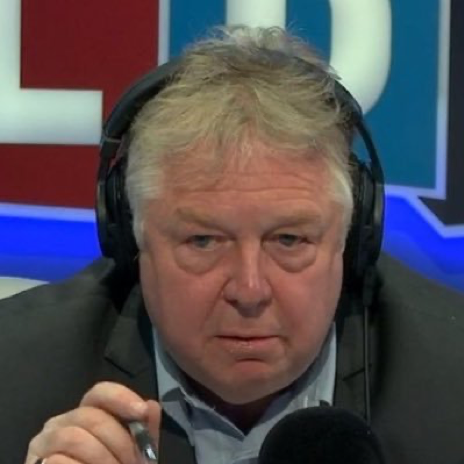 Nick Ferrari is a British radio presenter and journalist. He hosts the weekday breakfast show on LBC and The Pledge on Sky News, as well as writing a regular column in the Sunday Express. [2], [3], [4]

Ferrari began his journalism career as a news reporter for the Sunday Mirror, before working for The Sun, News of the World, and Fox TV. In a 2006 interview with Oliver Duff, he described Rupert Murdoch as “a phenomenal guy to work for” when he was asked who in the media he admires the most. [4]

Ferrari is known for his outspoken style on his 7-10am morning radio show. This has led to a number of controversies including in 2015 when Ferrari described the Paris attacks as a “Muslim problem” and told a caller to “go some place else” if he objected to UK government policy. [5]

Although he has previously accepted that climate change is real, Ferrari is a fierce critic of climate activists, having called protest group Extinction Rebellion “zealots”, “hysterical” and “eco-wackos” and described Greta Thunberg as “just another angry, irrational teenager” in his Express columns. [6], [7]

In February 2020, Ferrari launched a campaign called Enough is Enough to give police more powers to stop public disorder. He said: “it is time to give the police more power to control Extinction Rebellion”. [12]

Ferrari has frequently downplayed the threat of climate change and has been highly critical of climate activists.

Ferrari appeared on the ITV show This Morning to discuss protests by Extinction Rebellion saying they had a “valid argument” but criticised their tactics. [11]

“The UK is responsible for less than 1% of global emissions. The UK has gone further than any other country in the Western world. A 30% drop since 1990. Why are you not protesting in Russia, in China, in Brazil?… You only protest where it’s easy?”

On his morning LBC show in discussion with Paul Stephens, an Extinction Rebellion spokesperson and police liaison officer. On shutting down streets and bringing London to a still stand by protesting, Ferrari asked:

In a Daily Express article on Extinction Rebellion, Ferrari wrote:

“It was another week when the Tristrams and the Tabithas deserted the shires and spent some of their trust fund cash to join the great unwashed, unloved and underemployed to indulge in the ludicrously selfish hissy fit that was the latest Extinction rebellion protest. How dare these zealots risk our safety to indulge their hysterical, misplaced fears about what lies in store? The British government has already pledged to be carbon neutral by 2050, which makes this country a world leader”. [6]

During a discussion on the UK’s greenhouse gas emissions on Sky News’ The Pledge, Ferrari said:

Ferrari wrote an article for The Daily Express criticising the actions of Extinction Rebellion protesters in Cambridge. He stated: “What arrant, uncaring, smug nonsense from these self-styled eco-warriors. Of course, for the Tarquins and Olivias who come down from the shires to cause this mayhem, this is all just a jolly lark and their trust funds will ensure they don’t lose a day’s pay, and the banks to which they belong aren’t to be found on any high street.” [14]

In the Daily Express, Ferrari described Greta Thunberg as “another angry, irrational teenager”. He also talked down the urgency of tackling climate change, writing: “declaring ‘the world is on fire’ and the countdown to eternal damnation has begun is laughable in its over-exaggeration”. [7]

Ferrari blamed Greta Thunberg for “frightening other children” on Sky News’ The Pledge, going on to say: “I did this on my radio show and it’s amazing how many parents are saying their children possibly don’t want children of their own because they think the planet is coming to an end. It’s not”. [10]