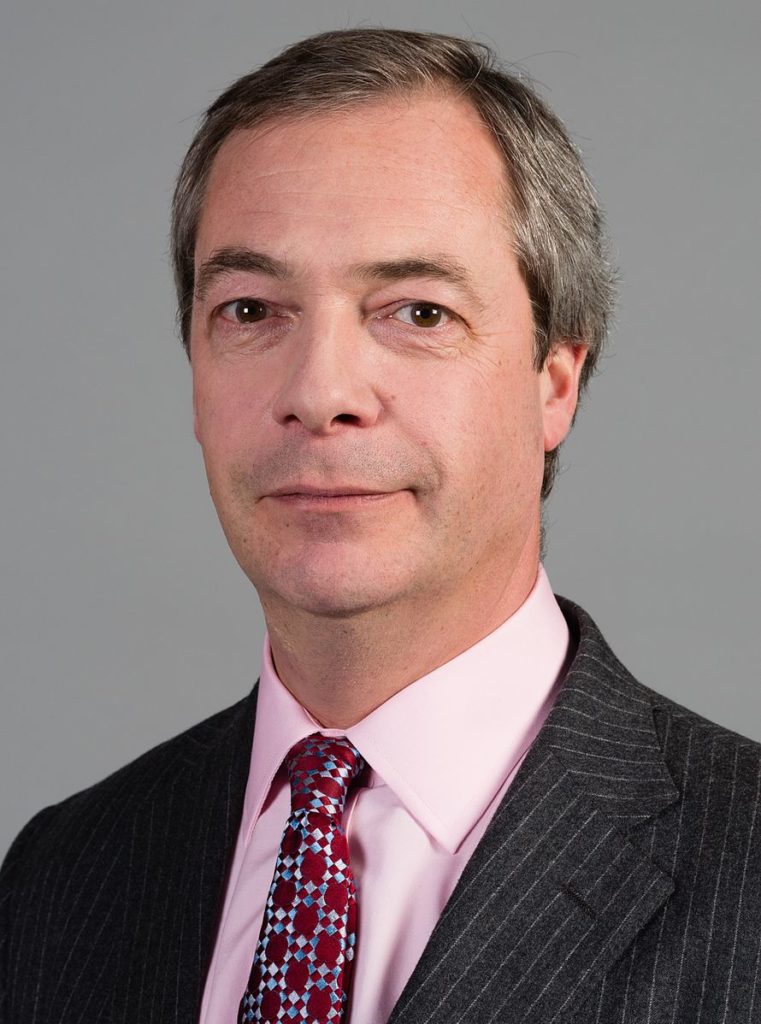 Nigel Farage is the former leader and co-founder of the Brexit Party, which he set up ahead of the European Parliament elections in May 2019 to express “anger” over the fact that Britain had not yet withdrawn from the EU and to “change politics for good.” [24]

Farage was Vice-chairman of Leave Means Leave, a campaign group set up after the EU referendum to advocate a “hard” Brexit. He led the group with Chairman and property investor, Richard Tice and former head of the British Chambers of Commerce, John Longworth. [12]

Other members of Leave Means Leave included figures that have cast doubt on the veracity of climate science and the seriousness of climate change including Owen Paterson, Christopher Chope, Jacob Rees-Mogg and Peter Lilley. [12]

Leave Means Leave was based at 55 Tufton Street, home to several organisations pushing for a hard Brexit as well as the UK‘s principal climate science denial group, the Global Warming Policy Foundation.

UKIP’s party manifestos for the 2015 and 2017 elections both pledged to undo green initiatives, analysis by Carbon Brief showed. In 2015 it stated “the Climate Change Act is doing untold damage. UKIP will repeal it.” It also argued that “coal must be part of the solution” for cheap energy security and that it’s “time to get fracking.” These themes were repeated in 2017 when the party manifesto called again for the UK Climate Change Act to be repealed while pledging to “withdraw from the Paris climate agreement and the EU Emissions Trading scheme.” [5], [6]

UKIP’s primary goal was to seek the UK’s withdrawal from the European Union, and Farage stepped down as party leader following the EU referendum in June 2016, saying his “political ambition [had] been achieved.” During the Brexit campaign, Farage was a leading member of the unofficial pro-Brexit groups Leave.EU and Grassroots Out. [7], [8]

Since then Farage has toured the US and Australia, visiting like-minded conservative groups and appearing as a commentator on Fox News. [9], [10], [11]

Farage left UKIP in December 2018, saying the party’s leader Gerard Batten was “obsessed” with the issue of Islam and the ex-English Defence League leader Tommy Robinson. [25]

Presenting a phone in on LBC during the Davos gathering of world leaders, Farage claimed that Donald Trump was taking a positive approach to climate action and criticised Prince Charles and Greta Thunberg for promoting “alarmism.” [32]

Farage suggested that population growth was the greatest driver of environmental impacts, including carbon emissions, saying: [32]

“The real problem we’ve got here, I’m going to put this to you, in my view, the real problem we’ve got here with loss of habitat, the destructive effects on biodiversity and all of these problems with carbon emissions or whatever else you want to worry about in the world, is simply because the global population is exploding, it’s the biggest problem that we face.” [32]

In an interview with Spiked online: [14]

“I haven’t got a clue whether climate change is being driven by carbon-dioxide emissions.” [14]

“I am not saying that man is having no influence on the climate, although as the years go by it looks increasingly unlikely. To be told that the science is settled [on global warming] is hard to accept. Where I grew up, our back wall joined onto Down House where Charles Darwin wrote [On the Origin of Species] and 150 years on, the science isn’t settled over Darwin and I can tell you science is never settled.” [15]

“It’s odd to focus on carbon dioxide. I’m an environmentalist; I’m against carbon monoxide and sulphur dioxide and toxins in our rivers. Yes, I’m all for pollution controls but to obsess with carbon dioxide, which as I understand it, is a perfectly natural occurring phenomenon, strikes me as strange.” [15]

Speaking in the European Parliament: [16]

“We may have made one of the biggest and most stupid collective mistakes in history by getting so worried about global warming.” [16]

In a speech to the Australian Conservative Political Action Conference reported by the Guardian, Farage made comments about the UK‘s Royal Family, saying: [28]

“When it comes to [the Queen’s] son [Prince Charles], when it comes to Charlie Boy and climate change, oh dear, oh dear, oh dear. Her mother, Her Royal Highness the Queen’s mother was a slightly overweight, chain-smoking gin drinker who lived to 101 years old. All I can say is Charlie Boy is now in his 70s … may the Queen live a very, very long time.”

Commenting on the marriage of Prince Harry and Meghan Markle, he said:

“Terrifying! Here was Harry, here he was this young, brave, boisterous, all male, getting into trouble, turning up at stag parties inappropriately dressed, drinking too much and causing all sorts of mayhem. And then, a brave British officer who did his bit in Afghanistan. He was the most popular royal of a younger generation that we’ve seen for 100 years.

“And then he met Meghan Markle, and it’s fallen off a cliff. We’ve been told in the last week that Meghan and Harry will only have two children … and we’re all completely ignoring, the real problem the Earth faces, and that is the fact the population of the globe is exploding but no one dares talk about it, no one dares deal with it, and whether Prince Harry has two kids is irrelevant given there are now 2.6 billion Chinese and Indians on this Earth.” [28]

“Large parts of central London have no salt on the roads. Perhaps they are all so convinced by global warming they never thought any would be needed.” [17]

Farage joined Amsterdam-based carbon offset company Dutch Green Business, which aims to reduce carbon emissions by planting trees, as an adviser and spokesperson. He told Reuters: “I think people will want to plant trees and increase biodiversity through DGB who are actually quite sceptical about climate change. Equally there will be others who are very concerned about it.” He also said: “If their motivations are more about biodiversity than they are about climate change, so what?” [35]

According to The Guardian, Dutch Green Business is part owned by businessman John Mappin, a supporter of the conspiracy theorist QAnon movement. [36]

Farage stated that his new party, Reform UK, would recruit candidates to stand against “any and every” politician who backed Prime Minister Boris Johnson’s 10-point plan for a ‘Green Industrial Revolution,’ Breitbart reported. Farage also reportedly described Johnson’s policies to convert streets into cul-de-sacs as “madness,” and an opportunity for the government to “virtue-signal and show off its eco-credentials.” [34]

An interview with Farage by talkRADIO’s Mike Graham discussing the 2020 U.S. Presidential election was quoted in The Daily Express. In response to Graham claiming that “in Pennsylvania, Joe Biden’s home state, Biden has said he wants to do away with the oil business and fracking”, and “that is not going to play too well for one of the world’s centres for oil and fracking”, Farage responded: “these are blue-collar jobs, these are communities who traditionally vote Democrat but under Joe Biden they will lose their jobs”, continuing: “I think you are right, I think that is an absolute key for Pennsylvania”. [33]

Farage paid tribute to the late Christopher Booker in an interview with the right-wing website Breitbart, describing how Booker campaigned with him for the UK to leave the European Union in the 1990s. Farage also said during the interview: [29]

“[Booker] questioned whether CO2 was actually leading to climate change, he questioned all the attempts to shut down free speech and open debate.”

Farage launched the Brexit Party ahead of the European Union elections in May. Among the 70 candidates selected to stand was Annunziata Rees-Mogg, sister of the pro-Brexit, climate science denying Conservative MP, Jacob Rees-Mogg. Speaking to BBC Radio 4’s Today programme, Farage said his former party, UKIP, had allowed “the far right to join it and take it over and I’m afraid the brand is now tarnished,” while claiming that there was “no difference” in terms of policy between the two parties. Three UKIP MEPs announced they had defected to the party four days later. [24], [26]

It was announced that Farage would run in the upcoming European Parliament elections for a newly-registered Brexit Party, if Britain had not left the EU by this point. [13]

Farage attended the Republican National Convention during the 2016 presidential race which led to the election of Donald Trump. His goal was to spread the “Brexit gospel,” as Politico reported at the time. “I think there are a lot of Republican strategists who are looking very closely at what we did and how we did it,” Farage told Politico, adding “All I can do is to come and tell my story.” [21]