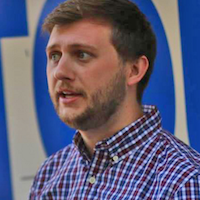 Paul Blair is a “subject expert” for the U.S. Department of Interior’s Royalty Policy Committee (RPC) subcommittee for “Planning, Analysis and Competitiveness.” The RPC advises Secretary Ryan Zinke on “policy and strategies to improve management of the multi-billion dollar, federal and American Indian mineral revenue program.” Blair is a public interest non-voting member with the stated role “to help compile information, conduct research, and to make policy recommendations that benefit American taxpayers.” [1], [2]

The Western Values Project suggested the Royalty Policy Committee’s membership was “slanted in favor of industry.” U.S. News & World Report reported the RPC was “well-represented with energy interests ready to profit from the committee’s recommendations, but lacked any independent taxpayer voice.” [3], [4]

Blair is also listed as the Director of Strategic Initiatives at Americans for Tax Reform (ATR). ATR is a nonprofit 501(c)(4) “taxpayer advocacy group” founded in 1985 by Grover Norquist that “opposes all tax increases as a matter of principle.” Paul Blair is currently registered as a lobbyist for ATR, according to records at the Senate Lobbying Disclosure Act Database filed as recently as 2nd quarter 2018. [5], [6]

According to his ATR profile, Blair works “works with state and federal lawmakers, third party groups and associations, and political committees and PACs to achieve ATR’s tax and regulatory agenda.”

Before joining ATR, he interned at both The Club for Growth and the National Republican Congressional Committee. He also worked as the Virginia field director for Americans for Prosperity (AFP) from 2008 to 2009. [1]

Blair is also a member of the American Legislative Exchange Council (ALEC). He has commented that ALEC is going “center-left” on energy an environment issues. [8]

In addition to regularly publishing articles opposing regulation on tobacco products, particularly e-cigarettes and vaping products, Blair has lobbied on behalf of ATR on H.R.2058 , or FDA Deeming Authority Clarification Act, which involves revising premarket review and reporting requirements for products deemed by the Food and Drug Administration (FDA) to be tobacco products. [9]

@ryanfazio I believe in climate change. You know, like when Spring becomes Summer, Summer Fall, Fall Winter, and Winter Spring.

Blair has been critical of ALEC for going “centre-left” on tax issues, E&E News reported: [12]

“The purpose of this event is to promote and expand energy freedom in the United States, as outlined in President Donald Trump’s bold America First Energy Plan, a proposal first released during the 2016 presidential campaign. The president’s plan marks a decisive change in direction from the Obama administration’s ‘war on fossil fuels’ and focus on the theory of catastrophic man-caused climate change,” the conference description reads. [13]

“Carbon taxes and ‘cap and trade’ schemes, are NOT market-based conservative ideas. They are distortions of the market — a ruse embraced by the environmental left to enact command-and-control policies over our use of energy and the economy as a whole,” the panel description reads. [14]

The Western Values Project reported Blair was one of two new members of the Department of the Interior’s Royalty Policy Committee (RPC) who would be meeting to consider streamlining the permitting process for oil and gas exploration on federal lands. Albuquerque Journal reported that Ryan Zinke had chartered the committee, and that the group’s subcommittees had already held dozens of meetings behind closed doors. [3], [15]

“We have a lot of concerns about the committee’s entire process, which is opaque and completely nontransparent,” Eaton told the Journal’s editorial board. “It’s energy recommendations are wholly consistent with the agenda of oil and gas companies.” [15]

Blair appeared on the Heartland Institute’s daily podcast to criticize a loan program for individuals to install solar panels on low income homes. Audio below. [16]

Blair was registered as a speaker at the Global Tobacco & Nicotine Forum (GTNF) 2017. “Leaders from the tobacco and nicotine industries come together with media commentators, government officials responsible for regulations, and representatives of NGOs, the public health community and the financial sector,” reads the event description. [17]

Blair was the campaign manager of ATR‘s “Right to Vape Tour” which was organized by ATR, Consumer Advocates for Smoke-Free Alternatives Association (CASAA), and the American Vaping Association (AVA) to oppose the FDA‘s proposed rules on vaping. Blair also spoke on a Heartland Institute podcast about the tour: [18], [19]

Paul Blair regularly publishes commentary critical of renewable energy and critical of any taxation on tobacco or e-cigarettes. Below are some samples from the Americans for Tax Reform website. [20]