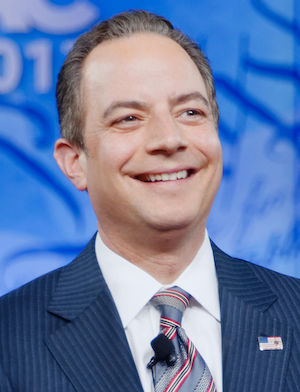 Reinhold “Reince” Priebus was the White House Chief of Staff, appointed by President Donald Trump on 13 November 2016 until July 28, 2017 when he was replaced by John F. Kelly. In his position, he was previously “in charge of day to day operations,” he told Fox News, as well as acting as a top adviser to Trump. [3], [4], [36]

After successfully cutting the RNC‘s debt, Priebus was elected to serve another term on 25 January 2013. When he was elected for a third term on 16 January 2015, he became the longest serving chairman in history, according to the GOP website. [5], [6], [35]

He is known for working to bring Wisconsin’s Tea Party movement together with the more mainstream Republican party, easing conflicts between the two parties. In his first press conference as chairman, he was asked about the Tea Party: “I’m part of the grass-roots movement,” he said. “One of the things I’ve said is that our party is part of the conservative movement in this country. We’re not in competition with it; we’re going to do it right.”  [7]

Mark Block, former state director of the Wisconsin chapter of AFP, praised Priebus in a Daily Caller op-ed, noting he had supplied a 2009 AFP rally with transportation and GOP staff support “for the movement of an enormous number of Tea Party activists from the outskirts of Madison to the rally site on the steps of the State Capitol, where over 8,000 people gathered.” [9]

In addition to this, according to Alternet, Priebus was allegedly involved in a “Voter caging” effort coordinated with the Wisconsin Tea Party group GrandSons of Liberty and assisted by AFP. [10]

The Center for Media and Democracy’s PR Watch described Priebus’s appointment as Chief of Staff as a “win for the Koch wing of the Republican Party,” noting Priebus’ long-held connections to Speaker of the House, Paul Ryan. In 2011, the Washington Post described Priebus, Paul Ryan, and Scott Walker as “not only friends but political soul mates.” [11], [12]

Christopher Ruddy, Newsmax Media CEO and friend of Donald Trump, told The Washington Post, “I think on paper Reince looked good as the chief of staff — and Donald trusted him — but it’s pretty clear the guy is in way over his head. He’s not knowledgeable of how federal agencies work, how the communications operations work. He botched this whole immigration rollout. This should’ve been a win for Donald, not two or three weeks of negative publicity.” [14]

“Democrats tell us they understand the world, but then they call climate change, not radical Islamic terrorism, the greatest threat to national security. Look, I think we all care about our planet, but melting icebergs aren’t beheading Christians in the Middle East.” [16]

Reince Priebus spoke alongside Trump’s top strategist, Steve Bannon, at the 2017 Conservative Political Action Conference (CPAC). Huffington Post reported that Priebus “laughed off reports of a power struggle betwen themselves, complimenting each other in their respective roles in the White House.”

Speaking on Fox News Sunday with Chris Wallace, Reince Priebus said there was no cooperation between the Trump campaign and Russia prior to the election, after a New York Times  report the week prior claimed otherwise. Full video below. [19]

“I can assure you – and I’ve been approved to say this – that the top levels of the intelligence community have assured me that that story is not only inaccurate but it’s grossly overstated and it was wrong,” Priebus said. He added that “They have made it very clear that that story in The New York Times is complete garbage.”  [19]

He did not clarify who the “they” were in that statement, saying he did not have permission to give names.  [19]

Huffington Post also noted that Priebus defended Trump’s statements that the media was “the enemy of the American people” in a tweet Trump had sent the prior week. [20]

Reince Priebus went on Fox News Sunday to discuss Donald Trump’s “major flips on policy” including the potential for the U.S. pulling out of the Paris Agreement.  In a New York Times interview shortly before, Trump had said that he had “an open mind” to the Paris agreement. [21]

However, ThinkProgress reported that Trump had not been entirely forthright with the Times. Priebus told Wallace: [22]

“There are basically two things that I want to make really clear, as for myself as your speaker,” Ryan said in the recording. “I am not going to defend Donald Trump — not now, not in the future. As you probably heard, I disinvited him from my first congressional district GOP event this weekend — a thing I do every year. And I’m not going to be campaigning with him over the next 30 days.” [24]

Politico noted that the recording was made shortly after the “Access Hollywood” video, where Trump had bragged about his sexual exploits was aired. [25]

“The world is well aware of this history,” Ryan spokesman Brendan Buck responded to Breitbart “And obviously a lot has happened since then. As everyone knows.” [25]

The RNC sued the Federal Election Commission (FEC), requesting the ability to raise unlimited cash from individual donors similar to Super PACs. Previously, the RNC could accept a maximum of $32,400 annually from donors, and $10,000 from local-level parties AP reported. [26]

“The patchwork of limits on political speech undermines the First Amendment and puts high transparency, full-disclosure groups like the RNC on an unequal footing with other political entities,” RNC Priebus said in a statement. “We are asking that political parties be treated equally under the law.”  [26]

Opponents of the RNC worried that individual donors could gain significant power if the court sided with the GOP:  [26]

“If the RNC is successful, we will again see party committees brazenly soliciting $1 million contributions from wealthy contributors seeking to directly purchase influence over candidates and officeholders, with the party committees acting as the sales agent,” said Lawrence Noble, former counsel to the FEC and current adviser at the Campaign Legal Center.   [26]

Politics USA wrote, “The point of this lawsuit is to let the Koch brothers, and other right wing billionaires, directly buy the RNC. Of course, Republicans don’t want the world to know that they are owned by a few billionaires, so they are opposed to any actual transparency, but they definitely want those Koch dollars.” [27]

“Despite the need for domestic energy, he [President Obama] closed federal lands to drilling and mocked those who call for more oil production,” Priebus wrote.

“He killed the Keystone XL pipeline project, blocking an affordable, reliable source of energy—and jobs. Now, that oil will likely be sold to China instead of the United States. And we will continue to import from unstable regions in the world instead of Canada.

“The president should welcome Keystone. He should open up energy production onshore and offshore, and he should end his efforts to increase taxes and onerous regulations on American energy.

“Obama’s decisions have cost us—and not just at the pump. With the stimulus, he gambled billions in taxpayer money on green energy companies like Solyndra, the now-bankrupt California-based solar energy company. Solyndra’s bankruptcy has left taxpayers on the hook for over half a billion dollars and put 1,100 employees out of work.

“For three years, the president has done nothing meaningful to keep energy prices low, and now that Americans are feeling the pain at the pump, they are rightfully going to hold him accountable.”

DeSmog noted that “Not only are these allegations simply not true, they also demonstrate a complete lack of knowledge about oil and gas prices […]  The claims made by Preibus – that Obama has been hostile towards the oil industry and is restricting drilling – have been debunked by media outlets across America.” [29]

Priebus was copied on an email (PDF) from Nick Ayers of the RGA to Wisconsin Governor Scott Walker that was part of a collection of approximately 1,500 emails released as part of the Wisconsin John Doe II investigation, and reported on at The Guardian. [30], [31]

The email proposes an election strategy coordinated with outside spending groups including the RGA, the Republication State Leadership Committee, Americans for Prosperity, and the Club for Growth. [31]

One Wisconsin Now reported that the RNC, led by Priebus, had been working to “suppress the vote in minority voting precincts in Milwaukee that involved Priebus.” This “Voter caging” effort was led by the Wisconsin Tea Party group GrandSons of Liberty and assisted by AFP. [10]

The Brennan Center for Justice describes voter caging as follows: [32]

“Voter caging is a tactic that jeopardizes eligible citizens’ ability to vote. The process involves efforts to identify and disenfranchise improperly registered voters solely on the basis of an undeliverable mailing. The most common method involves three steps:  [32]

– send mail to addresses on the voter rolls,

– compile a list of the mail that is returned undelivered, and

– use that list to purge or challenge voters’ registrations on the grounds that the voters on the list do not legally reside at their registered addresses. “

Image of Reince Priebus by Michael Vadon – image has been cropped from original (Flickr) [CC BY 2.0 (http://creativecommons.org/licenses/by/2.0)], via Wikimedia Commons