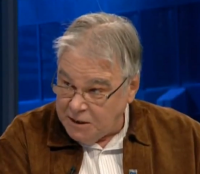 Reynauld Du Berger is emeritus professor of geophysics at the University of Quebec at Chicoutimi. His background is in geological engineering and seismology. [3]

Du Berger’s research interests while working at the University of Quebec were in the fields of applied seismology and ground water geophysics. [4]

He currently runs the blog, Le Blogue de Reynald Du Berger which covers “climate, science, and society.” Du Berger is skeptical of climate change, and questions the validity of the IPCC.  [5]

Du Berger was listed as one of several “ambassadors of the European Climate Declaration,” an open letter created by the then-recently-formed group titled CLINTEL (The Climate Intelligence Foundation). [14]

That open letter, addressed to the Executive Secretary of the United Nations Framework Convention on Climate Change, claimed “there is no climate emergency.” It is repoduced below. (The declaration and its attached claims has been debunked by the scientists at Climate Feedback).

“There is no climate emergency
A global network of 500 scientists and professionals has prepared this urgent message. Climate science should be less political, while climate policies should be more scientific. Scientists should openly address the uncertainties and exaggerations in their predictions of global warming, while politicians should dispassionately count the real benefits as well as the imagined costs of adaptation to global warming, and the real costs as well as the imagined benefits of mitigation.

“Natural as well as anthropogenic factors cause warming
The geological archive reveals that Earth’s climate has varied as long as the planet has existed, with
natural cold and warm phases. The Little Ice Age ended as recently as 1850. Therefore, it is no
surprise that we now are experiencing a period of warming.

“Climate policy relies on inadequate models
Climate models have many shortcomings and are not remotely plausible as policy tools. Moreover, they most likely exaggerate the effect of greenhouse gases such as CO2. In addition, they ignore the fact that enriching the atmosphere with CO2 is beneficial.

“CO2 is plant food, the basis of all life on Earth
CO2 is not a pollutant. It is essential to all life on Earth. Photosynthesis is a blessing. More CO2 is beneficial for nature, greening the Earth: additional CO2 in the air has promoted growth in global plant biomass. It is also good for agriculture, increasing the yields of crops worldwide.

“Global warming has not increased natural disasters
There is no statistical evidence that global warming is intensifying hurricanes, floods, droughts and suchlike natural disasters, or making them more frequent. However, CO2-mitigation measures are as damaging as they are costly. For instance, wind turbines kill birds and bats, and palm-oil plantations destroy the biodiversity of the rainforests.

“Climate policy must respect scientific and economic realities
There is no climate emergency. Therefore, there is no cause for panic and alarm. We strongly oppose the harmful and unrealistic net-zero CO2 policy proposed for 2050. If better approaches emerge, we will have ample time to reflect and adapt. The aim of international policy should be to provide reliable and affordable energy at all times, and throughout the world.”

“I maintain my opinion on the oil sands. Environmental damage created by their operations are minor and insignificant compared to the benefits derived…” (Translated from the original with Google Translate). [7]

Laval University terminated the Reynald Du Berger Scholarship for Public Purposes due to comments that Du Berger had made at his blog relating to Islam. [15]

“After verification and analysis, Laval University concluded that the donor’s public comments were contrary to his values ​​of respect and inclusion,” Laval University spokesperson Andrée-Anne Stewart commented.

Du Berger said in defense: “I say, as I wrote on my blog, my right to publicly criticize the doctrine of Islam and if there is someone who wants to deny me that right, he will have to look at me.”

Du Berger has said he is worried about what he has described the “of Islamization from Europe to America.”  He later went to Twitter, and commented “I made a five-year commitment to the Université Laval Foundation to offer a $ 1,000 annual scholarship to a student in geology or geological engineering. Until now I was proud of my alma mater.” [16]

On November 5, Du Berger went on radio to argue that he has a right to criticize religion. [17]

Du Berger was signatory to an open letter to Patricia Espinosa Cantellano, Executive Secretary of the United Nations Framework Convention on Climate Change claiming “there is no climate emergency.” [14]

The letter describes itself as the European Climate Declaration and claims to represent “A global network of more than 500 knowledgeable and experienced scientists and professionals in climate and related fields.” [14]

Du Berger is listed as one of fourteen “ambassadors of the European Climate Declaration” with others including Viv Forbes, Richard Lindzen, and Christopher Monckton. [14]

We urge you to follow a climate policy based on sound science, realistic economics and genuine concern for those harmed by costly but unnecessary attempts at mitigation.”

The letter appears to have been organized by Guus Berkhout, the leader of a European climate change denial group CLINTEL (The Climate Intelligence Foundation).

Du Burger spoke at an event hosted by Équipe Autonomiste (“Team Autonomist”), a group that some have described as the new center-right political party in Quebec. [8], [20]

He was described as a “fervant critic of the climate changes theory [sic],” and delivered a short speech discussing what he believed is a lack of proper education regarding climate change. [8]

Du Berger was invited to repeat his presentation at a conference lunch, but was later rejected as a teacher contended his work would conflict with their course on Climate and Biodiversity.

After another of his presentations was cancelled, Du Berger’s appeared on Mario Dumont‘s television talk show to discuss how this was an example of the supposed censure of climate change skeptics.

Du Berger wrote an open letter to one of the Colleges who cancelled his climate change talks.

An excerpt (translated from Berger’s blog):

“I wish to expose your students and your teachers to these facts, observations and many others, tell them about the methods used by the IPCC‘s climate models to build, draw their attention to the weaknesses and shortcomings of models GCM thus generated, to explain the complexity of climate phenomena and the impossibility at the present state of our knowledge, to extract convincing evidence of any significant human influence through all the natural causes which govern the evolution of Earth’s climate. You deny me this privilege and I regret it.” [10]

Du Berger appears to be behind a petition against the Kyoto Protocol. In four months the petition appears to have received five signatures as of 2012. [19]

Based on comments at his blog, Du Berger appears to be Pro- Hydraulic Fracturing (Fracking).

He has written about his frustration with environmental studies required before developing new shale deposits. [11]

Reynald Du Berger was a guest (PDF) at one of the first conferences hosted by Freedom-Quebec Network (Réseau Liberté-Québec or RLQ). [1]

He co-hosted the workshop on climate-skepticism with Jacques Brassard who contends that the event will “provide a forum…perfect for holding an important speech that the media elite traditional refuses to release” and which will “undermine theories of global warming and challenge the influence of environmental groups in Quebec” (Translated from the original with Google Translate).

RLQ has been described as “Quebec’s Tea Party,” [12] and has received support from the Fraser Institute, which has in turn received funding from Koch Industries, ExxonMobil, and numerous tobacco companies. [13]

Ezra Levant, another guest of the RLQ, recently published Ethical Oil, a book on the supposed virtues of the Alberta tar sands.

A search of Google Scholar returns six results for Reynald Du Berger, all in the area of seismology. He does not appear to have published research in peer-reviewed journals on the subject of climate.