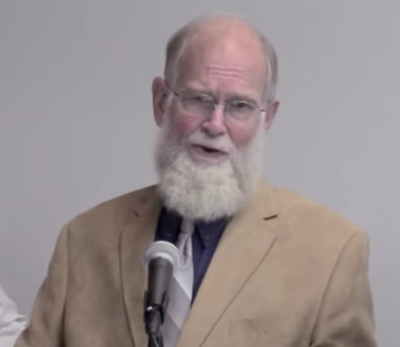 Richard A. Keen was instructor emeritus at the University of Colorado Department of Atmospheric and Oceanic Sciences (ATOC). Keen passed away on January 25, 2020. Some sources have also described him as a “climatologist,” and others as a “meteorologist.” [2], [32], [3]

According to Keen, he had experience as a meteorologist in the army and had “done some climate modeling when I was younger and less wise.” He does not mention receiving any training as a climatologist. [4]

He was the author or co-author of numerous books including Skywatch West: The Complete Weather Guide and The Audubon Society Pocket Guide to Clouds and Storms.

“Half or more of the warming since 1995 may due to the lack of large volcanic eruptions. […] The remaining climate change is presumably caused by other forces, such as solar variability, El Nino, Atlantic AMO warming in 1995, lower Albedo and maybe even a little greenhouse gas.” [5]

“Since the total direct impact of Carbon on climate is 0.2C, and US carbon production is no longer rising, controls such as Cap ‘n Trade and Kyoto are ineffective solutions that will fail to solve a non-existent problem.” [4]

“”Earth has cooled since 1998 in defiance of the predictions by the UN–IPCC… . The global temperature for 2007 was the coldest in a decade and the coldest of the millennium … which is why ‘global warming’ is now called ‘climate change.’” [6]

Keen presented at the Heartland Institute’s live-stream rebuttal to the UN’s 68th Civil Society Sustainability Conference, which was being held in Salt Lake City, Utah. The panel discussion also featured talks by James Taylor, Howard Hayden, and Paul Driessen, among others. [31]

According to the live-stream’s YouTube description, the event was organized to “show how the collectivist climate and sustainability programs promoted by the U.N. would cause more harm than good, especially for the world’s poorest and most disenfranchised people.” [31]

“So enjoy the climate while it lasts and make enough CO2 to feed a tree, which is what CO2 does. It helps plant life and increases crops.” [31]

Keen was among a group of climate change deniers who responded with their own open letter, calling for the AMNH “not to cave in to this pressure.” The letter was signed by numerous individuals with ties to groups funded by the Mercer Family Foundation such as Will Happer of the CO2 CoalitionRichard Lindzen, a fellow at the Cato InstituteCraig Idso, the chairman of the Center for the Study of Carbon Dioxide and Global Change. There are a number of signatories affiliated with the Heartland Institute, which has received over $5.78 million from the Mercer Family Foundation since 2008. [29]

Richard Keen was a signatory of a petition (PDF) organized by Richard Lindzen of the Cato Institute urging President Donald Trump to pull the United States out of the United Nations international convention on climate change (UNFCCC). [23]

DeSmog investigated the list, and found that only a small handful of the signatories could be considered “even remotely ‘qualified’ or ‘eminent’ — but not in the field of climate science.” The list included individuals “interested in climate,” and one signatory who only identified as an “emailer who wished to sign the petition” while some signers provided no affiliation or address whatsoever. [24]

Richard Keen was a speaker at the Fourth Santa Fe Conference on Global & Regional Climate Change. According to the conference program (PDF), Keen’s speech was titled “Volcanic Aerosol forcing of the Global Climate from Lunar Eclipse observations.” [19], [20]

The Fourth Santa Fe Conference was sponsored by the Los Alamos National Laboratory’s Center for Earth and Space Science and co-sponsored by American Meteorological Society. [21]

It was the fourth in a series of conferences with the stated purpose of bringing together researchers “with varied interpretations of current and past global and regional climate change, to present the latest research results (observations, modeling and analysis), and to provide speaking and listening opportunities to top climate experts and students.” The first conference took place in Halifax, Nova Scotia, in 2001. Both the second and the third were in Santa Fe, New Mexico, in 2006 and 2011 respectively. [21]

Richard Keen was in the Vatican City, Italy, for a press event hosted by the Heartland Institute in order to “dissuade Pope Francis from lending his moral authority to the politicized and unscientific climate agenda of the United Nations,” according to a Heartland Institute press release.

DeSmogUK attended the event and noted that “just nine journalists made up the audience at Heartland’s press conference”:

Richard Keen was a panelist at the Heartland Institute’s Ninth International Conference on Climate Change (ICCC9) in Las Vegas, Nevada. [15] He spoke on Panel 15: “How Reliable Are Temperature Records? Is Global Warming Rapid and Dangerous?” with Norman Rogers, Anthony Watts, and Larry Gould.

Panel 15: How Reliable are Temperature Records? Is Global Warming Rapid and Dangerous?

Richard Keen was a speaker at the Heartland Institute‘s Seventh International Conference on Climate Change (ICCC7). [7]

His speech, titled “The Pacific Decimal Oscillation and Global Climate Models” can be viewed below.

Richard Keen was one of fourteen Amici, described as “well-qualified climate scientists,” who claimed that the “EPA‘s endangerment finding is not ‘rational’ and therefore arbitrary and capricious.”[18]

According to the petitioners, representing the Coalition for Responsible Regulation, Inc.:  [18]

“[T]he Earth’s climate is not changing in an unusual or anomalous fashion. The EPA relied on instrumental data that were adjusted to exaggerate the increase in global temperatures.” [18]

Presented at the 28th Annual Meeting of the Doctors for Disaster Preparedness (DDP) in Orlando, Florida. His presentation was titled “It’s the Data, stupid! What’s wrong with global warming.” [4]

Speaker at the Doctors for Disaster Preparedness 27th Annual Meeting in Denver, Colorado. His presentation was titled “Volcanoes, Stars, and Gases, oh My! What’s changing our climate?” [8]

Keen was a speaker at the Heartland Institute‘s Second International Conference on Climate Change (ICCC2). His talk was titled “Volcanoes and Climate Change Since 1980: A View from the Moon.” [9]

Keen’s signature was appended to a Cato Institute advertisement that criticizes comments made by President-Elect Barack Obama which had listed climate change as an urgent issue.

The ad states “We, the undersigned scientists, maintain that the case for alarm regarding climate change is grossly overstated. Surface temperature changes over the past century have been episodic and modest and there has been no net global warming for over a decade now… .Mr. President, your characterization of the scientific facts regarding climate change and the degree of certainty informing the scientific debate is simply incorrect.” [10]

“Dr. Richard Keen’s ‘Global Warming Quiz‘” was posted on Roger Pielke‘s web blog and hosted at the skeptical ICECAP website (PDF). The quiz’s closing remark is “Enjoy the warm climate while it lasts, and please make enough CO2 to feed a tree.” [11]

According to some sources, Keen had committed “blatant cherry picking of historical data with a collection of historical examples of warm periods and extreme weather events” in his interpretation of the Science. [12]

According to a search of Google Scholar, Richard A. Keen has published less than five articles in peer-reviewed journals on the subject of climate. Not all of those articles were directly related to climate change, and many were published over 20 years ago. It is also unclear whether all of his following articles were peer-reviewed: