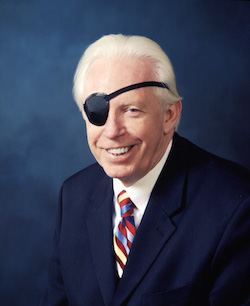 Richard Rahn is an economist and the current chairman of the Institute for Economic Growth (IGEG). He sits on the advisory boards of numerous think-tanks and advocacy groups. Rahn is also the founder of Novecon companies, and currently sits as the chair of Novecon Financial Ltd. [2]

According to his profile at the IGEG, Rahn served for two terms (2002-2008) as the first non-Caymanian member of the Board of Directors of the Cayman Islands Monetary Authority. In the 1980s he was the vice president and chief economist of the Chamber of Commerce of the United States, executive vice president and board member of the National Chamber Foundation, and the editor-in-chief of the Journal of Economic Growth. [3]

In 1990, Dr. Rahn founded the Novecon companies including Sterling Semiconductor (now owned by Dow Corning) and he still serves on the boards of private companies. [3]

He was the executive director of the American Council for Capital Formation. In 1990-1991, he served as the U.S. co-chairman of the Bulgarian Economic Growth and Transition Project. In 1982, President Reagan appointed Dr. Rahn as a member of the Quadrennial Social Security Advisory Council. During the 1988 Presidential campaign, he served as an economic advisor to President G.H.W. Bush. [3]

The American Council for Capital Formation (ACCP) is a DC-based free market think tank that has received over $1.6 million from oil-giant ExxonMobil. [4]

Rahn is listed on the ACCF board as of 2019 along with four other directors including ACCF president and CEO Mark A. Bloomfield and Susan K. Neely of the American Beverage Association. [7]

“Despite the prediction of all the major climate models, the Earth has been getting cooler since 1998.” [8]

Rahn was a speaker at the Heartland Institute‘s First International Conference on Climate Change (ICCC1). [10]

According to a search of Google Scholar, Richard W. Rahn has published some articles in economics journals, however he has never published in a peer-reviewed scientific journal in any area directly related to climate change.