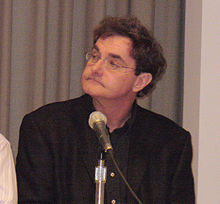 Ronald Bailey is a science correspondent at Reason Magazine, writing a weekly science and technology column. He is also a “Media Fellow” and adjunct scholar at the CATO Institute, where he is described as an “expert on environmental policy and the relationship between science and public policy.” [2] , [3] , [4] Bailey formerly served as an adjunct analyst at the Competitive Enterprise Institute. [5]

Bailey is the author of ECOSCAM: The False Prophets of Ecological Apocalypse, as well as the editor of Global Warming and Other Eco-Myths: How the Environmental Movement Uses False Science to Scare Us to Death and The True State of the Planet. [2]

Ronald Bailey was a Science and Technology staff writer for Forbes from 1987-1990 and “his articles and reviews have appeared in The New York Times, The Wall Street Journal, The Washington Post, Commentary, The Public Interest, Smithsonian, TechCentralStation, National Review, Reader’s Digest and many other publications.” [2]

“And on the climate change issue, just a little anecdote, when I first heard about this was when I was working at Forbes Magazine, and somebody was saying, well, they’re claiming that we’re going to warm up the climate, and it’s going to get up to about nine degrees warmer. And I turned to the person and I said, you mean that we’ll be able to have palm trees growing down Fifth Avenue in New York now? And I didn’t see this was a particular problem.” [6]

“Government agencies, from worldwide to regional organizations, have been developed to deal with the policy concerns raised by the greenhouse issue. Many of these government groups have expanded in recent years, and their fate is tied to the perception that global warming represents a significant threat to the planet. Bureaucratic inertia virtually guarantees that the greenhouse question will remain high on the list of environmental policy priorities. Despite the evidence reviewed in this chapter, the upcoming versions of the various IPCC reports will continue to trumpet the threat of global warming. Press releases will probably emphasize the risks of the greenhouse effect while remaining silent about the potential benefits of the greenhouse world.” [7]

“I read The Population Bomb and The Limits to Growth, two of the three seminal texts of modern environmental apocalyptics, my first year at the University of Virginia in 1972. The third text, Silent Spring, I read while in secondary school. These books profoundly disheartened me and many of my generation because they painted the near future—our future—in hopelessly bleak terms.

These gloomy books sold in the millions, and they have dramatically skewed public policy for the past two and a half decades, slowing economic growth and unnecessarily increasing human misery. Even now a new generation of doomsters is flooding our schools and universities with more dire predictions of imminent global disaster. For example, neo-Malthusian Lester Brown’s annual State of the World is used in more than five hundred college courses, and our primary and secondary schools are being flooded with Environmentalist propaganda.

In this book I hold those environmental alarmists strictly accountable for their faulty analyses, their wildly inaccurate predictions, and their heedless politicization of science, in the hope that the next generation will not grow up feeling that their future is dismal and blighted. This book demonstrates the reality of human progress, and I hope it will thereby help restore the next generation’s belief in the future.” [8]

“So if we don’t want to perpetuate poverty in the name of preventing climate change, geoengineering may be our way out. Why? Because geoengineering would provide more time for the world’s economy to grow while inventors and entrepreneurs develop and deploy new carbon neutral energy sources to replace fossil fuels … It seems unlikely that fast-growing poor countries like India and China will agree cut back on their use of fossil fuels any time soon. If that’s the case, then emissions reductions in rich countries would have almost no effect on future temperature trends. Geoengineering could give humanity more time to resolve this collective action problem, too.” [9]

According to the GWPF’s event description, “Bailey provides a detailed examination of the theories, studies, and assumptions currently spurring forecasts of calamity and shaping environmental policy.” Bailey suggests that we should not opt for “paralyzing regulation,” and that “economic and technological development” is all that is needed to avoid future calamity. [11]

Ronald Bailey published a book titled The End of Doom: Environmental Renewal in the Twenty-first Century  in which he says that “the [climate] models are running hotter than actual temperatures.”  The book was funded by a grant provided by the Cato Institute.  [10]

Ronald Bailey testified before a United States congressional committee on “The Impact of Science on Public Policy,” “on how and why environmental predictions have gone wrong.” [3] Bailey said to “have patience” and “the scientific process and peer review will eventually point us to the truth.” He continued: “Finally, it should be clear that environmentalist advocates keep making the same mistake over and over: They constantly underestimate the power of technology and science, and underestimate the power of markets to solve emerging problems.” [3]

According to a search of Google Scholar, Ronald Bailey has not published any research on climate science in peer-reviewed journals.

View an ongoing archive of Ronald Bailey’s writing on Reason.com.