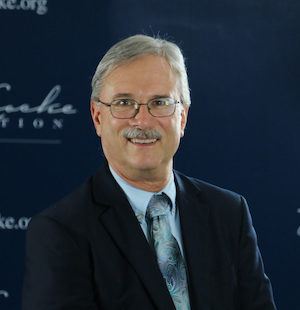 Roy Cordato’s is retired senior economist, and vice president for research at the John Locke Foundation. He retired from his full-time position at JLF in June 2019. [1], [4]

He was the Lundy Professor of Business Philosophy at Campbell University in Buies Creek, North Carolina from 1993 to 2000. He was senior economist at the Institute for Research on the Economics of Taxation (IRET) from 1987 to 1993. [4]

Cordato also worked as a full-time economics professor at the University of Hartford and at Auburn University, and as adjunct faculty at Johns Hopkins University. [4]

DeSmog reported in 2007 that Cordato became one of those “duped” by promoting a climate research paper that was proven to be a hoax. His background is in music and economics, however has regularly commented on climate change issues. [7], [8]

Cordato declared on an episode of the John Locke Foundation’s Carolina Journal Radio:

“You look at the models used to predict future warming, and you take those models and go back one hundred years and plug in the data and predict the warming we have today, they way overpredict. They’re totally wrong with respect to the amount of warming we’ve had in the past one hundred years. And we see this over and over and over again. Hyperbole, using hysteria to get through a particular policy agenda.” [2]

“It seems quite clear. Seems to be absolutely no disagreement on this. There is no policy regarding CO2 reductions that North Carolina could implement that would have any impact on the climate for now or the next several centuries.

“And, the fact is, is that even if they implemented these policies in conjunction with every other state, and even every other nation in the world, there still wouldn’t be a measurable impact globally

“I think what the state should do is, first of all, acknowledge this in a report that we looked at this, we looked at the science and scientists agree, or disagree rather, on the extent of future global warming. But there is one area where they all seem to agree and that is, is that nothing the state is considering will have any impact on the climate. What we should then do is look at ways that we can strengthen the economy, which is how we will be able to deal with whatever happens in the future in terms of climate.

“Historically we have dealt with climate issues extreme weather, extreme heat extreme cold through a capital stock and growth of the economy and prosperity, which has brought us air conditioning and central heating, and all the good things that we have now that they didn’t have 100 years ago to shelter us from the vagaries of weather.”

In an article in the Carolina Journal, Cordato said public concern over global warming had been declining:. [3]

“Now polls show people are more likely to believe there are ghosts or that aliens will attack the Earth,” Cordato claimed.

Cordato was a speaker at the Heartland Institute’s First International Conference on Climate Change. His speech was titled “Cap and Trade, Carbon taxes, and the Myth of Efficient CO2 Reduction”:

According to Google Scholar, Cordato has not published any articles on the subject of climate change in peer-reviewed journals.

One of Cordato’s articles for The Freeman gives a positive review of Climate Confusion. The book is authored by Roy Spencer and sets itself apart by “forsaking blindingly technical statistics” and describing issue of climate change in “simple terms.”