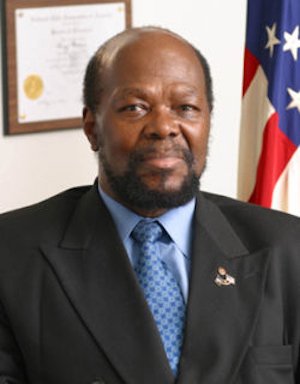 Roy Innis claimed that his experience of climate science came from being “exposed to climate variation dynamics while a student in chemical engineering at the City College of New York.” [1]

Roy Innis was the National Chairman and CEO of the Congress for Racial Equality (CORE), a New York-based civil rights organization. Roy Innis passed away on January 8, 2017. [1], [13]

According to his bio at the Congress for Racial Equality (CORE), Innis entered a four-year program in chemistry at City College of New York and held positions as a research chemist at Vick Chemical Company and Montefiore Hospital. [13]

CORE‘s mission is to “establish, in practice, the inalienable right for all people to determine their own destiny – to decide for themselves what social and political organizations can operate in their best interest and to do so without gratuitous and inhibiting influence from those whose interest is diametrically opposed to theirs.” [2]

Since 2002, CORE has received $325,000 from oil-giant ExxonMobil for work related to activities described as “climate change outreach” and “change regulation/legislation.” [3]

A 1996 New York Times article described CORE as “one of the leading voices of the small but growing number of black conservatives in the United States.” [4]

The original founder of CORE, James Farmer, described CORE in 1993:

“CORE has no functioning chapters; it holds no conventions, no elections, no meetings, sets no policies, has no social programs and does no fund-raising. In my opinion, CORE is fraudulent.” [5]

The New American quoted Roy Innis, who had spoken at CORE‘s 2009 Conference in New York City:

“A lot of people are searching for the right thing to believe in and [have been] captured by a corrupted ideology, a ‘green’ religion,” Innis said. “’Coal and natural gas are the new civil rights battleground […] because without these sources, “we” cannot enjoy this great society.’” [6]

In a February 2008 article Innis wrote:

“Energy Killers justify these demands by pointing to computer models that conjure up disaster scenarios in which rising carbon dioxide causes icy habitats to melt 50-100 years from now, driving polar bears to extinction. However, hundreds of climate scientists emphasize that these models can’t forecast accurately even one year in advance, much less 50. They say there is no evidence that Earth’s moderate warming of the past century will turn into a disaster, or that CO2 is the primary cause of climate change.” [7]

Roy Innis presented at the Heartland Institute’s 2009 International Conference on Climate Change (ICCC2) the topic of “The Morality of Energy Rationing.” [1]

DeSmogBlog found that the event’s sponsors in 2009 had collectively received over $47 million from oil companies and right-wing foundations.

CORE co-organized a campaign in December 2008, with the conservative value group High Impact Leadership Coalition (HILC) titled “Don’t Freeze Us Out.” The campaign was a response to Robert Redford’s opposition of oil and gas rights auctions (some near national parks) in Utah. Redford had used his celebrity to oppose a sale which he described as “morally criminal” in intent.

CORE‘s campaign promised to “organize churches, civil rights groups, consumer groups and others ‘to fight Redford and self-styled environmental groups that are working to constrict supplies of natural gas and other energy resources.’” [8]

CORE organized a pro-drilling campaign titled “Stop the War on the Poor” in 2008, in conjunction with the HLC, as well as the front-group Americans For American Energy.

The goal of the campaign was to increase domestic oil and gas production, with the expectation of reducing the cost of fuel for low-income families.

Innis spoke at the Heartland Institute’s first International Conference on Climate Change (ICCC1) on the topic of “Climate Change Economics.” View video below. [14]

According to an archived version of CORE‘s website the pro-GM food campaign was sponsored by ag-food and pesticide giant Monsanto. Here is a screen capture of the CORE site in 2005 where Monsanto is listed as “CORE‘s corporate partner in the quest for bio-tech information.”

At the same time, CORE organized what it called the “UN World Conference on Biotechnology.” The closing address for the conference was made by Gerald Steiner, Monsanto’s Executive Vice President.

CORE has been accused by the state of “browbeating companies into donations.” In 1981 they were accused of illegal fundraising practices, and questioned for the way they represented themselves.  As part of a settlement, Innis admitted to no wrongdoing, but paid $35,000 out of his own pocket to CORE. He charged racism. An ex-CORE employee who worked in the call center described the fundraising process as “racial hustle.” [5]

In 2004, CORE released a publication called Eco-Imperialism: Reflections on Earth Day, arguing that:

“Eco-imperialism” is seen by CORE as denying impoverished people the chance for better lives and the ability to rid their countries of diseases that were vanquished long ago in the United States and Europe.