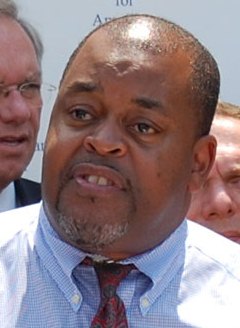 Niger Innis is the National Spokesman for the Congress of Racial Equality (CORE), a group that has recently aligned itself with numerous conservative think tanks and “anti-environmental” organizations while maintaining a stance skeptical of man-made climate change. He is also the son of CORE National Chairman and CEO Roy Innis. CORE has received at least $325,000 from ExxonMobil since 1998, with some of these funds earmarked for “global climate outreach.” [2],  [1]

In addition to his role at CORE, Innis is a member of the Advisory Committee of the National Center for Public Policy Research Project 21. NCPPR has a number of ties to the American Legislative Exchange Council, a lobbying group that has helped model a variety of bills for special interest groups. More information on ALEC is available at the Center For Media and Democracy’s ALEC Exposed project. [1]

According to a Mother Jones article published by Chris Mooney, Niger Innis has said that the terms “eco-imperialism” and “eco-slaughter” should be household words. [3]

“[Climate change policies] are really just a way of raising the price of energy and forcing citizens to adopt a lower standard of living, rather than ‘solutions’ to climate change. We are extremely skeptical of the motivations behind these proposals, especially since these programs will almost certainly not result in any measurable change in future climates.” [4]

Innis told journalists and others attending an Earth Day discussion at the National Press Club:

Niger Innis was a speaker at the “Affordable Energy Summit 8.0” in Las Vegas, Nevada, which was co-sponsored by the Heartland Institute and the Libertarian Party of Nevada. [6]

According to the Affordable Energy Summit’s “Events” webpage, the purpose of the summit was to “discuss the costs of climate change, as well as the fiscal and environmental impact of the so-called ‘Clean Power Plan.’” [7]

The “Events” page of the Affordable Energy Summit’s website goes on to state that the speakers at the National Clean Energy Summit, which took place just one day earlier, “believe that evidence of man-made global warming is enough to justify any action intended to solve the problem, without regard for effectiveness and without any regard for the expense.” [7]

At a luncheon talk at the Montana Petroleum Association annual meeting, Innis called for the production of “more of everything” including solar and wind power as well as “good old-fashioned fossil fuel.” The Billings Gazette reported that Innis “blasted environmental groups – repeatedly calling them ‘the green mafia” – and the ‘elite media” saying they were trying to stop energy development.” [8]

“We intend to make this Earth Day a clarion call  for human rights and more responsible environmentalism,” Innis said. [5]

Innis responded to a protest of ExxonMobil’s history of human rights violations, and what protestors described as “deliberately deceiving the public by manipulating and misrepresenting solid science on global warming.”  [9]

Niger Innis described the protestors as remnants of “the anarchists, socialists, communist types of the 1960’s” and requested to testify on ExxonMobil’s behalf. When the protestors refused, he described them as “arrogant” for opposing economic growth. [9]

Niger Innis has primarily written on topics related to civil rights, including this article in the Spring 2002 edition of American Outlook. [11]